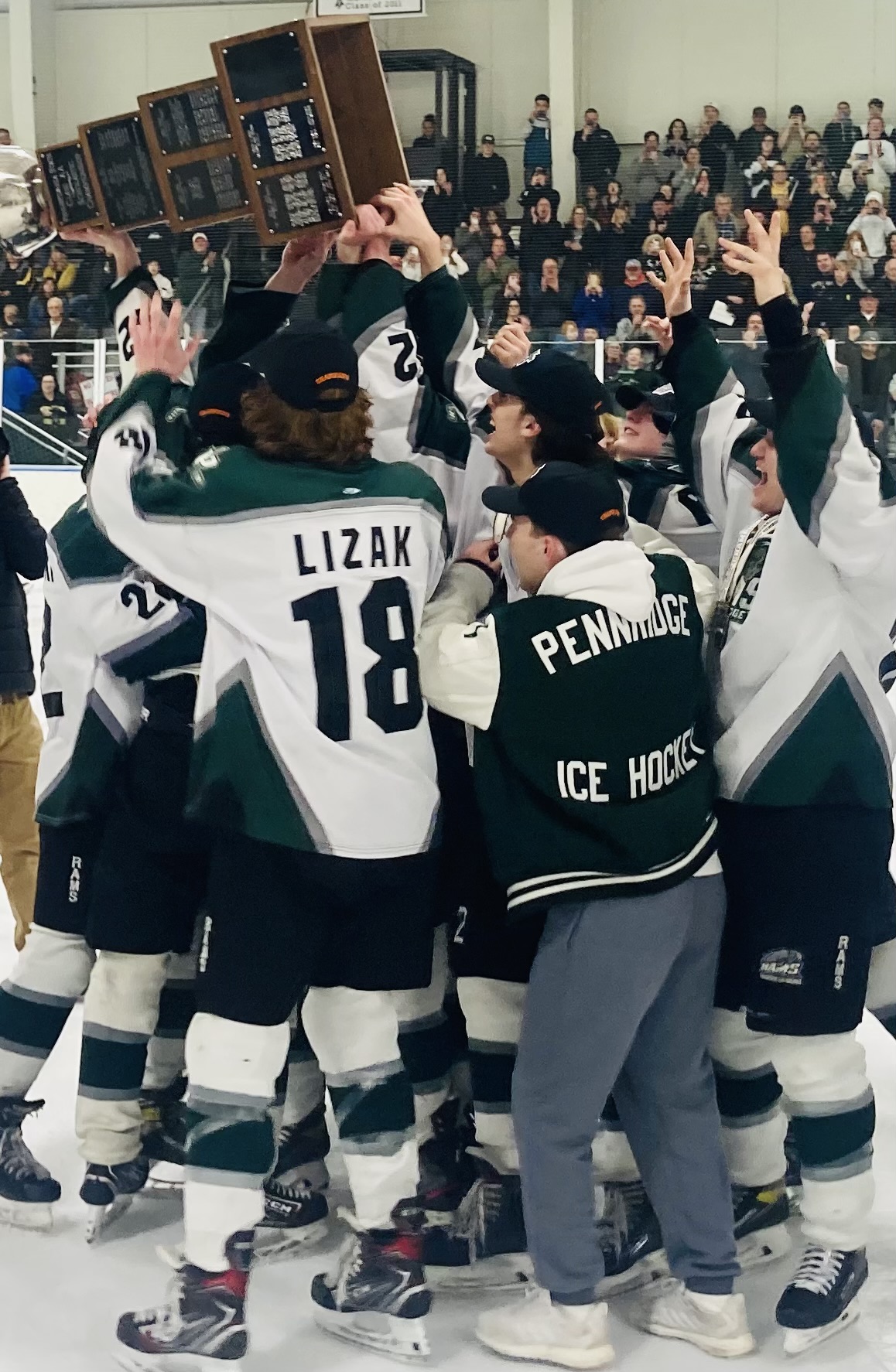 WEST CHESTER — After 80 minutes of hockey, against its toughest opponent of the season, Pennridge found a way.

With 4 minutes and 59 seconds left in the second overtime, Kevin Pico scored off a rebound, lifting the Rams to a 4-3 win over Thomas Jefferson in the State Final Saturday afternoon in front of a standing-room-only crowd at Ice Line.

Undefeated Pennridge, Champions of the Suburban High School Hockey League Continental Division and the 2A Flyers Cup Champs, finished the season 22-0-1. The Rams led the Penguins Cup Champion Jaguars 2-0, battled back to tie it 3-3, then prevailed in OT in a marathon of a contest.

“I feel amazing…State Champions,” Pico said. “Everyone was gassed. Both teams were gassed. It’s whoever wanted it more.”

Kevin’s brother, Ryan, was instrumental at the other end, stopping 62 shots in all.

“He was unbelievable. I’ve never seen him play that well in my whole life,” Kevin said. “Even the goals that went in, he was right there for them. He was there for every shot.”

“Ryan Pico was absolutely incredible,” echoed Montagna. “He kept us in there.”

Ryan Pico makes another save for Pennridge in its win over Thomas Jefferson on Saturday, March 26, 2022. Kev Hunter, MediaNews.

“We were still trying to roll three lines and they still had nothing (left),” said Montagna. “You hope that when teams get tired, they make a mistake defensively. And we made one at the beginning of overtime and it didn’t cost us.”

Said Montagna of the focus on the offensive end: “Try and get traffic and try and get rebounds.”

Kevin Pico scored in double overtime to lift Pennridge to a 4-3 win over Thomas Jefferson on March 26, 2022. Kev Hunter, MediaNews.

Midway through the first, Jack Lowery scored on a power play to double the Ram advantage to 2-0.

Thomas Jefferson worked its way back into the contest, cutting the margin in half on a second-period goal by Colby Bilski. Bilski scored again early in the third and then Lance Smith put the Jaguars up for the first time, 3-2, with 9:29 left in regulation.

There was much more hockey to come.

The Rams got the equalizer from Tyler Manto with 4:59 left, as he was able to beat keeper Billy Siemon (45 saves).

The two teams would skate into overtime, and another.

“When they tied it and then went up, there was not an ounce of panic on our bench,” said Lowery. “We were calm. We knew we had come back in multiple games before. Every championship game that we’ve been in, we’ve been down. There wasn’t a doubt in our minds that we were gonna come out on top. I love these guys. They go to battle every day. These guys are my family. I wouldn’t rather play on any other team.”

The Rams captured the program’s first Flyers Cup title and now have a first-ever state title trophy to go with it.

“It feels good. The job is finally finished for us,” Lowery said. “That’s a heck of a hockey team we played today. It really could have gone either way. But we came out on top. We played our game and that’s all we can do.”

Said Montagna: “That was by far the best team we played all year. And we did not have a lot left in overtime. It’s incredible, just absolutely incredible. I’m just so proud of these guys.”