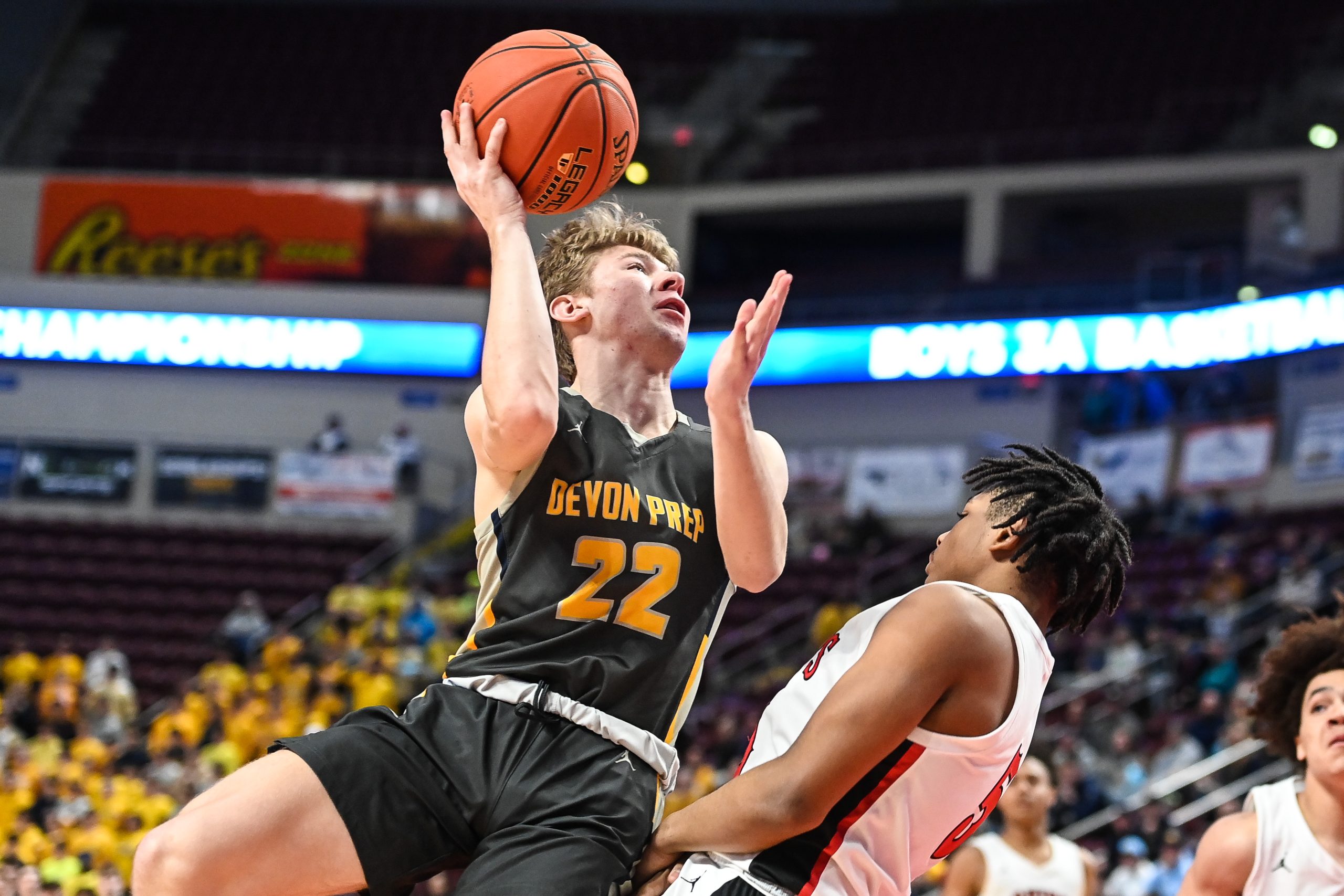 HERSHEY >> The Devon Prep basketball team went to the Giant Center on Saturday afternoon on a mission to capture the first PIAA 3A title in school history.
Mission accomplished.
The Tide went on a splendid 25-0 run in the middle two periods en route to a dominating 76-58 victory over Aliquippa to take home the coveted state championship.
Devon (19-7) put five players in double figures with junior Lucas Orchard leading the way with 17 points, while Jacen Holloway added 16 to lead the balanced attack. They also shot a torrid 26 for 50 from the field as they broke open a tie game with a 25-0 run that spanned the last 2:23 of the second period and the first three-plus minutes of the third to put away the Quips (21-9).
“We just decided to start playing better defense in the second period,” Orchard said. “We just turned things up on them and that is what gave us the game. We all trust each other on this team and we do not care who scores the most points or anything like that. To win this title is a dream come true and we really played well today.”
Orchard tallied 15 of his team-high 17 points in the first half. With the score tied at 34-34, the Tide scored the last nine points of the period to take a 43-34 lead at halftime.
Ty Mishock scored two baskets off Aliquippa turnovers late in the second. Mishock scored 13 points on the game and played very good defense the whole way. An Orchard 3-pointer also helped the run that Allen Cieslak closed with a driving layup.
“We just decided to turn up the pressure and run them off the floor,’ Cieslak said. “We got some fast-break points during the run. They could not keep up with us. It is just a great feeling to win this state title and in fact, I almost started crying after the game. Just a great feeling.”
The Tide put the game away by going on a 16-0 run to start the third, effectively putting the Quips out of the game. IV Pettit, who drained four three-balls for the game and scored 15 points, hit two long treys. Cieslak added another one and two inside baskets from junior Jacen Holloway put Aliquippa on the ropes. The Tide drained 10 threes for the game.
Aliquippa missed its first seven shots of the third, while Devon Prep was on fire, shooting seven-for-13 from the field in the period and held a 64-47 lead heading into the fourth. They could sense the state title was theirs.
“This is just an awesome feeling,” Mishock said. “We had balanced scoring today like we have had all season and this team just comes together and gets the job done.”
Devon Prep outscored the Quips 21-13 in the third period and you could see the Quips players sagging as they chased Devon Prep all over the court. Devon was moving the ball around and getting good open looks the whole game and Aliquippa could not keep up.
The fourth period saw the Tide take the air out of the basketball. Pettit dashed any comeback hopes when he drained a long three-ball to start the fourth. Devon only turned the ball over 10 times for the game and cruised to a convincing state title game win.
“I don’t think it has hit me that we won a state championship yet,” Devon coach Jason Fisher said.”We moved the ball well and we picked up our defense and sped them up in the second period and they were not comfortable with that kind of pressure. This team plays in the Philadelphia Catholic League and in that league, you have to play your best every night or you will get blown off the court and that experience really prepared us for this tournament.”