McCaffery: In ‘blink of an eye,’ Maggie Doogan and her mom added to O’Hara lore 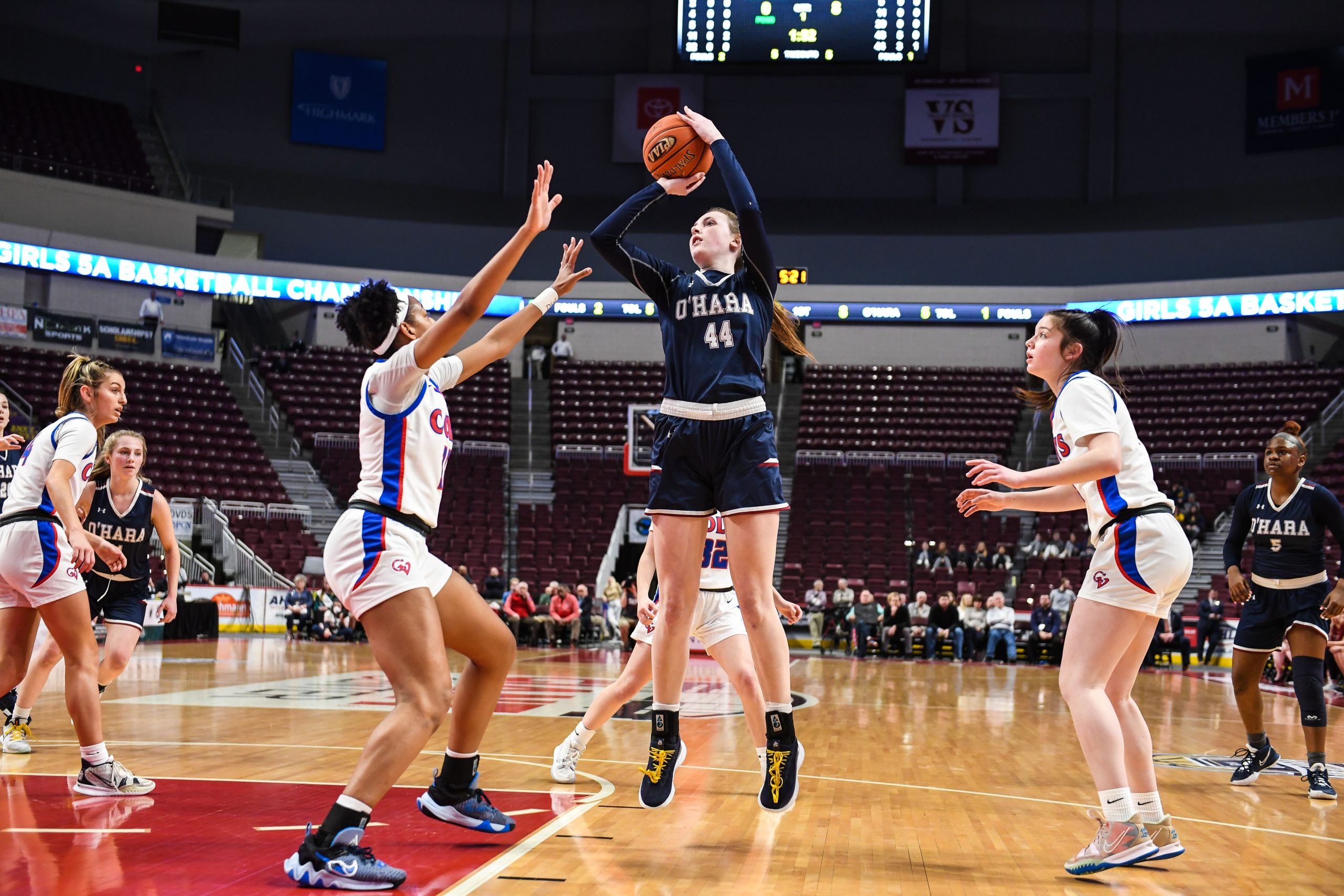 Maggie Doogan of Cardinal O'Hara shoots against Chartiers Valley in the Class 5A PIAA girls final at the Giant Center Friday. Mark Palczewski - For MediaNews Group

HERSHEY — One by one Friday, in the tradition of PIAA state championship teams, Chrissie Doogan would drape a gold medal around the neck of each of her players.

For each, she had a hug.

For each, she had a smile.

For each, she had pride.

For each, she had gratitude.

Then, the girls basketball coach at Cardinal O’Hara came to the final player in line, and that’s when the video board high above the Giant Center revealed that she had just a little bit more.

“We did it,” she told her daughter, Maggie Doogan. “I love you, Maggie.”

The Lions did plenty during the season, during the postseason, and finally in the Class 5A championship game, a 42-19 triumph over Chartiers Valley. In the process, they would be the first team in the generations-deep tradition of O’Hara girls basketball excellence to win both the Catholic League championship and a state championship. And even if some of the most glorious Lions teams – including the one Chrissie played on as a senior in 1993 – were not yet PIAA members, the 2022 Lions were high among the best.

But in a different way than whatever O’Hara did in that season to remember, there was what Chrissie and Maggie had experienced together, a four-year run of challenges and championships that began long, long before the trip to Hershey.

“I love O’Hara,” said Maggie, who scored 12 points and collected eight rebounds in the championship game. “Whenever I figured out what O’Hara was, that’s when I wanted to go there.”

The younger Doogan understood what O’Hara was because her mother made sure of that, years before she agreed to return to her alma mater as the head coach. She understood that O’Hara was thriving in girls basketball for more than 50 years, and that there would always be a responsibility of the current players to extend the tradition.

Chrissie laughed at that story.

“In my defense, the O’Hara gym was being renovated at that time,” she said. “So that was our only option for camps.”

Whether at O’Hara or Carroll, Maggie was well-conditioned as a basketball player, and that was on display Friday as the Lions won their second consecutive state championship.

“I am super proud of her,” Chrissie said. “She set goals for herself and she put a lot of pressure on herself during the year. I would find her, not in tears, but really nervous sometimes. I would tell her, ‘Mags, a state championship or a Catholic League championship won’t define you. Where you started to where you have gotten is really remarkable.’ And I am just proud of her and all the seniors, and how far they’ve come.”

While O’Hara won with relative ease Friday, the journey was not uncomplicated. As a freshman, Maggie did not start, her mother keeping the same rule for every player: Playing time would be earned, not inherited. By her junior year, Maggie was the Daily Times Player of the Year. By her senior year, she was as much a legend as any to have played at O’Hara.

“I am really lucky to be a part of such a great program.”

Technically, she will always be a part of the O’Hara program, a couple of state championship banners hanging in that renovated gym shouting out her story. But there was a finality to the last quarter of the game Friday, when Maggie and Chrissie were aware that it would be the last time they would be sharing the O’Hara bench.

That’s how it seemed. Sometimes.

“Well, it went a lot faster than that fourth quarter tonight,” Chrissie said. “I kept looking at the clock and saying, ‘Come on, move.’ But, yeah. It did go by fast.”

Next season, Maggie will play for the University of Richmond, while Chrissie will continue to maintain the winning O’Hara tradition. Already, she has her eye on a particular talent: Sixth-grader Catie Doogan, her younger daughter.

“Nine-thirty tomorrow morning, she has an AAU game,” Chrissie said. “I will be there.”

It will seem early. But, as Chrissie and Maggie Doogan were reminded Friday, it’s worth the ride.