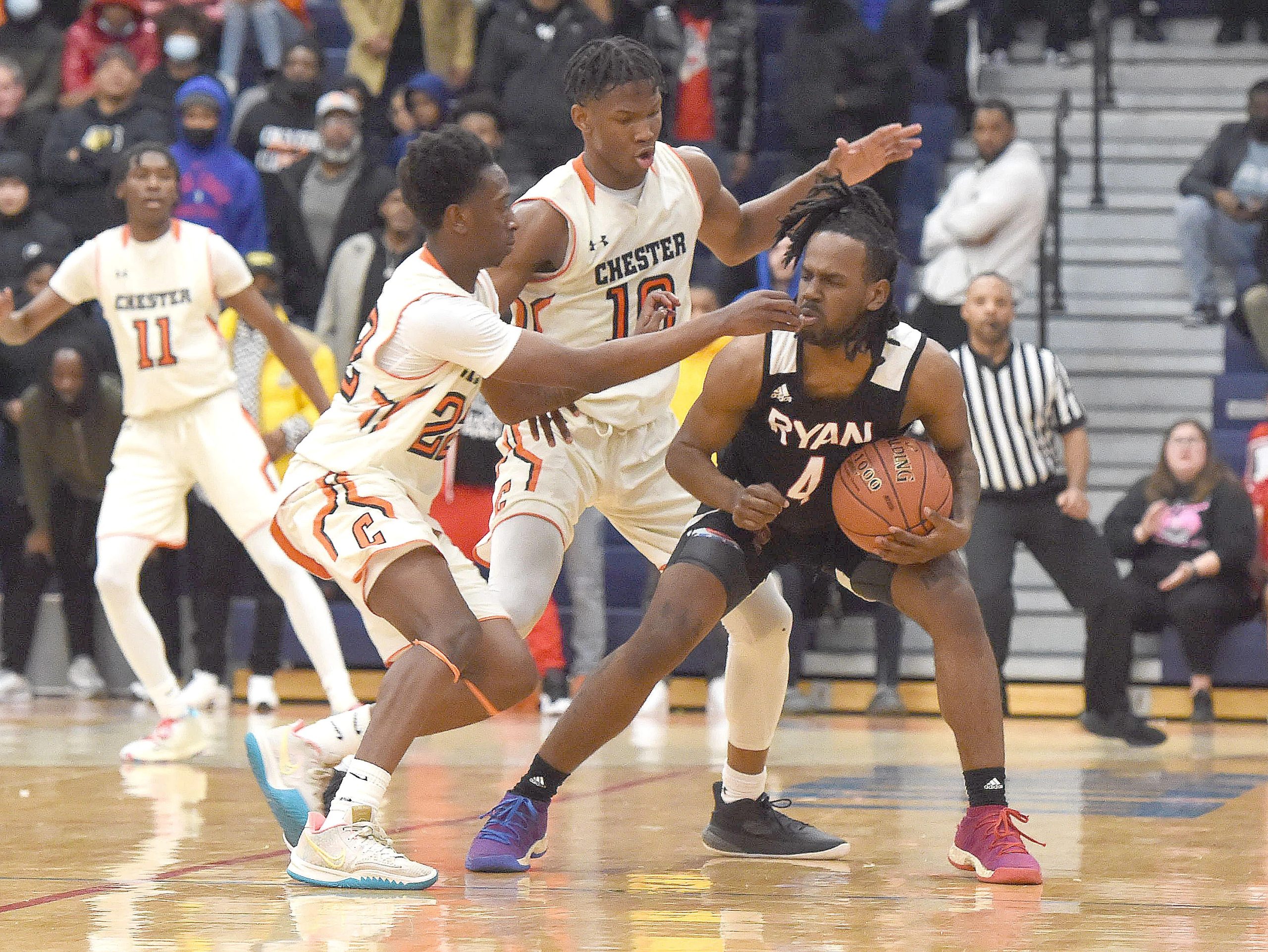 Chester's Kyree Womack, left, and Larenzo Jerkins pressure Ryan's David Wise in the second half Friday night at O'Hara. Chester came from behind to defeat Ryan 53-48 to advance to the PIAA Class 5A quarterfinals. (Pete Bannan - MediaNews Group).

For Chester, it was the memory of a dramatic win, a run that wasn’t, of a fallen brother memorialized on the basketball court. For Archbishop Ryan, there was the weight of a demolition of Chester in the state semifinals last year and the hunger that would undoubtedly spark on the opposite bench.

Then there was the future, which for the hundreds of boisterous fans in attendance wearing Chester orange-and-black, came wrapped in the 5-10 package that is Kyree Womack.

Chester’s Kyree Womack attacks the basket in the second half Friday. Chester came from behind to defeat Archbishop Ryan 53-48 to advance in State playoffs. (PETE BANNAN- DAILY TIMES)

Womack played the hero again, with 11 fourth-quarter points to cash in the suffocating vise grip of Chester’s full-court press that finally squeezed out Archbishop Ryan in a 53-48 thriller in the PIAA Class 6A Round of 16.

“Big-time players make big-time shots,” Womack, a developing authority on the subject, said. “The ball was supposed to be in my hands (in the) fourth quarter. … I just thank my team for playing good defense and keeping the pressure on them. Game of runs, we didn’t break down.”

The Clippers were playing on familiar ground. It was on this court two years to the day ago that Zahmir Carroll hit a 3-pointer at the buzzer to lead Chester past Simon Gratz in the second round of states, a game played for JV player Edward Harmon, who’d been shot dead the day before. Chester’s journey then went unrequited, the state tournament canceled by the COVID-19 pandemic.

Neither Isaiah Freeman, then a sophomore at Strath Haven, nor Womack, then an eighth-grader, played that day. Both were in the building, though. And Friday’s atmosphere brought back the memories.

“We talked about it all week,” Womack said. “We wanted to play at O’Hara, same crowd. We came out here and fought.”

Then there was last year’s obliteration of the Clippers in the state semifinals by a senior-laden Ryan team, 85-63. The Raiders (19-8) would go on to lose in the state final, and the Clippers would bide their time.

“It was personal,” Freeman said. “All week, we told each other, this was personal. We’re not going home. Four more games. One game at a time. We didn’t have a doubt in our mind.”

Back in the present, the Clippers turned an ugly first half all around into, well, an ugly third quarter for just Ryan. The Raiders turned the ball over 10 times in that frame, Freeman pocketing most of them. The Lincoln University-bound quarterback brandished his old middle linebacker skills, dropping back into centerfield zone coverage and picking off passes at will.

One turnover at a time, Ryan came unglued at the seams. And a raucously partisan Chester crowd ratcheted up the volume at every turn.

Chester’s Isaiah Freeman hangs on the way to the rim as Jalen Snead defends in the second half Friday. Chester came from behind to defeat Archbishop Ryan 53-48 to advance in State playoffs. (PETE BANNAN- DAILY TIMES)

“Isaiah is the captain of the team,” Womack said. “He’s not going to give up on nobody. If we mess up or not, he’s going to fight.”

Ryan led 26-18 at half, thanks in large part to its play through the post. Thomas Sorber dominated early. He finished with 13 points, seven rebounds and eight blocks, many victimizing Larenzo Jerkins, who suffered through a 5-for-15 shooting night.

But Jerkins adapted, taking out his energies on denying post entries, a key source of turnovers.

Like a crowd that had seen this show play out before, the Clippers’ fans turned up the noise even when Ryan stretched the lead to its largest at 33-22. Three free throws by Qadir Lowrie stoked the chants. Kevin Rucker added an and-1, then Jerkins hit a pair of 16-foot jumpers late in the third to trim Ryan’s lead to 37-34 after three.

It would be part of a 16-5 run, Jerkins handing off to Womack for his usual late show.

The guard put Chester up with two free throws at 38-37, then drove the ball right down the throat of Ryan’s defense when it had gone back up, hitting a runner in the lane.

Finally came the piece de resistance, mirroring the shot he hit late in the District 1 final win over Radnor: A banked-in 3-pointer to put Chester up 45-42 with 2½ minutes left.

“It’s nothing new to us,” Freeman said. “Since third grade, you knew what he could do. Same thing, game after game, he lives for these big moments. These are his games.”

Ryan’s Sorber led the scoring, on just eight field goal attempts. Jaden Murray added nine points, Jalen Snead and Michael Paris eight each. Snead missed three fourth-quarter free throws, as Chester wobbled to allow Ryan back within 50-48 with 90 seconds left before closing it out. Chester was 14-for-20 from the line.

With it came another momentous night in the program’s recent history.