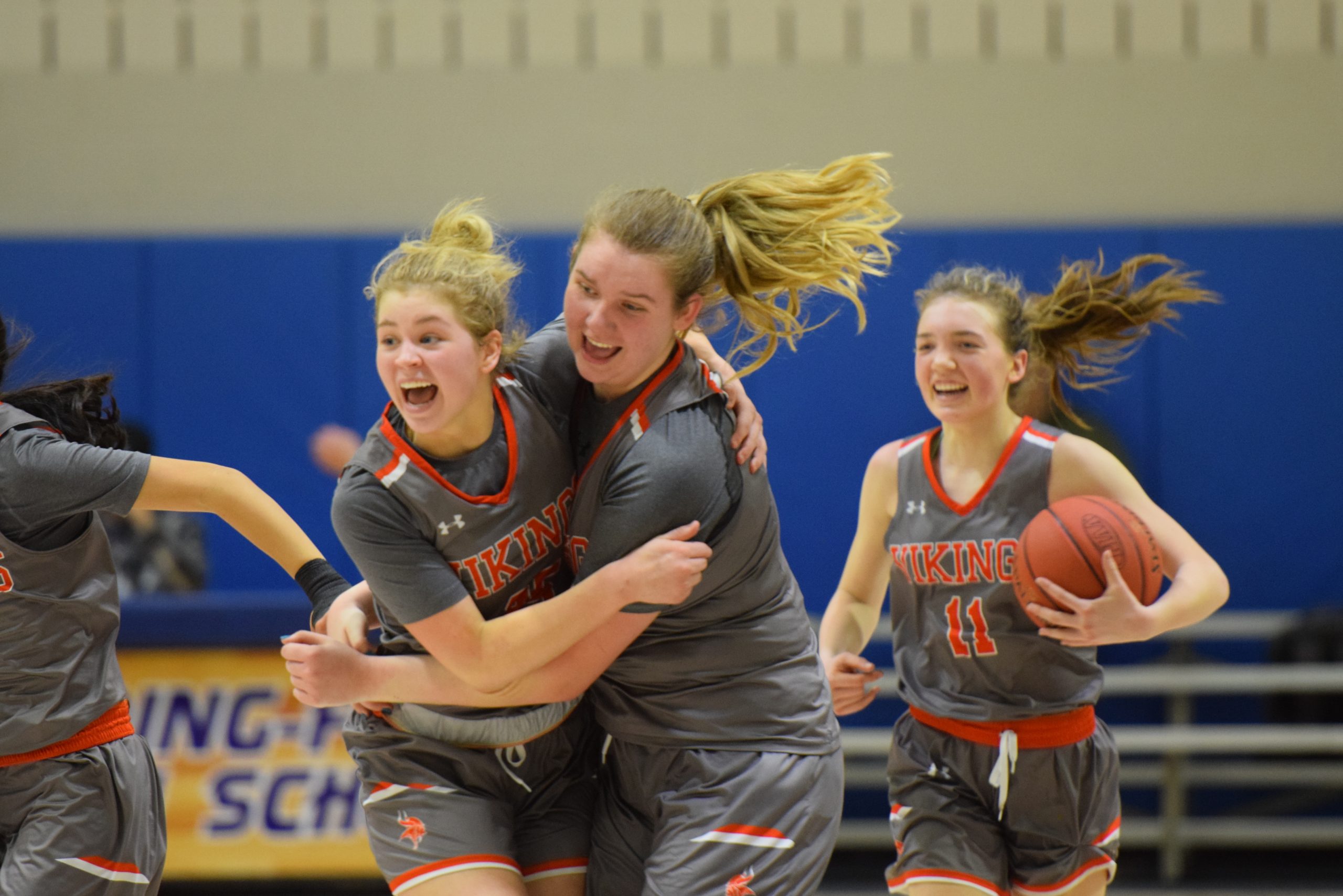 ROYERSFORD >> Methacton and Perkiomen Valley were slated to make Pioneer Athletic Conference girls basketball history before they even took the court Friday night.

A combination of youth and experience allowed the Vikings to carve out a piece of school history for good measure.

The Vikings upended PAC rival Methacton, 38-31, in the first-ever state tournament encounter between two PAC schools, achieving the program’s deepest state tournament finish ever by advancing to the quarterfinals.

“We knew from the beginning we could have a special season — and while it didn’t start that way, it’s certainly turning out that way,” said PV second-year head coach John Russo.

Senior Emma Miley and freshman Grace Miley tied for the scoring lead with nine points each for PV, but the real story was its defense, locking up the Methacton offense and leading scorer Nicole Timko, holding her to only four points and causing 18 turnovers on the evening.

Timko came into the contest hoping to become the PAC’s all-time leading scorer, but instead finishes her career with 1,748 points — one shy of the career mark set by Jamell Beasley, who played at Pottstown from 2000-2003.

“Nicole has been the face of our program for these past four years,” said Warriors coach Craig Kaminski.

Much of the work on Timko was performed by Lena Stein, one of several PV freshmen contributing to the winning effort. Stein locked onto Timko from the opening tip, and with help from frequent help defenders and sub Bella Bacani, held the senior guard without a field goal until the final 15 seconds of the contest.

“I definitely see myself as more of a defensive player,” said Stein. “That’s my main focus — fight through screens, work with my teammates. Honestly, it’s a big accomplishment for me to start a game like this and have such an important role [guarding Timko].”

Stein made her coach’s decision look brilliant early. PV was able to limit the Warriors to 11 first-half points en route to a nine-point lead at the break.
Stein and Bacani shadowed Timko around the frontcourt, cutting off passing lanes and contesting outside shots, while Quinn Boettinger’s three first-half blocks thwarted several of Methacton’s ventures to the rim.

The battle between Boettinger and Methacton’s junior forward Mairi Smith was pivotal throughout the contest. Smith ended as the game’s leading scorer (ten points) but it was Boettinger’s defense that discouraged the Warriors from getting the ball to Smith more consistently.

With four blocks and eight rebounds to compliment her six points, Boettinger turned in a performance that demonstrated poise beyond her years.

“Mairi’s a really good player, so when I got switched onto her I wanted to play her straight up. She got her points, but I was able to deny her the ball a number of times.”

Meanwhile, both Mileys hit early threes, PV connecting from distance four times in the opening half. The pace slowed after the break, but Park Valley’s 11-16 free throw shooting after halftime was the offensive difference in the outcome.

“It starts with our four assistant coaches, who have us tremendously prepared for each game,” said second-year PV coach John Russo. “And our seniors — they don’t treat this as their team, it’s our team.”

Perkiomen Valley’s Emma Miley scores on a runner over Methacton’s Nicole Timko during their PIAA 6A second round game Friday at Spring-Ford. (Austin Hertzog – MediaNews Group)

PV (23-7) moves on to a Tuesday night state quarterfinal against District 1 champion Plymouth-Whitemarsh, who moved to 28-0 with a 44-28 victory over District 11 runner-up Northampton in the opening game of the Friday evening doubleheader hosted by Spring-Ford.

In advancing to the quarterfinals, Perk Valley also broke the stalemate between themselves and the Warriors after they split in the regular season.
Like the first two encounters this season between the Warriors and Vikings, it didn’t disappoint. While PV never relinquished the lead, they also never moved ahead by nine points.

Methacton saw their 2021-2022 campaign conclude at a mark of 23-5. Seniors Timko, Tori Bockrath, Kayla Kaufman, and Caitlin Woolbert suited up for the Warriors one last time.

“Our senior class has had four amazing years,” said Kaminski. “They’ve brought so much to our program, and we’ll miss them incredibly.”

The final outcome belonged to the Vikings. But on the whole, the event and the evening belonged to PAC girls’ basketball – a matchup of two conference squads, played on the home court of a third PAC school, a venue traditionally asked to serve as a neutral site for large-scale contests (and home to a strong program of its own – Spring-Ford joined Perkiomen Valley in the state quarterfinals with a win over Central York Friday night.)
Friday’s contest served as confirmation of what the sport’s followers have known for some time – with a handful of perennial district playoff contenders and state qualifiers, girls’ basketball has cemented its spot as the PAC’s deepest sport in terms of quantity and depth of quality programs.

In the past decade, both Boyertown and Spring-Ford have claimed PIAA Class 6A titles, and Perkiomen Valley topped District 1 in 2016.

Now Class 6A is down to eight teams — 25 percent of which represent the PAC.

“If Methacton beat us, I’d be out here rooting for them next week,” said Russo. “Same for Spring-Ford. I appreciate everything those programs and others have done to set the bar for us moving forward.”

Methacton’s Kaminski, in his 20th year at the helm, has overseen the rise of one of league’s powers while matching wits with some top coaches and programs through his tenure.

“You’ve got Spring-Ford at the top,” he said, “PV is clearly another up-and coming team, and we’re in there as well.

“Boyertown won a state title a few years ago. OJR, PJP, they’re always contenders. It’s a great league — I have high praise for it and I love coaching in it.