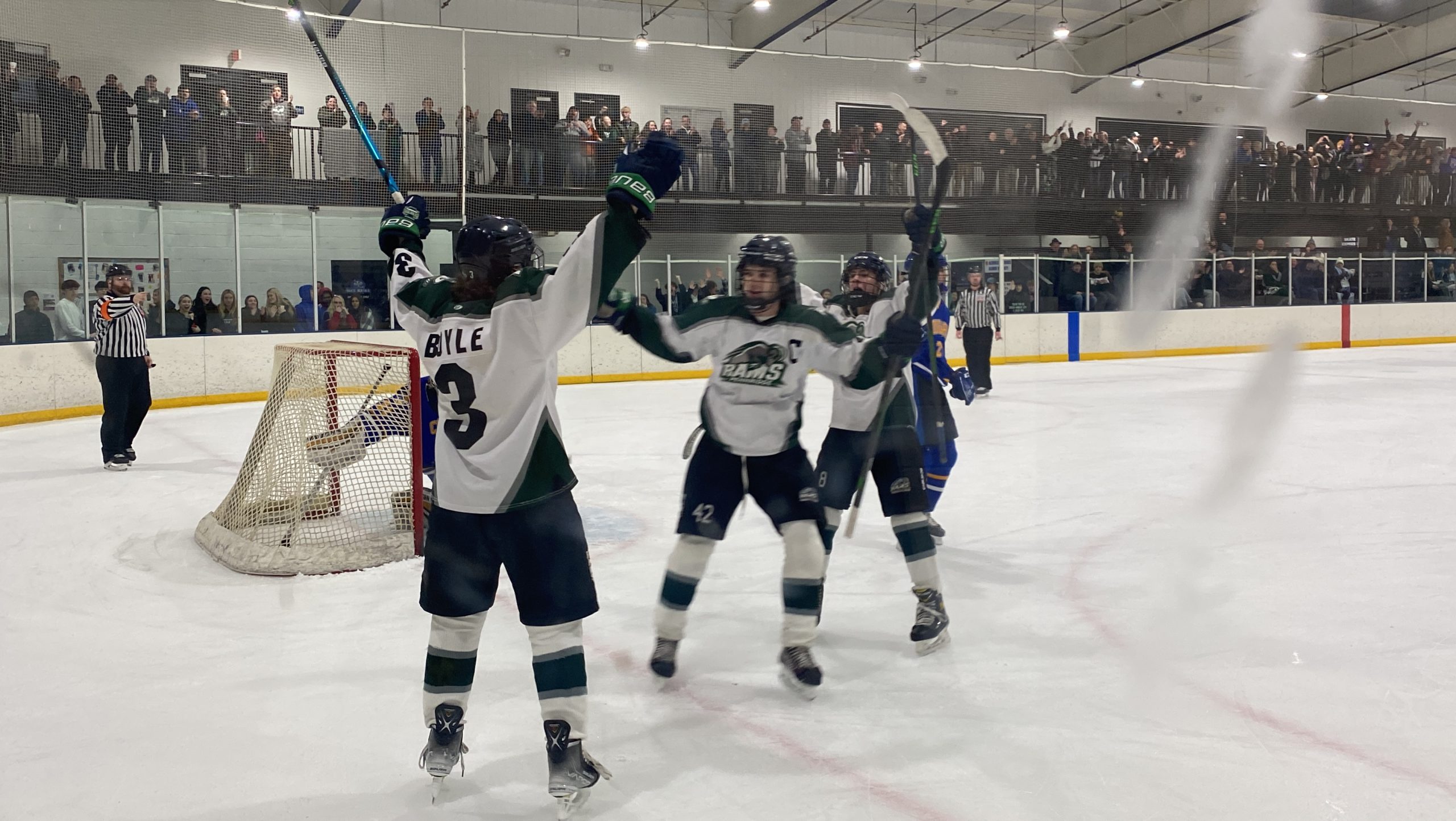 HATFIELD TWP. >> Even after Downingtown East grabbed a 4-3 lead early in the third period, Aidan Boyle and the Pennridge ice hockey team were confident Thursday night was not the end of the road.

“We all knew that we weren’t losing this game,” Boyle said. “We just went out there and said ‘Playing next week, we’re not going home tonight.’ And we got it done.”

The top-seeded Rams struck twice to go ahead of the No.8 Cougars with 6:41 remaining in regulation of the Flyers Cup AA quarterfinal matchup. East answered just 87 seconds later but Boyle provided the Rams with the decisive tally – breaking the 5-5 tie on the power play with 1:36 left and Pennridge advanced with a 7-5 victory at Hatfield Ice.

“They’ve owned the third period of every game we’ve played this year and even when they got that tying goal, we were outplaying them,” Pennridge coach Jeff Montagna said. “I thought we were wearing them down. They expect to win. They expect to win and luckily tonight they got it done.”

Boyle assisted on Colin Dachowski’s goal that knotted things 4-4 at 9:17 in the third with Aeryk Lehrhaupt knocking a rebound in after Andrew Savona’s drive to the net to give the Rams the 5-4 edge.

Parker Nassour put a shot in at 5:14 to pull Downingtown East level but Pennridge netted the game-winner on the man advantage. Kevin Pico was denied at the right post by Cougars goalkeeper Ian Warter but Pico tapped the loose puck across the crease to Boyle alone on the opposite side – the senior defenseman delivering a shot into the open goal.

“Kevin Pico just found me backdoor,” Boyle said. “And just had a wide-open net to tap it in.”

Shane Dachowski sealed the win with his second goal, an empty-net tally with 55.1 seconds left as the Rams advance to the Flyers Cup semifinals for the second straight season and the third time in the past four years.

“Honestly, we’re a pretty good third-period team,” Lehrhaupt said. “We play on emotions in the third period, we go into the locker room, we have great leadership, we got great locker-room guys like Jack Lowery, Pierce McGinley, guys that get you ready to go out and win a hockey game. And honestly that’s the big difference for us.”

Jack Wolf registered a hat trick, scoring a goal in each period for Downingtown East, which was trying to reach the semifinals for the first time since 2019 when the Cougars claimed the last of three straight Flyers Cup titles.

“It was one of those games where it could of gone anyway,” East coach Brian LaBuono said. “My guys played their hearts out. Credit to both teams and super proud of my guys.”

Warter made 39 saves in facing 45 shots for the Cougars while Pennridge goalie Ryan Pico posted 27 saves on 32 shots.

“As I just told them in the locker room Pico’s been our rock for three years and on a night when he wasn’t on top of his game we picked him up,” Montagna said. “And said you watch the NCAA basketball tournament, the team that wins always has one game where they’re on the ropes and the word I like to use in this is facing their mortality and they did that and like they have all year they responded. They do it every game.”

After both sides scored twice in the opening period, Pennridge took a 3-2 lead at 12:05 in the second. Lehrhaupt sent the puck into the crease as Boyle drove toward the net with the puck sliding over the goal line.

Wolfe, however, tied it on a short-handed tally, charging to the net and scoring at 10:44. The score stayed 3-3 until Wolfe finished his hat trick by finding the back of the net at 14:23 in the third.

Boyle set up the Rams’ equalizer with 9:17 left, cutting through the defense on the right side then sliding a pass to Colin Dachowski to make it 4-4.

“He’s a special offensive talent, he really is,” said Montagna of Boyle. “We give him a lot of freedom and he’s a defenseman who we give a lot of freedom. It’s the good with the bad with him sometimes but he’s really good offensively and he’s still learning to play defense, he’s only done it a couple of years.

“And you saw it tonight, he had a huge game – two goals I think he had and a couple assists. He was great tonight and he was in the right spot there on the game-winner.”

Pennridge went up 5-4 as Savona drove to the net from the left side and tried to score at the right post. Warter stuck out his left pad to deny the shot but Lehrhaupt came in to definitively put it over the goal line at 6:41.

Nassour’s goal at 5:14 had the teams tied once more but Boyle’s power-play tally with only 96 seconds to go in the third put Pennridge up for good.

“When you’ve got a guy like Boyle who can play both ways you obviously trust him with the puck,” Lehrhaupt said. “And when he can just make things happen like that, especially in the clutch moments at the end of a game, he’s unbelievable.”

Downingtown East had a quick 1-0 lead in the opening period as Jacob McCallion scored at 14:59 but Kevin Pico scored for the Rams just 1:35 later.

Wolfe’s first goal had the Cougars back up at 9:22 before Pennridge tied it again at 2:54 – Lehrhaupt, from behind the net, sending a puck out front to Shane Dachowski, who put a shot into the top of the net.