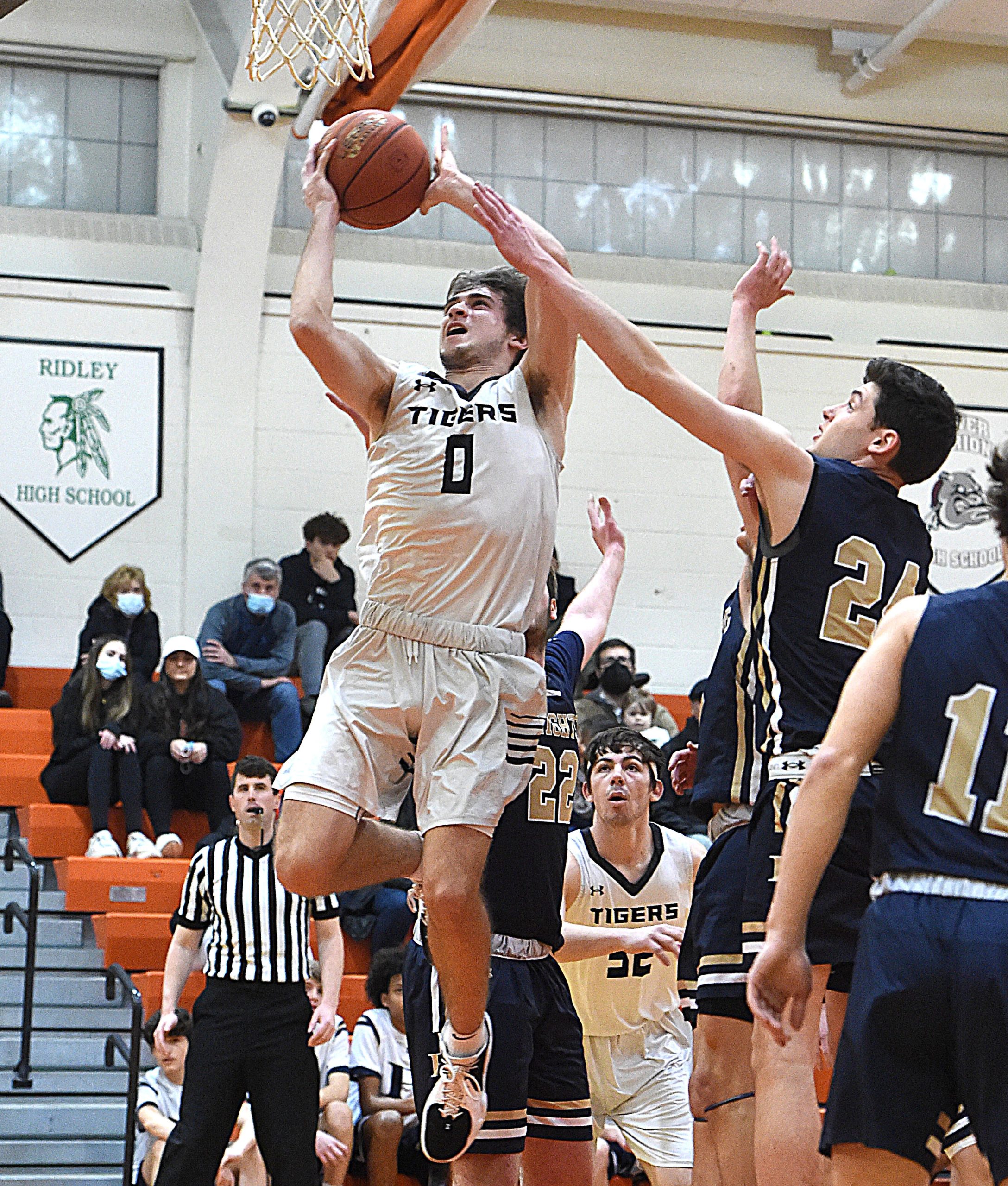 POTTSVILLE – The first couple of times, PJ Esposito could hear the command but didn’t execute.

Situated as far away from the Marple Newtown bench as he could be, the sophomore nestled in the far corner at Pottsville’s Martz Hall, twice passing up looks when Marple’s offense swung the ball his way.

The third time, as the calls from the bench crescendoed, he obeyed.

And when his 3-pointer splashed home, the complexion of the game changed.

Esposito’s 3-pointer keyed a second-quarter awakening, as the Tigers shook off a sleepy start to roar past District 11 champ Pottsville, 53-43, for the program’s first states victory. Marple Newtown (17-10), the fifth seed out of District 1 in the Class 5A tournament, advances to the Round of 16 Friday against District 12 third-place team Mastery Charter North.

Chalk up another bit of history for the Tigers, who qualified for states for just the second time, the only other time coming in 1995. The reason was a pair of players more in the future of the program than the past.

“I finally got confidence in that corner to shoot the ball and it went in,” Esposito said. “I ran back down the court feeling great. And that’s why my next one went in, too. I was confident shooting after that.”

Esposito scored seven points in the first half, on the way 12. Matt Gardler, a freshman, hit two 3-pointers in the second quarter, part of a 15-6 edge in the frame that turned the game on its ear.

The development of the two underclassmen has helped fuel the Tigers’ growth as the season wore on.

“I personally think it’s been huge, both of them getting on the floor, putting up shots,” guard Eric McKee said. “I think they’re two of the best shooters on our team, so getting them open looks is very big for us.”

McKee, with fellow senior guard Justin DiBona, have created the space for them to flourish. And so, on a day where DiBona and McKee shot 2-for-13 from the field, the Tigers still rolled.

Part of it was the Crimson Tide being knocked out of their rhythm by the moving target of what exactly constituted a foul. Pottsville was whistled for 23 infractions to Marple’s 11, leading to a 32-5 disparity in free throw attempts.

Point guard Darren Yost was saddled with early foul trouble that contributed to a 1-for-10 shooting day. Starters Mike Sukeena and Raeff Dicello fouled out, while a weak technical foul on Jazce Carabello-Snowell gifted the Tigers a five-point possession early in the fourth to make it 44-31. Carabello-Snowell led all scorers with 19 points. Chase Fenstermacher chipped in 10.

Still, Marple had to make its foul shots, which it did 23 of 32 times to suffocate the Tide. And plenty of fouls resulted from a 25-21 rebounding advantage, with Owen Mathes (13 points, eight rebounds) and McKee (12 points, seven boards) flat outworking Pottsville.

Poise mattered, too: Marple had two points through six minutes of regulation, getting but clanking open looks in the lane. Instead of panicking, the Tigers stuck with it, even in a hostile environment.

“We understood coming here we had nothing to lose,” McKee said. “It’s not on our home court. There’s a bunch of fans here from Pottsville. We were just coming here ready to play and do our thing, basically.”

For all the youthful brilliance on display, the game ended with McKee and DiBona bleeding the clock, Pottsville not fouling with 30 seconds left to let McKee dribble it out. The two seniors, who’ve helped the program reach new heights while fostering the next generation they hope will take it even further, got to share an embrace at the final horn.

“It’s really exciting,” McKee said. “We came in here as freshmen trying to do the best we could do all four years. And with us leaving the program like this – and it’s still not over – it feels great.”