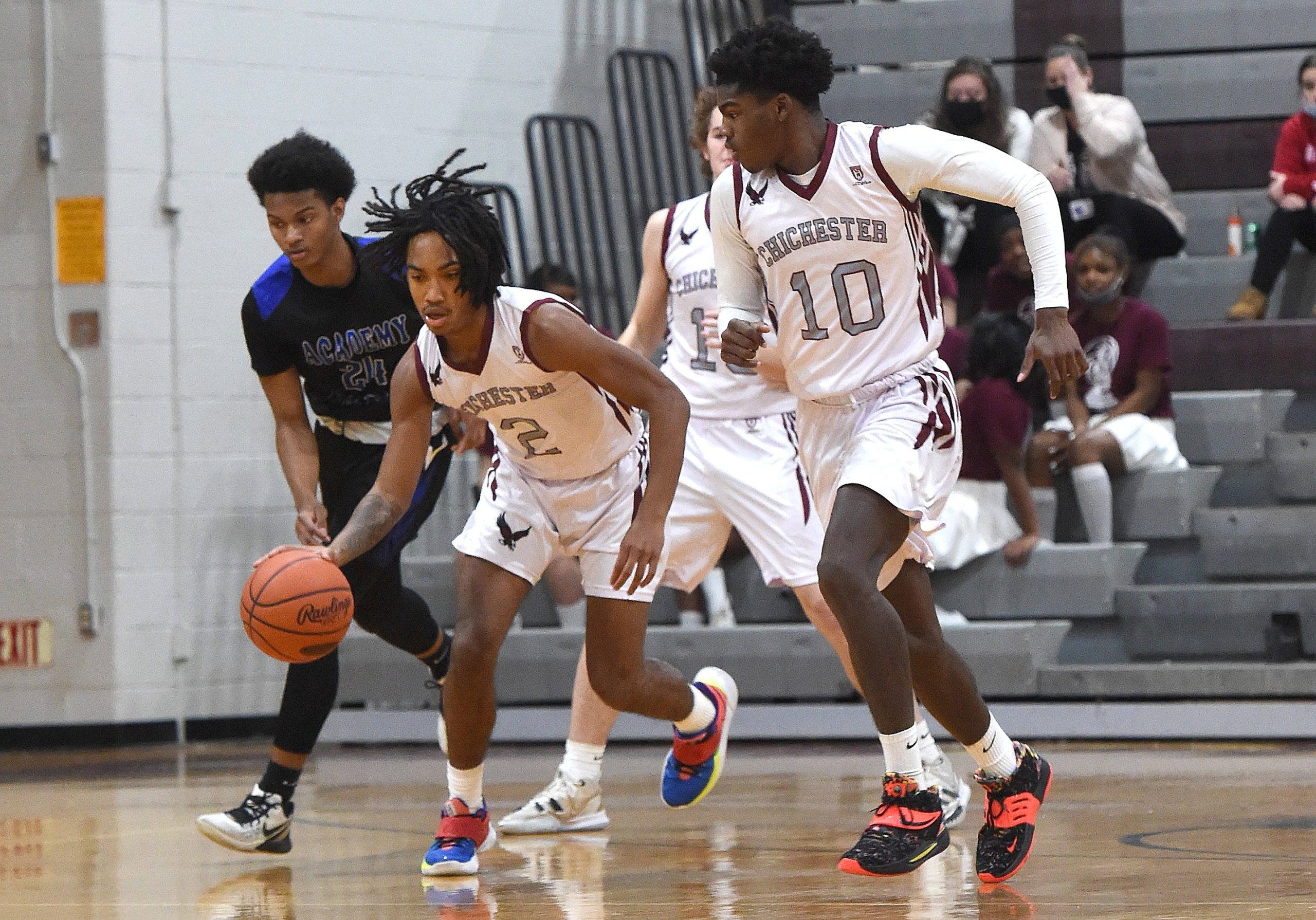 Chichester's Akhir Keys pushes the ball upcourt in a January game against Academy Park. Keys scored 16 points to get the Eagles to states with a 37-36 win over Sun Valley Saturday. (PETE BANNAN - DAILY TIMES)

ASTON — As the head coach at Penn Wood High for 11 years, Clyde Jones usually could figure out most Del Val League basketball mysteries.

One, though, kept him puzzled: How could rival Chichester, so often blessed with good players and tucked in ever-basketball-fertile Delaware County, never have qualified for a single PIAA state tournament?

To find out, he accepted the Eagles’ coaching job five years ago, fought through a rebuilding process, and by Saturday, helped put an end to that question.

With a swarming defense, a late three-point shot from Zaiyin Keys and 16 points from Akhir Keys, Chichester would nip host Sun Valley, 37-36, in a PIAA District 1 Class 5A playback to secure its first state tournament berth.

Behind Jones, who coached Penn Wood to the 2009 PIAA Class AAAA state championship and later took Girard College into the tournament before accepting the Chichester job in 2018, it didn’t take long.

“It’s the reason I wanted to come to Chi,” he said. “They had talent and I just thought it was a budding basketball community. To get an opportunity to start or rebuild a program was just something I was looking for. And being in the Del Val for so long, I knew the area, so I said, ‘I’ll give this a shot.’”

Saturday, Jones gave Zaiyin Keys a shot in a one-point game, and his 3-pointer gave the Eagles a two-possession lead with 37 seconds left.

Chris Kwaidah made a free throw with 20.8 seconds showing, and Todd Harper added a pair with 4.9 seconds left to draw Sun Valley within a point. When Chi went out of bounds on the opposite baseline and then was hit with a five-second inbound violation, the Vanguards had one last chance to win that tournament berth. But when the final possession failed, Sun Valley settled for a 15-11 season and the Chichester fans unleashed an orderly mini-court-storm.

“I kept a free mind and just kept confident in my shot,” Zaiyin Keys said. “It wasn’t falling in the first half, but I kept shooting. Shooters shoot.”

As it was Saturday, neither side could maintain shooting accuracy, in large part due to defensive determination. Sun Valley’s Nick Gianakopoulos was a one-man rim-protection force, blocking 12 shots while scoring 14 points.

“He played here four years and we made the playoffs in three of the four and was one point this year from going to the state tournament,” Sun Valley coach Steve Maloney said. “He was great. He has nothing to hang his head about. The kids played hard. Hats off to Chichester. They made plays and we didn’t.”

So dominating were the defenses that Chichester didn’t produce a two-point field goal until Carlton Gordy’s short shot in the lane with two minutes left in the first half. The Eagles, however, rarely slipped at the defensive end, denying the Vanguards a single three-point field goal. On offense, they adapted, making six three-pointers of their own, including Zaiyin Keys’ essential game-winner.

“That was a great shot,” said Akhir Keys, his twin brother. “We needed that shot. And I had confidence in him.”

Jones never lost confidence that the Eagles someday would end that state-championship drought … although it was tested.

“My second year, we went 4-18,” he said. “And I was like, ‘Oh, my gosh.’ But in basketball, kids leave and you have to develop a program. I knew that what we had coming was pretty good. And I was willing to stick it out and wait.”

At 11-13, the 12th-seeded Eagles did have their trying moments this season, although their victory Saturday was their second of their season over their eighth-seeded neighboring rivals of the Ches-Mont League. In January, they won, 65-64, at Sun Valley.

“So this has happened to us twice against them,” Maloney said. “But give our kids credit. They kept fighting. A couple of months ago, we could have caved, but then we made a run.”

The Eagles will visit No. 7 Marple Newtown Wednesday for state-tournament seeding, then prepare for the 5A tournament, which will begin March 8.

“We just have to stay true to ourselves,” Zaiyin Keys said. “Practice hard Monday and relate that to the game.”

For the first time ever, Chi will be certain to show up.

“One of the things that was really good for us was the experience at Upper Moreland the other night, when they couldn’t hear any of my calls,” said Jones of a defeat that sent the Eagles into the playback bracket. “It was crazy. Now they have the opportunity to go to different areas and see teams that play different styles. I just want them to experience that and to navigate them through a few big games.

“That states intensity is just something I wanted for this group right now.”

Also in the District 1 Class 5A tournament:

Marple Newtown 36, Phoenixville 32 >> For the first time since 1995, Marple Newtown is bound for states, thanks to 10 points from Johnny Small and late steeliness at the line in a back-and-forth affair.

The seventh-seeded Tigers led 21-11 at half thanks to a 12-2 edge in the second quarter. But No. 3 Phoenixville reversed that with a 12-4 margin in the third.

Eric McKee supplied seven of his nine points in the final frame to see the Tigers into states for just the second time in program history. McKee contributed four points to a 6-0 run that put the Tigers up for good. He was 5-for-6 from the line to ice the game, and he supplied the assist to Small for his layup to put Marple Newtown up 35-32 with 34 seconds left.