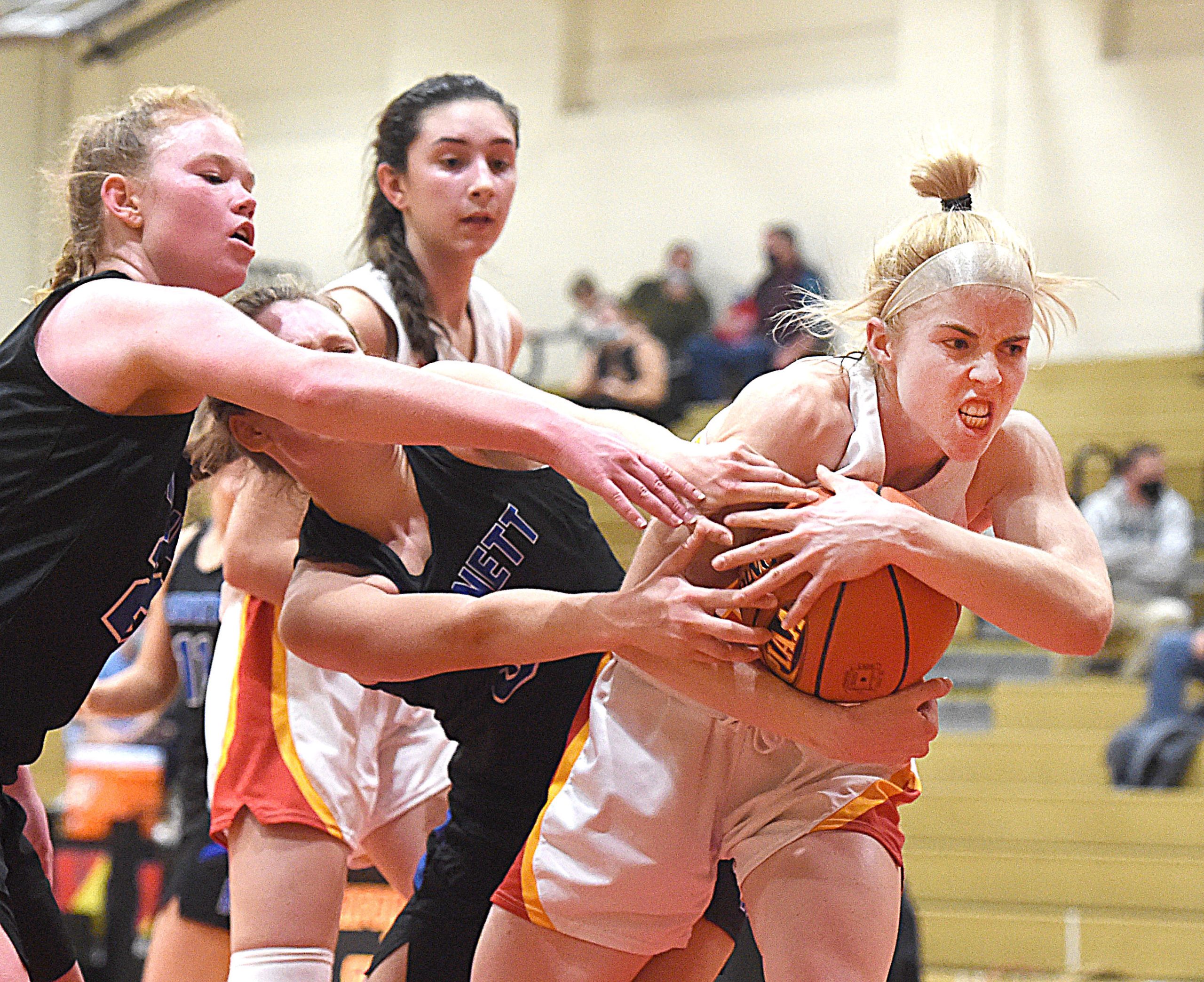 Haverford’s Caroline Dotsey (left) goes up for a basket against Kennett Friday in the District 1 6A tournament opener. (Pete Bannan/Delaware County Daily Times)

Havertown >> It would have been a tall order for No. 24 seed Kennett to defeat host Haverford Friday evening in the PIAA District 1 6A tournament opener for both teams.

Despite a slow start, the Fords used a quick 9-0 run late in the second period to earn a 36-26 win and advance to the second round of Districts, where they will face No. 8 seed Downingtown East Tuesday. “We knew we had an advantage height-wise against Kennett, and we wanted to take advantage of that,” said Haverford head coach Lauren Pellicane. “Defensively our goal was to limit Kennett’s threes, and limit them to one shot.

“We missed a lot of easy shots, I thought, but we did enough in the second half to finish a few shots and maintain our lead. We weren’t really happy with the way we handled the ball, we definitely had too many turnovers, particularly in the first half, so we definitely want to improve in that area.” In the first quarter, Kennett forced numerous Haverford turnovers, and the Fords trailed, 5-2, late in the period until Rowland’s layup tied the score at 5-5 just before the quarter ended.

Both teams missed shots through the first five minutes of the second quarter. With a little under three minutes to go before halftime, Haverford, holding a slim 7-6 lead, went on a 9-0 run in the span of 96 seconds to go ahead, 16-6. Dotsey said, “We really worked on our post stuff [on that run], tried to go high-low, tried to work off each other. I felt like we were really able to connect on that run – inside and out, and I felt like we really got back on track.”

Haverford (18-5) was coming off a 36-22 loss in the Central League Tournament semifinals to Garnet Valley. The Fords had entered that tourney seeded first.

“Garnet Valley was red-hot in that tournament, and they forced us into turnovers,” said Pellicane. “We spent the past week on our zone offense, getting better looks, on our high-low action, getting inside at the right times.” Dotsey said, “I think tonight was a step in the right direction; but we’ve really got to step it up and get ready for our next game. We definitely made some mistakes [turnovers] that we’ll clean up in the next couple of days. We definitely have room for improvement (smiles), but I think we’ll be able to clean it up.”

In the third quarter, Haverford limited Kennett to two field goals (both by junior forward Makayla Kelly) and the Fords held a 22-14 lead after three periods.

“Communication was the key for us on defense today,” said Dotsey. “We play our best defense when we talk, when we’re on our toes, ready to go, we know what’s happening. Our height is an advantage, having to force [them] down low, even our guards are tall (laughs), we have size and it definitely helps us out.” In the fourth period, Kelly hit a couple of field goals (including her second trey of the night) to cut the hosts’ lead to 26-19 with 4:23 left. Haverford maintained that lead for the next two minutes, then Carpenter scored inside to boost the Fords’ lead to 28-19.

Kennett sophomore forward Mia Matthews nailed a three from the right corner to cut Haverford’s lead to 28-22, but a Dotsey putback and free throw gave the hosts a 31-22 lead with 1:32 to play. Dotsey finished the night with 17 points.

Haverford senior guard Maddie Williams went 4-for-4 at the free throw line down the stretch to give the Fords some added cushion.

“Defensively, we were sound,” said Kennett head coach Vince Cattano. “It was just a matter of our inconsistency on offense. We didn’t shoot the ball great, but I’m proud of the effort, they competed, they battled and played really hard. That’s all we ask our kids to do – play hard and be a good teammate. We gave Haverford everything we could.

“The future for our team is looking good. We have a lot of people back next winter. They’ve just got to put the time in on their skill sets over the summer.”

Shanahan ousts Upper Merion in first round defensive tussle
Plymouth Whitemarsh rallies back, battles past Central Bucks South in District 1-6A first round