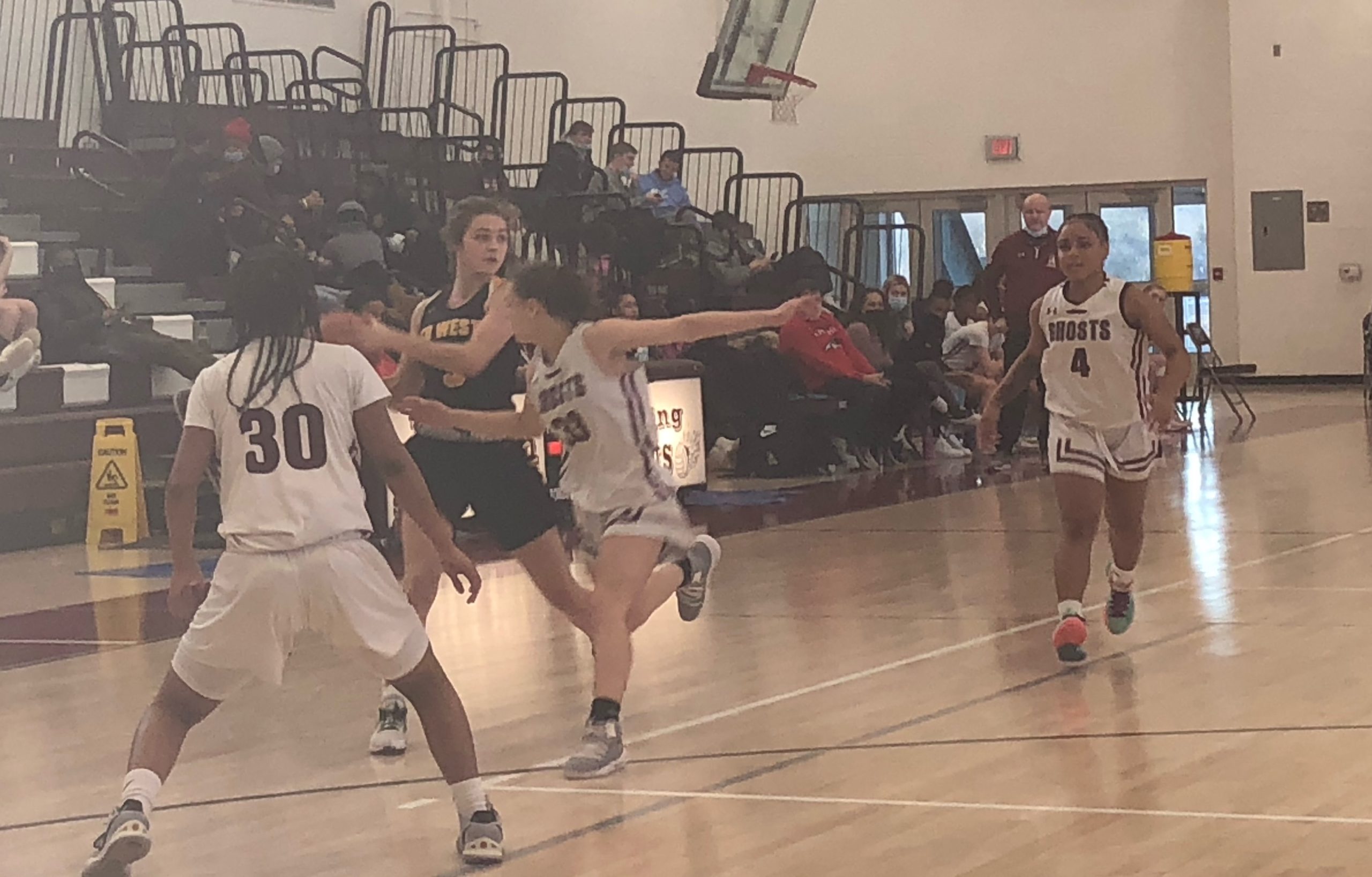 ABINGTON >> The “Mighty Mites” wear their nickname as a badge of honor.

Abington starting guards Abril Bowser, Maya Johnson and Dani Brusha, plus reserves Piper McGinley and Jordyn Reynolds, have an average height of about 5-foot-3. Overlooking them because they’re small is a really poor idea for any team lining up opposite the Ghosts, but if an opponent does do that, they’ll find out quickly enough anyway.

The tiny but tenacious Mighty Mites have been the catalyst to Abington’s pressure defense, which the Ghosts used with very effective results in Saturday afternoon’s 71-43 win over visiting CB West.

“We’re small, so it’s easier for us to be in their face and be aggressive, kind of like be a pest to them,” Bowser, a junior, said. “You have to play with what you’ve got and what we’ve got is quickness and speed. They can’t get past us. We’re the Mighty Mites.”

Abington coach Dan Marsh prefers to play a fast game anyway, but with this particular team, it’s become a necessity. With half of their rotation players just getting over the 5-foot mark, the Ghosts are built to be a half-court, slow-the-game-down type of team so they have to use what they have at their disposal.

Losing senior Khalis Whiting before the season was a big blow, but it would have been even harder to overcome if not for the immediate impact from freshmen Brusha and Johnson. Neither will tower over anybody they play against this winter, but the first-year pairing still loom large over the team’s performance on a game-to-game basis.

“Because we’re not as tall as the people we’re defending, it’s actually easier for us to get steals by pressing than it would be if we were getting posted up,” Brusha said. “It becomes easier to out-hustle them, basically.”

Bowser, a three-year varsity contributor joked the team’s conditioning is no problem because they run and run a lot at practice but it is a testament to the players that they’re as energized coming after opposing ball handlers in the waning moments of the fourth quarter as they are on the opening possession of the game. The guard, who is also an important piece offensively as a floor-spacing shooter, is having her most impactful season defensively as part of the rotation of chaos-creators.

Maura Day, a junior and standout soccer player, who has a few inches on the rest of the crew, is also part of the defensive group. She and Bowser are the only juniors in the backcourt rotation while Reynolds and McGinley are both sophomores coming off the bench without a dropoff in pace or energy.

“This is a very unique group, I don’t think I’ve ever had a group like this before,” Marsh said. “I don’t have to coach for them to play hard. Dani, Maya, Abril, Jordyn and Piper, they bring that energy and people have said it, it’s hard to prepare for what we do. It’s just what we do, even when they score, we score. We practice transition so even if you score, we’re coming right back at you.”

Marsh was eager to see how his team handled Saturday’s game against the Bucks, who came in with a strong record and having played a challenging schedule. With West coming off an overtime win on Friday, the Ghosts wanted to get after them early and certain did just that.

Abington led 5-0 and then the Mighty Mites went to work putting pressure on the ball as soon as any West player passed it back into play, getting a couple steals right under the basket for easy layups as the lead ballooned to 18-5 with 2:27 left in the opening quarter.

Johnson and Brusha cited communication as the most important factor in the defensive success this season. Even as freshmen, they had to learn quickly to be talkative on the floor so they could pick up players in transition, figure who was coming as the trapper and rotate behind, otherwise the whole thing falls apart.

“It’s not easy, but it’s what we do,” Johnson said. “It’s really heart. Other teams may want to press like we do, but they’re going to get tired. We do it because we want to do it.”

“You can’t put it on somebody, it has to be within you,” Bowser said. “I feel like we’ve all got that grit and hustle within us. It’s all within ourselves and we’re working hard.”

If it starts right under the basket and continues 93 feet up the floor, Abington’s defensive pressure extends even beyond that. While there are ways to quantify the impact in turnovers and steals, there’s a game within the game that doesn’t necessarily show up on a stat sheet.

The feeling of dread or panic in an opposing player as they try to figure where the next trap is coming from or where someone else is open as another fast, aggressive, annoying guard has converged on them inherently speeds someone up past where they’re comfortable. Marsh said there hasn’t been a game this season where he didn’t see the opposing team just turn and throw the ball out of bounds, a player seeing a ghost of a Ghost and heaving a pass to nobody.

“By the time it gets to the fourth quarter, it always seems to come back around,” Brusha said. “Seeing them get frustrated, it brings a lot of energy to the team. It’s fun, it’s a good way to play.”

Forwards Cire Worley and Jaida Helm aren’t non-factors either. Worley can jump to the top of a diamond press, her length and instincts helping to pile up deflections or if she and Helm stay back while the guards fly around trapping and pressuring, they’re still able to contest shots and pull in rebounds.

Helm was terrific against West, scoring 23 points with nine rebounds while Worley scored 15 with nine boards of her own.

Abington’s next game is a big one, taking on Plymouth Whitemarsh for the second time this season on Tuesday in PW’s gym. The Colonials took the first game but the SOL Liberty title hasn’t been decided yet. The Mighty Mites had an impact on the first game but they’re looking for an even bigger one this time around.

“Early on, I wouldn’t say we were all trying to be by ourselves, but we weren’t confident with each other to be able to help,” Bowser said. “Now that we understand each other and understand each other’s game, we can all communicate, help, trap and make the game more fun for all of us because we’re all contributing in our own way.”