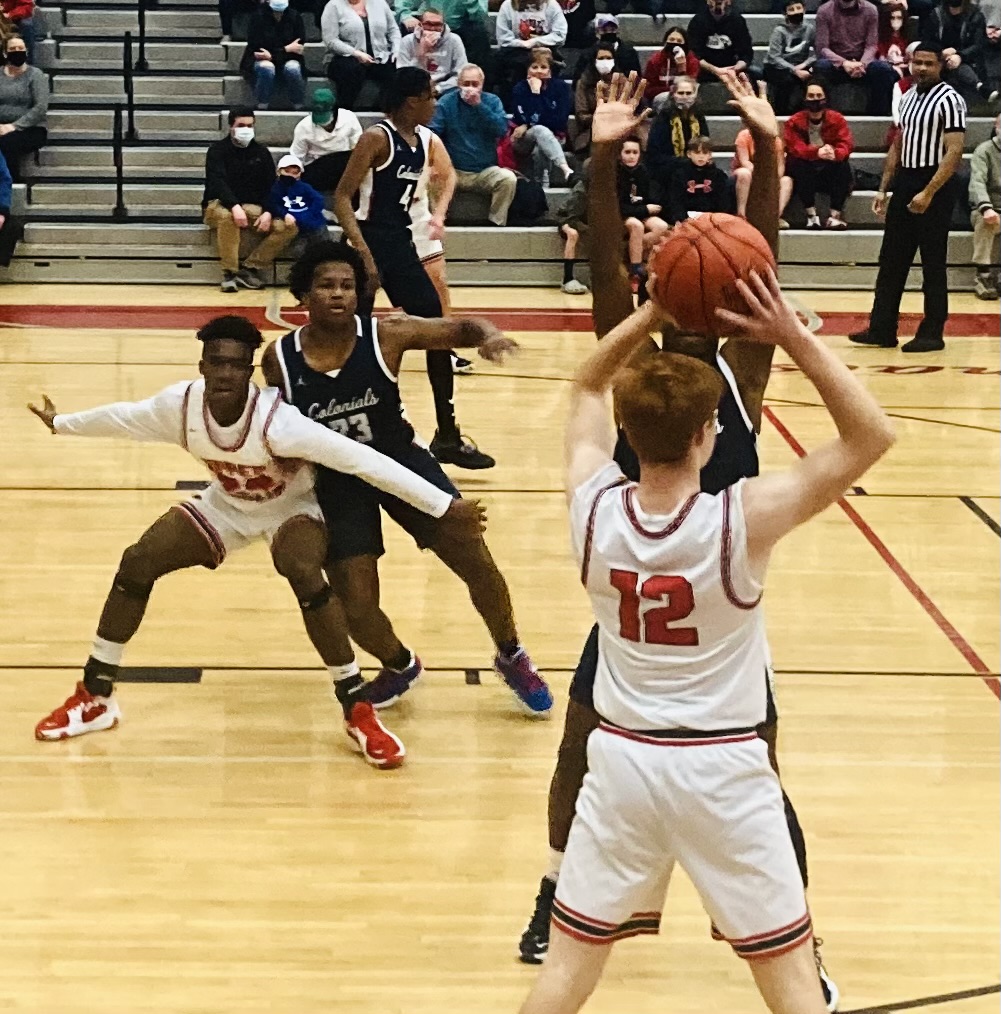 Bennett’s buzzer-beating three-pointer gave the Colonials a 47-44 victory over the Cardinals Thursday night, as PW swept the regular-season series and raised its Suburban One League Liberty Division record to 11-3. With the game deadlocked at 44 apiece, the Colonials called one last timeout with 10 seconds to play. PW ran a designed play, with the ball going to Bennett. Of all the game-winning shots he’s ever hit in all his days of playing basketball, he put this one at the top.

And for good reason.

“I was coming off a tight screen, where an Upper Dublin player was tightly guarding me, and then picked up my dribble and (got sent back), so I had to one-hand it. I saw my follow through and was like, ‘we’re winning this game,'” Bennett said. “Our whole student second ran onto the court. I got tackled but I loved the moment. We’re gonna enjoy the moment going back to our school.

“We gotta work on some execution things and we’re gonna humble ourselves getting ready for this upcoming week we have.”

That week starts with a Tuesday road game at Abington. The Cardinals (10-4 Liberty) are at Wissahickon that same evening.

Bennett finished with a game-high 20 points, including nine in the two overtimes. Marshall Baker added 10 for PW.

D.J. Cerisier led the Cards with 14 points, including four 3-pointers, and Ellis Johnson battled inside for 12.

The Colonials led by as many as nine in the third quarter and were ahead by six with two minutes to go in regulation, but would have to work (double) overtime.

“When we have a six-point lead or an eight-point lead, this year we do not know how to turn that into 15 or 20,” PW coach Jim Donofrio said. “All you can do is keeping plugging away at it.” The Colonials led 38-35 in the final seconds of the fourth, but fouled Colin O’Sullivan on a three-point shot. O’Sullivan sank all three free throws, ultimately sending the game to overtime.

Bennett scored on a runner down the lane to push PW in front, and after a three by Cerisier at the other end, Bennett tied things up by sinking one of two free throws with 1:35 left. The score would stay tied at 41, moving things to a second OT.

Bennett’s three-point play provided a 44-41 advantage for the visitors but then Cerisier answered again for the Cards with a three, making it 44 all.

It remained tied until Bennett made the big shot for PW.

“Credit to my coach, and credit to my teammates for locking up on defense,” Bennett said. Zende Hubbard sliced his way through traffic, laying it up and in for the opening points of the night.

Trey Jones hit a three moments later to give PW a 5-0 jump.

Cerisier and Griffin Pensabene started hitting shots for the Cardinals, but Jaden Colzie dished to Baker to finish off a fast break and run the Colonial lead to 11-5.

A big second quarter by Johnson brought the Cardinals closer, but a three by Bennett and a bucket by Taji Hubbard helped tilt control back to the Colonials.

PW led by as many as nine in the second quarter but Upper Dublin stayed in it, a basket in transition by Johnson tightening things to 26-22 at the break.