WC Henderson survives, Kennett does not, in down-to-the-wire district duals 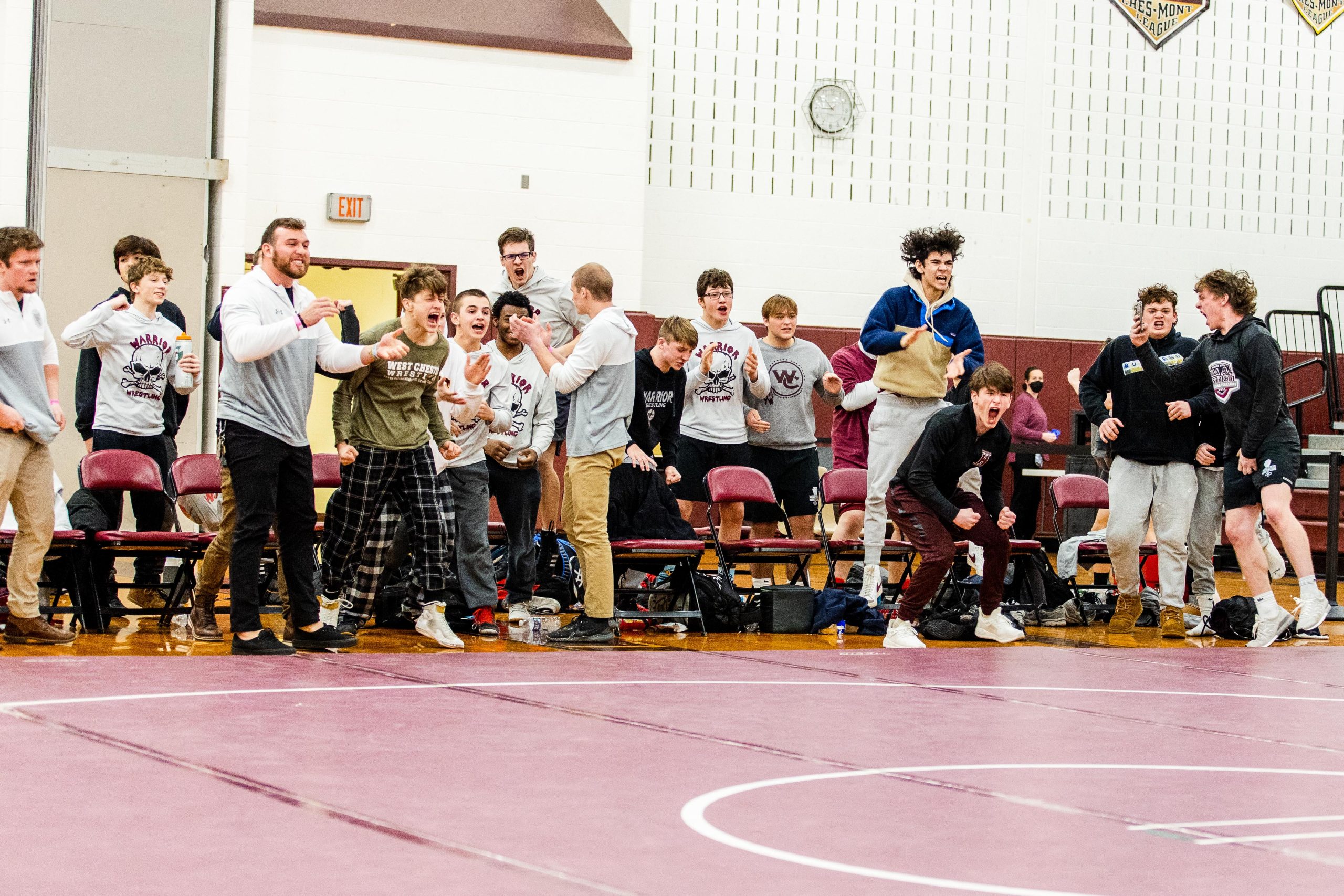 Despite being down by as much as 18 two different times to an under-seeded No. 14 Strath Haven, Beighley trusted the strength of his team would rally back.

Beighley was right, as the No. 3 Warriors won the final five bouts to stave off the resilient Panthers, 30-27, in the first round of the District 1-3A Duals, at Oxford.

Seventh-seeded Kennett wasn’t as fortunate, with its dual meet against No. 10 Pennsbury decided in the final bout, as well. The Blue Demons were eliminated, 33-30, while Henderson advances to next weekend’s quarterfinals, against No. 11 Central Bucks East.

“I was pretty confident,” Beighley said. “That’s the heart of our lineup and we knew we had our horses. There was no panic button to push, but I got a little concerned.”

The contest started at 152 pounds, where Palmer Delaney got Henderson (11-0) on the board with a 7-2 win over Kelton Brunner.

West Chester Henderson’s Max Jackman tries to get Strath Haven’s Sam Harrington to his back in a major decision win at 126 pounds. (Nate Heckenberger – For MediaNews Group)

At that moment, 18 points didn’t feel too big to overcome, for Henderson, but after Ryan Schalleur (106) worked a quick pin to cut it to 12, Strath Haven’s Ben Milligan (113) turned three into six with a fall 15 seconds prior to the final buzzer in a one-point match.

“We knew our lower weights are the strongest part of our lineup,” Henderson senior, Brett Patton said. “We’re all hammers, at that point in the lineup.”

Carmen Cortese won at 120, but gave up an escape in the final seconds to negate a major decision. Max Jackman (126) and Billy Wilson (132) had their opponents on their back multiple times, but had to settle for majors, cutting Haven’s lead to seven with two to go.

Matt English (138) followed with a 54-second pin, leaving it in the hands of Patton.

“He doesn’t lack for confidence,” Beighley said of Patton. “He’s a great closer.”

Patton dominated from the start and shut out Andrew Reilly, 13-0, to send the Warriors to the second round.

“I was telling myself, ‘just get it to me,’” Patton said. “I knew I could close it out and the guys made it possible for me.”

Henderson will face CB East, who upset No. 6 Boyertown, 31-30, in a dual that finished in a tie and was decided by criteria. That dual will take place at Upper Dublin on February 4, at 6 p.m., with a trip to the semifinals on the line. The top four teams qualify for the PIAA Duals.

“This was really good for us, to have it go down to the wire,” Beighley said. “We needed to see that. Our goal is state duals and we’re going to be in a lot of matches like this that are nip and tuck, where we need to keep our composure and find a way to come out on top. Strath Haven is a gritty team and we knew it was going to be tough, and we haven’t been tested this year, so this was good.”

Even still, the Blue Demons got off to about as good a start as they could’ve asked for, with pins by Tyler Maiers (152) and Josh Kochersperger (160), and a major from Josh Barlow (172). Those three bumped up a weight, as did Darrale Barrett (189), who found himself in a 4-0 hole against Cade Gabbett, thanks to an early headlock. Barrett scored a reversal and rode Gabbett out in the second period, but couldn’t escape in the third and dropped the swing match, 5-2.

“We jostled our lineup from 152 to 189, and they were wrestling bigger kids,” Kennett coach Kevin Reigel said. “We asked them to do that for the team, and they stepped up pretty big.”

Barrett, however, was given a flagrant misconduct for his reaction after the loss, and Kennett was penalized three team points.

“This elevates expectations,” said Reigel, who will return almost every starter next season.