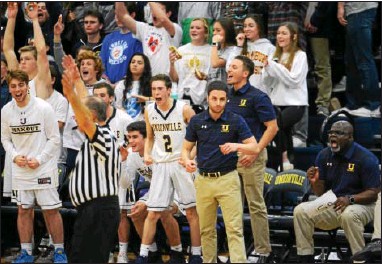 LONDON GROVE >> There is a reason you will never hear a coach badmouth teamwork, and on Tuesday the Unionville boys’ basketball team showed how a collective five-player effort can easily overcome a standout individual performance from the opposition.

Four players scored between 18 and 13 points to power the Longhorns to a shockingly complete 64-44 Ches-Mont road win against Avon Grove and its dynamic scorer Tyler Arnold. Undermanned Unionville is down two injured starters right now, but still improves to 5-8 overall.

“We executed on offense, played aggressive and trusted our teammates,” said ’Horns head coach Chris Cowles. “We worked for open shots and then the guys obviously hit them.

“It’s just guys staying in the moment and doing their jobs. We talk about that a lot, and this was probably the first time they’ve done that all season.”

A senior forward, Arnold took the ball to the basket relentlessly and wound up pouring in a game-high 30 points for the Red Devils (5-8 overall), but the rest of his teammates combined for just 14 points. The juxtaposition was obvious.

“It stinks that Tyler had a great game like that and we lose,” said Avon Grove head coach Ikeem Mays. “He’s a guy we depend on, and tonight was another example of that.

“It is great that (Arnold) is having performances like this, but we need to come together as a team to get him some help and get a win. He is working his behind off and we are just missing opportunities.”

With Arnold doing most of the damage, the Devils actually had an edge in buckets (20-19), but the Longhorns more than made up for it in two ways: by outscoring Avon Grove 16-3 at the free throw line, and burying 10 3-pointers and surrendering just one. In fact, Unionville had more buckets from long range than the traditional two-point variety.

“I thought we got into the paint a lot, and that allows us to get some open 3’s or fouls and free throws,” said sophomore Ryan Brown, who scored 10 of his 16 points in the fourth quarter.

“Today we executed very well. If we start to do that in every game, I think we can win a lot of them.”

Trailing most of the way, the Devils opened the second half with a 10-0 surge and quickly sliced the Longhorns’ lead to 34-30. But Unionville responded with a trio of big 3-pointers from Robbie Logan, Jake Kammeier and Jack Casten. And then early in the final period, Brown highlighted a 17-1 closeout run with a 3-point play, a free throw, and then another after a technical foul was whistled on Avon Grove.

“It would be safe to assume this would be one of our better games,” Cowles said.

The Longhorns knocked down seven first half 3-pointers against the Devils’ zone, including two late from Logan and Charlie Kammeier that capped a 15-2 run to end the half to put Unionville in charge 32-20.

“As a team, we are good at getting (opponents) out of zones because we run a good offense, we find open guys and hit shots,” said Charles Kammeier, who led the way with 18 points.

“We knew (Unionville) shoots a lot of 3’s and we expected it,” Mays added. “That’s why we came out of (the zone) pretty early. They just made a ton of shots.”

To complicate matters, Avon Grove’s top two players – Arnold and Tyler Newman – missed significant portions of the first half with foul trouble. For the game, the Devils were able to connect on just 3-11 from the line, and it came just five days after going 3-13 against Coatesville.

“We work on it every day. It’s extremely frustrating,” Mays acknowledged. “We just have to be more focused. We can beat a dead drum over and over again, but the bottom line is we have to make them when they count.”

Logan and Casten chipped in 14 and 13 points, respectively, for the Longhorns. Top player Kevin Nowoswiat has been out of the lineup for a week after breaking a bone in his right hand. And another starter, guard James Anderson, is out following a concussion.

“It’s been a struggle from a health standpoint,” Cowles said. “We should be getting James back soon, but we hope Kevin hasn’t played his last game for us.”