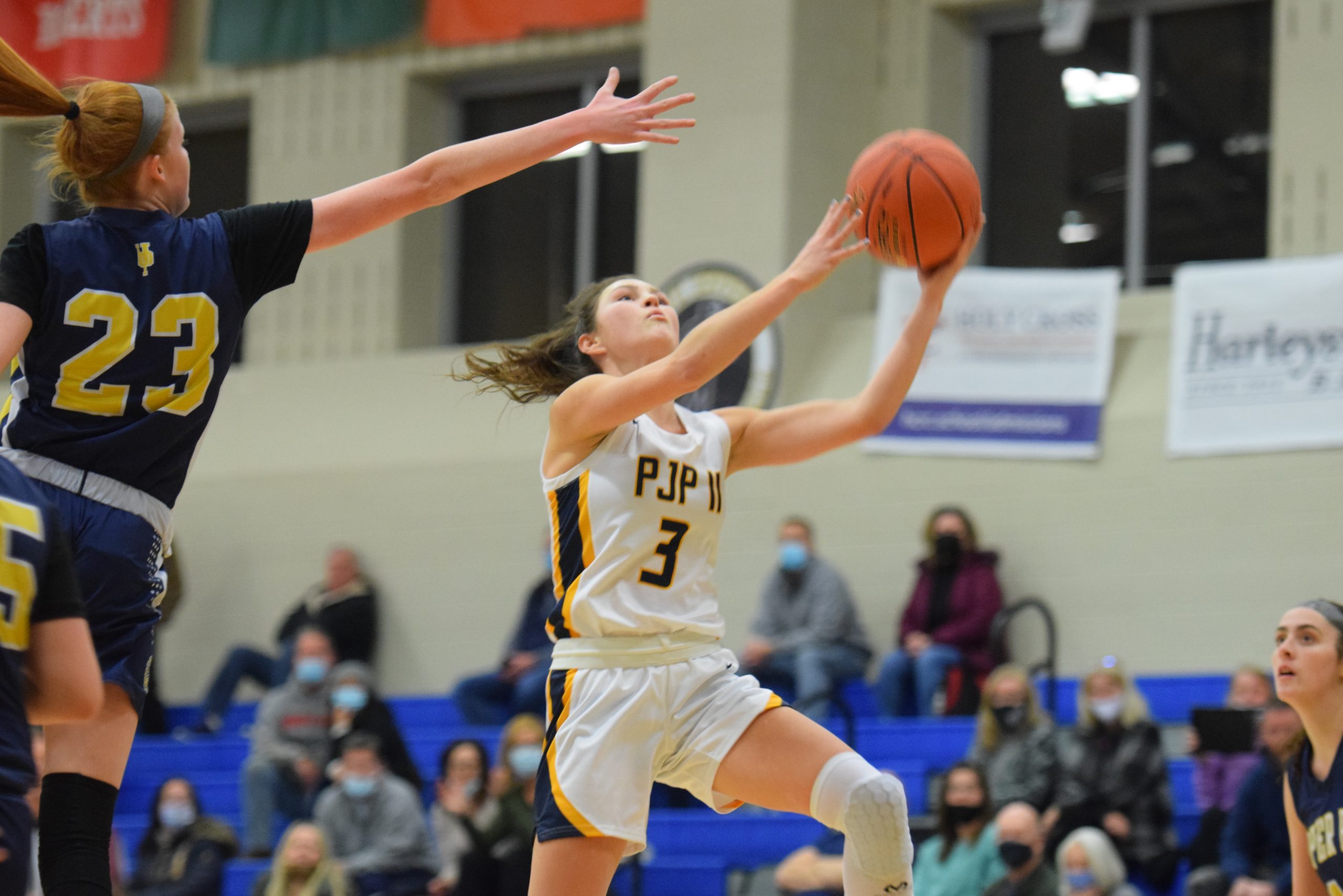 ROYERSFORD >> Jack Flanagan will joke about being the loudest person in the gym.

Sometimes he had to be when coaching the Pope John Paul II and Pottsgrove boys teams the last decade, yelling instructions to his players in raucous gyms.

His tone hasn’t changed in his homecoming season to Pope John Paul II as head coach of the girls’ teams even in arenas that aren’t typically quite as loud.

Fittingly though, his Golden Panthers play loud. It’s not so much in their words, but in tempo and intensity to loose balls and rebounds, the ferocity they go to the ball. It’s not a symphony. It’s rock and roll, which rang out Tuesday night.

Kennedy scored 18 points and Crossan added 17 as PJP improved to 5-0 in the division (6-1 PAC, 6-5 overall). The confidence of the Panthers’ dynamic duo was on display with their willingness to get to the basket and draw contact. Kennedy was 6-for-9 and Crossan 5-for-7 at the free throw line.

Upper Perk was largely limited by PJP’s hounding defense except for impressive freshman Grace Galbavy who scored a game-high 21 points and had six blocks.

PJP turned it on in the third quarter after leading only 20-15 at halftime. They surged ahead to lead by 15 at 31-16 after a Bella Tammaro layup.

The Tribe managed to get within 33-26 early in the fourth quarter after a Galbavy jumper, but it was all PJP down the stretch as it allowed UP only six fourth quarter points.

The Golden Panthers looked poised to top the Frontier in the preseason but Kennedy missed the early part of the year after a bout of mononucleosis and they appeared more beatable. Kennedy has returned and picked up where she left off last year as an All-Area second team junior. Crossan has upped her scoring and the pair forms the top scoring tandem in the league.

PJP got past Upper Perk 49-40 on Dec. 21 and were even more confident Tuesday.

“We took care of Upper Perk the first time without Amelia but that was a super close game, so we were really excited to have her back,” Crossan said. “They have that tall No. 23 (Galbavy) who is a really strong player. It was really tough to drive on her. We picked it up in the second half and really worked together.”

As significant contributors and/or starters for four years, Crossan and Kennedy seem to be wearing their ‘senior leaders’ roles well.

“We’re best friends on and off the court so we always want to show to our teammates that if we work together we can get things done,” Kennedy said.

“I feel like we owe it to ourselves to be confident. We’ve been playing (varsity) together four years, we have that chemistry on and off and we’re just ready,” Crossan said. “It’s senior year and we want to end strong, keep working hard and have a good season.”

It was a second defeat to PJP for Upper Perkiomen (2-2 Frontier, 6-5 overall), but just being in a game that had any division title implications is a huge step forward for a program that has been at the bottom of the standings in recent years.

“The goal was to win the division, but think about it, last year we were 2-18, the year before we were 0-22, so the fact that we’re in it is reason to keep our heads up high,” said Upper Perk coach Matt Bowe. “To play this team with two amazing senior guards, even though it was a loss (Upper Perk) played well and we hope to carry the momentum. We still have nine games to go and if we play like this I think we can beat any other team on our schedule.”