Cole Hargrove does it all in Methacton’s win over Norristown 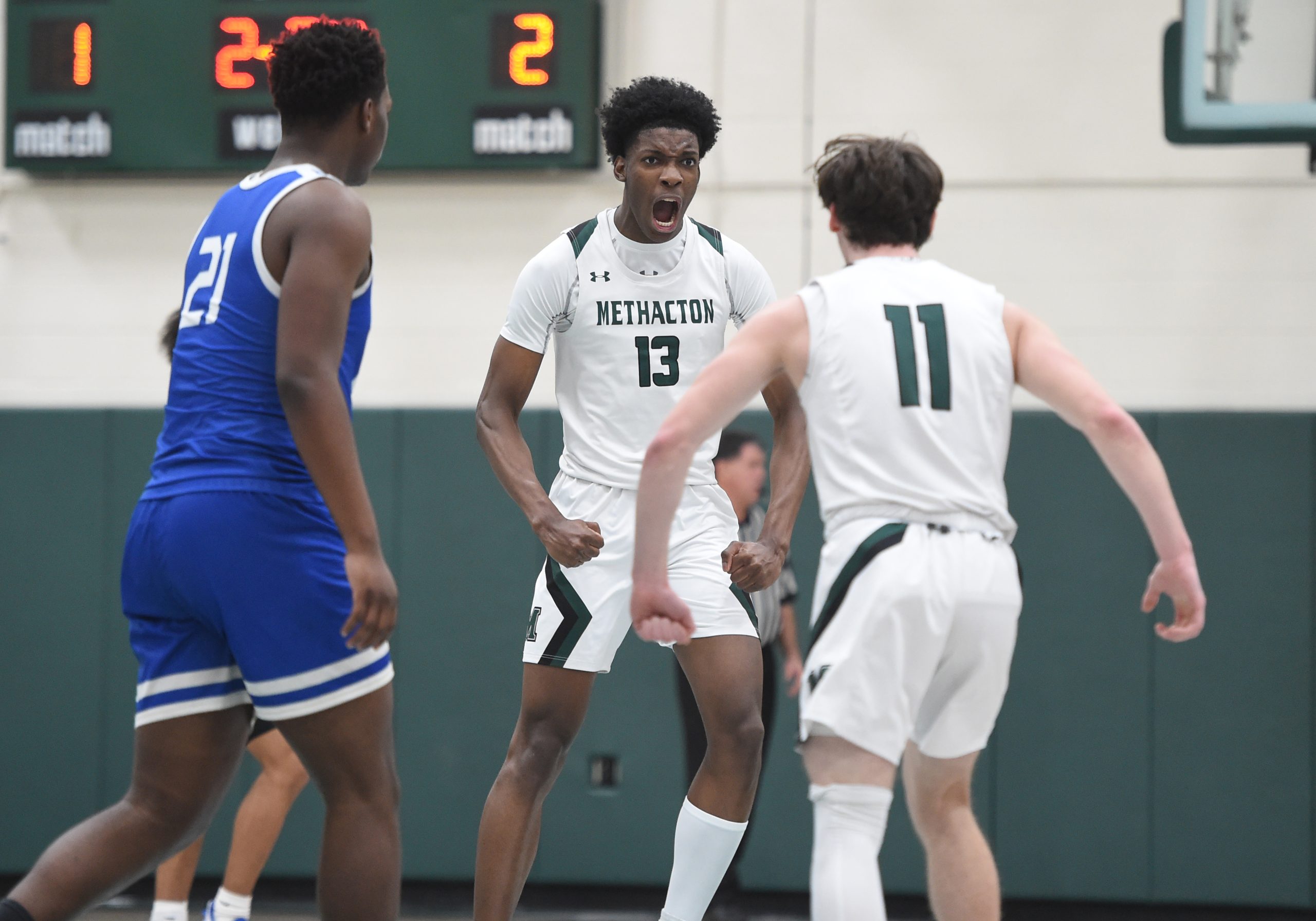 WORCESTER >> Cole Hargrove wasn’t happy with how he played in Methacton’s 25-point win over Norristown 10 days ago. The senior faced some foul trouble in that game and finished third on the team in scoring with 12 points.

In the rematch at Methacton High School Tuesday night, Hargrove had 12 points in the second quarter alone. The 6-foot-8 forward finished with a game-high 26 points, 10 rebounds and six blocks in the Warriors 73-61 Pioneer Athletic Conference Liberty Division win.

“I was passive in the offense,” he said of the first meeting. “In this game I had to be more assertive offensively and on the defensive end.

“Norristown is always an intense game. I feed off the energy from our crowd, especially at home it’s a very nice environment to play in. I just feel it and the game comes to me.”

Early in the second quarter, Hargrove put the exclamation point on a 19-2 Methacton run. He made back-to-back blocks on the defensive end and hustled down the floor, finishing the fast break with a two-hand slam. The Warriors run gave them a 26-11 lead.

“After I get the first block I’m trying to secure the rebound,” Hargrove said. “I missed it so I’m trying to contest every shot. Once we get the rebound I’m running the floor and looking for dunks to get the crowd hyped.”

“Defensively, offensively, (Hargrove’s) such a game-changer out there,” Methacton coach Pat Lockard said. “The way he protects the rim for us, the way he rebounds the basketball for us. Then on offense he’s always the pressure-release valve for us. If we ever get in trouble, we’ll throw it up to the 6-8 guy and take our chances on that. He’s really smart with the basketball, too. He’s able to make those passes on the backdoors, he’s able to drive to the basket and finish around the rim, whether it’s dunks or layups. He’s just so versatile and it’s great to have that weapon on my side.”

Junior Matt Christian also played a big role in the Warriors win. He finished with 16 points – eight in the first quarter and eight in the third. He helped start Methacton’s 19-2 run, which turned a 9-7 deficit into a 26-11 lead. He had two threes in the opening quarter while senior Brett Byrne, who finished with 17 points, also hit an early outside shot.

“Our gameplan is to play inside-out with me,” Hargrove said. “If I get it in the post I look to kick out or score. If I kick out, 90% of the time it’s an open three.”

Christian’s eight third-quarter points helped Methacton extend its lead to 52-37 with eight minutes to go. He made a three-pointer, a short jumper and an old-fashion three-point-play during the third.

“(Christian) needs to shoot the ball for our offense,” Lockard said. “Sometimes he’s such a nice person he can be a little bit too unselfish it can hurt our team. I think he missed his first or second three. After that I told him you still need to shoot the basketball. That’s what we need on offense. He does a great job taking those open shots and we have full confidence he’s going to knock it down. Whether he’s 0-for-3 or 0-for-5 we don’t care, if he’s in rhythm we want him to shoot the basketball.”

Norristown (9-5, 4-3 PAC, 2-3 PAC Liberty) made a run midway through the final quarter, trimming a lead that hovered around 20 to 12 with under four minutes to go, but lost its momentum when the game got out of hand.

Eagles senior DJ Johnson was driving to the basket to make it a 12-point game when he was fouled by Methacton’s Matthew Blakemore. Johnson went down hard and remained on the floor while Blakemore was given a personal foul. Norristown coach Binky Johnson argued with the officials that it should have been more than a personal and received a technical, his second of the game, and was ejected. After more disorder on the floor, the play was called an intentional foul.

“The reason I got ejected was because I said that’s not a personal foul,” Binky Johnson, who added that this sequence doesn’t take away from how well Methacton played, said. “That has to be an intentional foul. It has to be. It can’t be a personal foul. The guy was defenseless, landed on his head from a guy running down the court. (The official said) go sit down. Go sit down? I’m talking to you, my guy is injured. (The official) wouldn’t have a conversation.

“That was the reason for my anger. The first job is to protect the kids. First and foremost we protect the kids. Whether it’s their team or our team, our job is to make sure the kids are protected. When you are in the midst of competition, a lot of emotions surface, especially when you’re in a rivalry game. The officials, that was some of the worst I’ve ever been a part of in all my years of coaching, some of the worst I’ve been a part of.”

Zaki Gomez made both free throws to get Norristown within 12, 61-49, with 3:38 to go. Hargrove responded by hitting both technical free throws for Methacton and extended the lead back to 14. Shortly after, Norristown’s Rayshawn Stinson was called for an intentional foul and ejected.

Methacton went 15-for-20 from the free-throw line in the fourth quarter to put the game away, 73-61.

Gomez hit five three-pointers in the game and led Norristown with 17 points. Righteous Mitchell added 16 points and DJ Johnson, who didn’t return after the intentional foul, had 11.