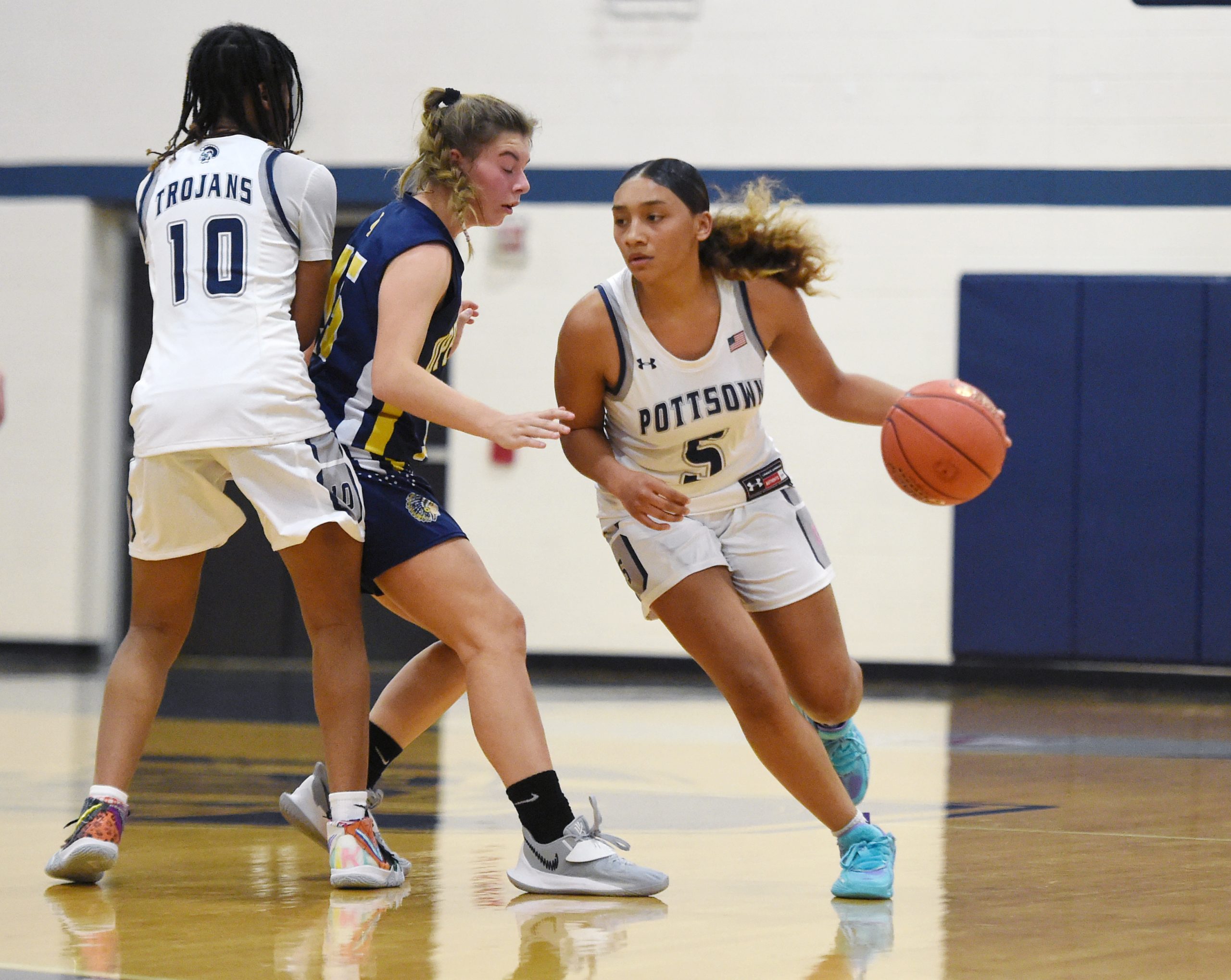 Pottstown senior Trinell Watson made her ambitions very clear when she arrived at the high school four seasons ago.

She told then first-year head coach Madison Morton she wanted her name up there alongside the program’s other top players as a member of the 1,000-point club.

“That was just always a goal because I know so many basketball players who couldn’t reach that amount,” Watson said. “That’s an amount everybody wants to hit, but I know only a few can do it, and I’m one of those few who did.”

Despite the lofty number, the Trojans were ready to celebrate their seniors special accomplishment. They had a banner prepared and flowers to give her. With Watson averaging nearly 24 points per game, they couldn’t take any chances.

It took an extra period, but Watson got the job done. A free throw in overtime — part of a 31-point effort in the 66-65 loss — fulfilled a dream four years in the making as she became the 12th Trojans player to reach 1,000 career points.

They paused the game and gave Watson her banner and flowers before taking pictures to capture the milestone moment.

“It was amazing,” Watson said. “I’ve been wanting it since ninth grade. I always knew I had the potential to do it. It just took a lot of sweat, hard work, fighting, tears. It took everything just to reach this goal.”

Watson arrived at Pottstown right after the Trojans’ previous 1,000-point scorer — 2018 grad Ebony Reddick — departed. She knew the rarity of the achievement, but also possessed the ability and confidence to believe she was one the rare ones.

She averaged 7.7 points per game as a freshman to earn second team All-PAC Frontier honors, but Morton knew she was just scratching the surface.

“We knew right off the bat she had talent as a basketball player,” Morton said. “She could dribble with both hands, she had a really nice shot, and she would finish at the basket. The one thing at that time, which isn’t that odd for a freshman was her maturity.

“She would hang her head, she would mope as a freshman, so those are the things we talked about. Not so much scoring, not so much about you need to do this, this or this to score. A lot of it was about spacing on the floor, putting yourself in a position to get the ball, and when you get the ball knowing what you’re doing with it.”

Watson followed a promising freshman season with a breakout sophomore campaign. She averaged 16.4 points per game, which ranked third in the PAC, and earned first team all-conference and second-team all-area honors.

She continued as one of the league’s top scorers in her junior campaign, ranking sixth in the conference as she averaged 14.5 points per game (218 points in 15 games) for another first team All-PAC Frontier selection.

“Just stay focused. After basketball season, I stayed in the gym,” said Watson, who played AAU for Eastern PA Elite and Phoenixville Villains in the offseasons. “I stayed on other basketball teams. I stayed gaining my game. I never stopped working to get any better.”

“As soon as I came and showed what I could do on the court, everybody supported me ever since. I met so many coaches that wanted to help me make my game better, and they really did. I appreciate all of them.”

Watson came into her senior season needing 260 points to reach 1,000. She took just 11 games to get there.

“Each year, she worked hard,” Morton said.  “Her sophomore year she had a really good explosive year and scored a lot, and then the COVID year hit. She got a little concerned. We talked about it. She made the most out of those (15) games and did enough to put herself in a position this year with a full season to do what she did tonight.”

Things have not always been rosy through Watson’s career with the program. Pottstown has just 10 total wins in four seasons. Thursday’s loss dropped the Trojans to 2-9 this year.

Injuries and now the COVID-19 virus over the past two seasons have often left Pottstown with low numbers and put a lot on Watson’s shoulders.

She hasn’t let those results impact her approach to the game.

“I always knew that I was a leader, so I knew once my head goes down everybody’s head goes down,” Watson said .”I always told myself, ‘You’ve gotta be the one to push everybody else. I know that might be a little hard here or there, but you got this. You can make everybody else better so do that.’”

Maturity is a trait Morton has seen grow over her years after some moments of frustration early in her career. Even as she chased the coveted milestone late in Saturday’s game, Watson continued to make the ‘right basketball play,’ instead of forcing things for herself.

“Realistically she is our star player, but she never let the other girls fall into that role where, ‘We’re just here for her,’” Morton said. “She talked to them. She put them in the right position. She talked to them defensively. She encourages them. She really matured as a senior, as a captain, as a leader on the floor. It’s a testament to her and part of the reason she was able to do that tonight.”

The Trojans have yet to reach the postseason in Watson’s career. They had hopes of putting together a team with a chance in 2021-22 before fellow senior Calista Daye went down to injury days before the start of the season.

Morton noted Watson really embraced her captain role when Daye went down. Watson said she’s challenged herself to grow on the defensive end in Daye’s absence.

But if she continues her torrid scoring pace, Watson has a chance to climb as high as fifth or sixth on the Trojans’ career scoring list with at least 10 games left on the team’s schedule. Her 31-point effort on Saturday gave her 1,002 career points.

“It’s been a pleasure and I think one of the things that the coaches have enjoyed the most is like any kid she has her ups and downs, but the past two seasons she has matured so much as just a person and a basketball player,” Morton said. “That was a huge addition to why she was able to achieve what she was able to achieve.

Watson hopes she can help the Trojans tally a few more victories as she wraps up a terrific career. The next step will be playing somewhere at the next level.

Watson and Morton both noted the accomplishment is about more than just her.