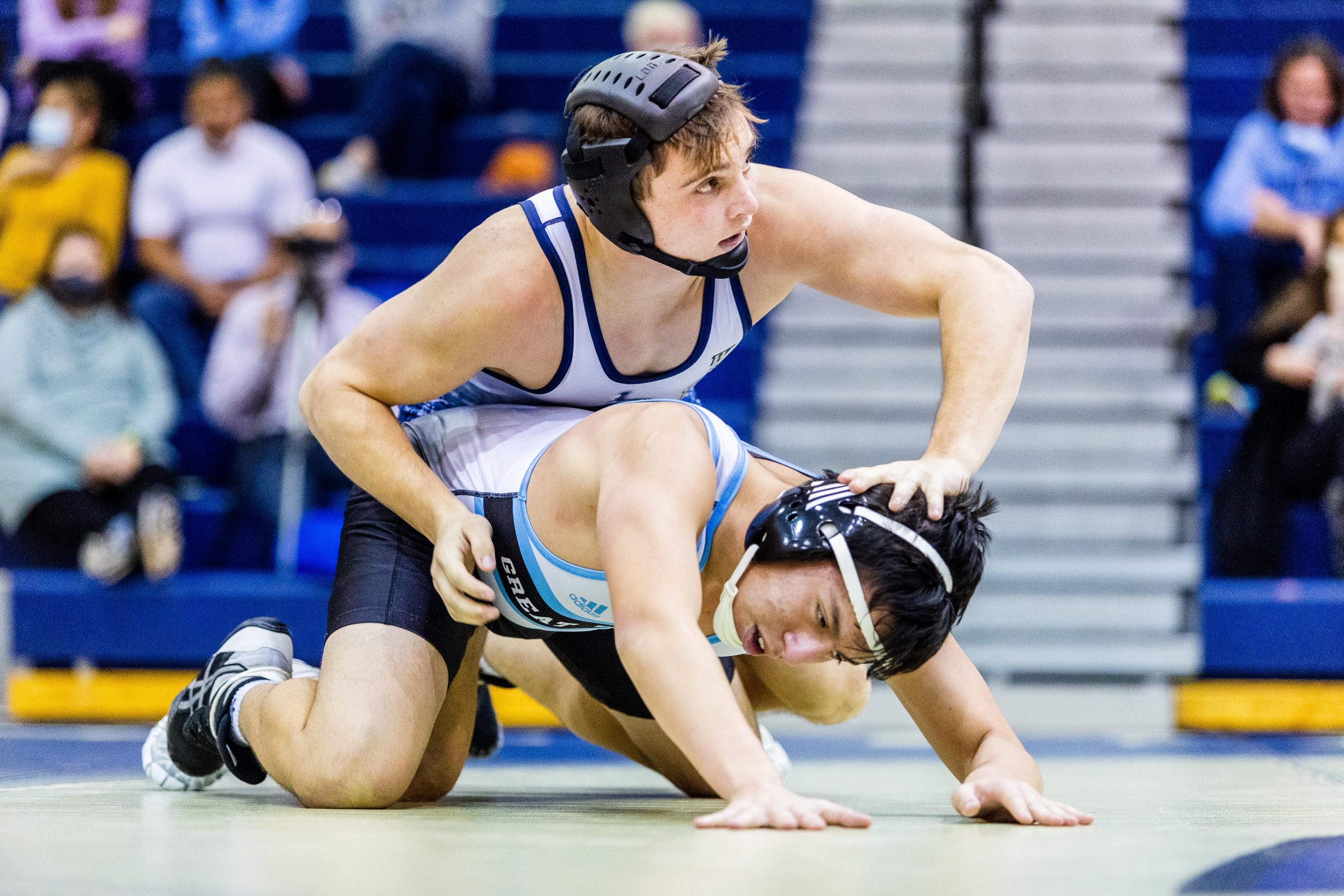 WESTTOWN >> West Chester Rustin has had, like many other teams, a rough couple weeks, dealing with injuries and COVID-19 absences.

Fortunately for the Golden Knights, they have an athlete leading the way that knows a thing or two about bouncing back.

After a promising youth career, Marek Seaman decided not to wrestle as a freshman, but came back out last winter and earned his way to a state tournament qualification. His junior season started in the recovery phase from an injury, but Wednesday, Seaman made his season debut and those taxing weeks for Rustin all of a sudden felt long gone.

Seaman was in the middle of a six-win streak for Rustin that propelled the Golden Knights over visiting Great Valley, 42-17.

“It feels great to be back with the team and I was excited to go battle with them,” Seaman said. “It’s been a tough couple, three weeks, with COVID and injuries, but having everyone back this week was a good feeling and we’re all ready to get after it.”

Great Valley (0-1 American Division, 2-6 overall) had its own health issues to overcome, but showed up and competed. The Patriots won three of the first four bouts, getting bonus points from Tim Matthews (132 pounds) and Nick Mort (152), and a come-from-behind decision from Luke Sita (145).

“We’re not happy with the loss, but it’s a step in the right direction,” Great Valley coach Bobby Lavelle said.

Great Valley’s Luke Sita strains to get West Chester Rustin’s Gavin Seaman to his back in a 6-4 win at 145 pounds. (Nate Heckenberger – For MediaNews Group)

Across the mat from Lavelle was Aston White, who directed his first dual meet as head coach in a battle of the two youngest coaches in the Ches-Mont. White had been an assistant for Rustin since 2017, and wrestled for Owen J. Roberts from 2009-2013.

“We tell the kids it’s not about the results for these matches, but what’s important is effort and attitude,” White said. “I think we’ve had some adversity, like a lot of teams. We need more effort from some individuals than what we got. When it gets tough, we have to dig deeper and not succumb to that, but Great Valley came out and battled and frankly battled more in tougher situations.”

“Last year was crazy,” Seaman said. “I wasn’t expecting much when I came back. I was doing it to get in shape for lacrosse, and when the season started I started to fall in love with it again. I definitely went further than I expected.”

Sandwiched between those two results was an impressive 10-1 major by Great Valley’s Michael Cruz over James Pizzi, who saw his first action since mid-December.

“There’s a lot more buying in,” Lavelle said. “Someone like Cruz, who struggled early on, is starting to see more success and he’s starting to buy in. Same with some of our middle weights. It’s easier to teach more advanced stuff and build a little culture when the guys are moving in the right direction.”