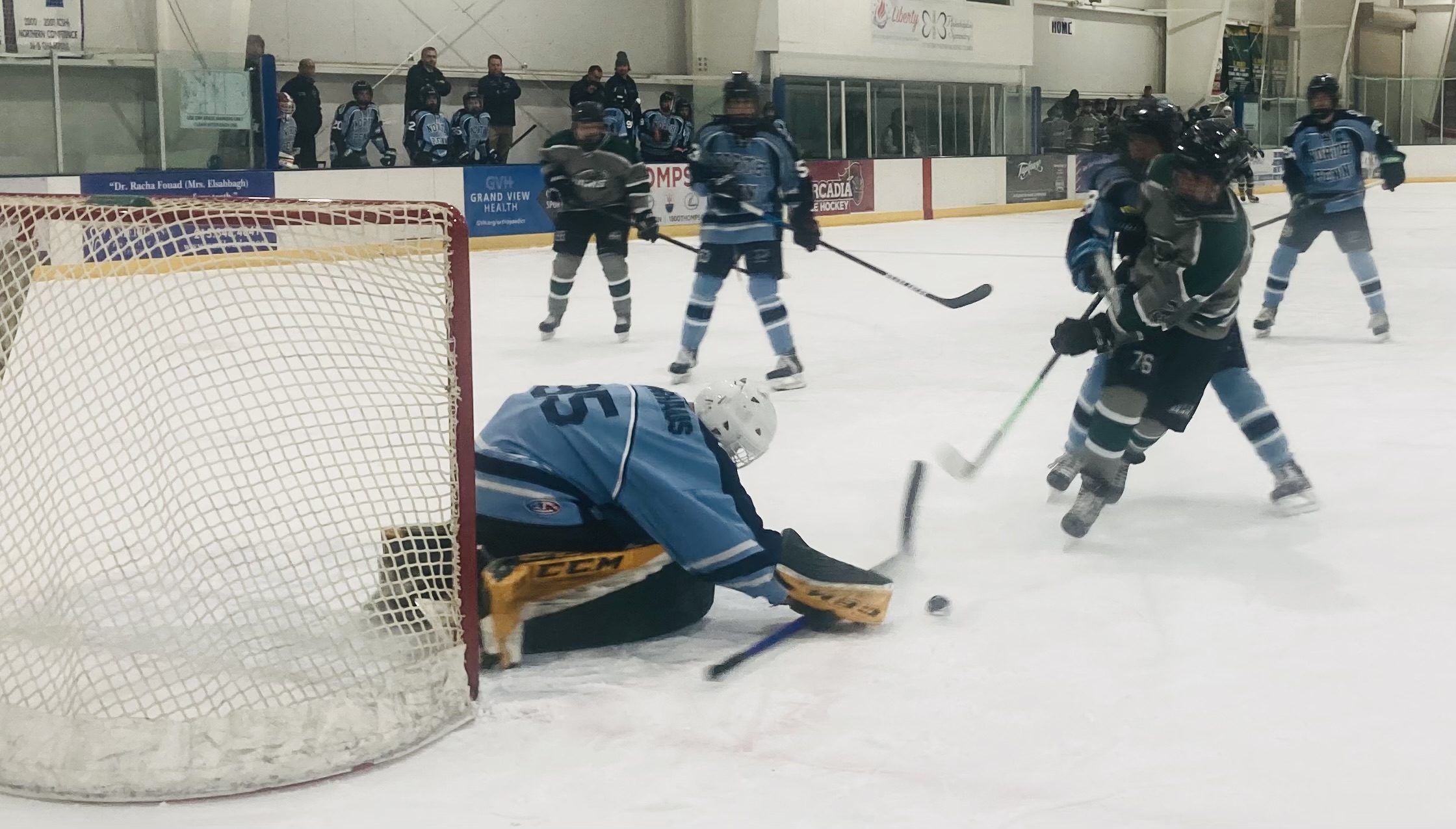 HATFIELD TWP. >> Pennridge pressure never diminished on Wednesday night, to the tune of 77 shots on goal.

And the Rams are as deep as they are explosive.

“They have four lines that they can roll out. They’re the most talented team in the league that I’ve seen so far this year,” North Penn coach Kevin Vaitis said. “They did a great job of moving the puck.”

The Rams jumped out to a 3-0 lead in the first period and went on to a 6-3 victory over the rival Knights in a Suburban High School Hockey League Continental Conference game at Hatfield Ice.

The win raised Pennridge’s unbeaten record to 7-0 overall and 4-0 in the conference. The Rams are off until Jan. 6, when they face Pennsbury at Hatfield Ice at 7:10 p.m.

North Penn is now 1-6 overall and 0-3 in the conference. The Knights are off until Jan. 5, when they travel to Grundy to take on Council Rock North at 7:20 p.m.

Back-to-back goals by Andrew David opened the scoring for the Rams, both times assisted by Jack Lowery. After the game remained scoreless for almost nine minutes, David struck twice in a short span.

“We needed something there. We were struggling a little bit. We just kept attacking and didn’t let up,” David said. “We found some opportunities. We definitely could have had more. With 77 shots, we’ll take our forecheck and aggressive play any day.”

Andrew Savona scored in the final minute of the first to boost the lead to 3-0.

“I think we were kind of shell-shocked a little bit there in the first period,” Vaitis said. “But then we kind of settled down. In the last two periods, it was 3-3, so that’s something we gotta build on.”

The Knights got on the board with about five minutes left in the second on a goal by Tony Tuozzo (Chris Seward assist). Savona set up Kevin Pico at the other end to make it 4-1 after two.

“We have four solid lines. I wouldn’t say we have one weakness,” David said. “Teams try to match lines with us but they just can’t because we have four of them.”

Savona notched his second goal early in the third to extend the margin to 5-1. Colin Dachowski assisted.

The Knights sandwiched a pair of goals (Alex Cravener and Jack Bates) around a tally by the Rams’ Aeryk Lehrhaupt to close out the scoring.

Pennridge would like to maintain its momentum despite a long layoff.

“It’s good to go into the break 4-0 and then come back against Pennsbury,” David said. “That’s our game of the year. We’re looking forward to it.”

North Penn got some things to click as the game went on.

“In the third period, we mixed a couple things up and we started generating a little bit more pressure on them,” Vaitis said. “So that’s what we gotta take and kind of build on.”