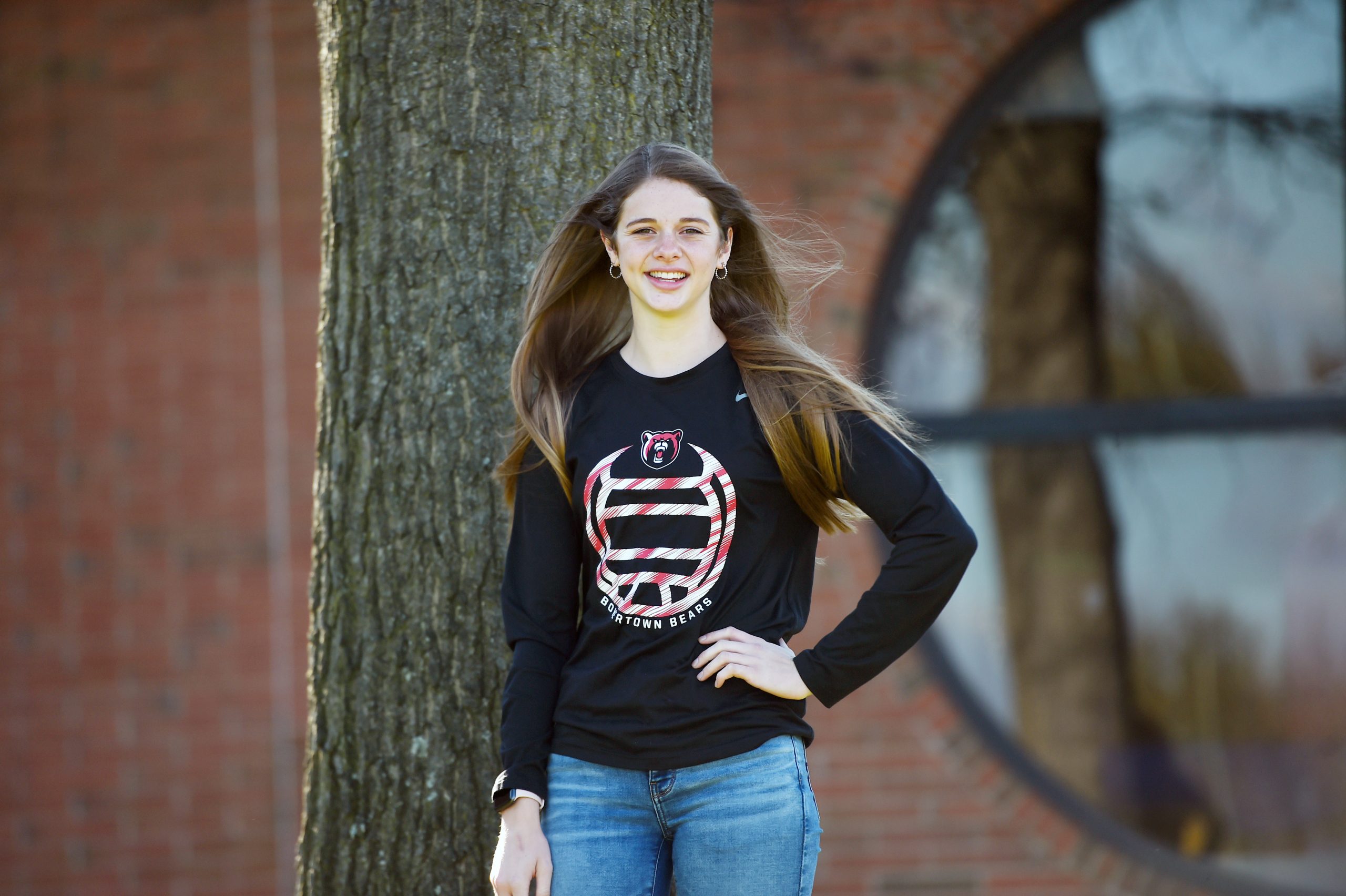 A summer after her older sister Savannah gave it rave reviews, Adrianna Derstine decided to give the Boyertown Girls Volleyball Camp a try.

Little did Derstine or Bears head coach Mike Ludwig — then in the infant stages of building his Boyertown program — know the result of Derstine’s curiosity.

“I kind of had the experience with jumping, and I also did track and high jump,” Derstine said. “I had some experience with my other sports, but then just coming in, everything coach was saying started to make sense to me. I just really appreciated the support and the girls around it and how much of a team sport it is. It just kind of fell into place.”

Derstine was a pretty talented basketball player before deciding to give volleyball a try. Her experience was limited to some recreational games with her youth group before attending the Bears’ camp.

Ludwig said he and his coaches could see the potential right away.

“She kind of stood out,” Ludwig said. “She was obviously very athletic but had never played volleyball before, but you could see the naturalness about her.

“She just has a naturalness when she gets in the air that most girls just don’t have. She just kind of hangs there. And that’s always been a part of her game. When you see a kid who does that, they stand out. That was the thing we saw that we’re like, ‘Oh my gosh, this kid can hit, block and defend really, really well for us at the net.’ And then she fell in love with the game and the rest is history.”

Derstine started out on junior varsity as a swing player when she was a freshman and was in the starting varsity lineup by the end of her debut campaign at Boyertown.

Following a conversation with Ludwig after the season about her potential to play at the next level, she began to play in showcase events and took a jump up in competition at the club level.

By her third season playing volleyball competitively as a sophomore in 2019, she was a second team All-PAC Liberty and second team Mercury All-Area selection.

Boyertown’s Adrianna Derstine, center, and her teammates celebrate a point in the first set of the Bears win over Sun Valley during Thursday’s District 1-4A playoff game. (Owen McCue – MediaNews Group)

She earned first team all-league and all-area honors as a junior and senior, helping the Bears to consecutive league championships.

Derstine felt like she arrived late to the game starting her volleyball career, but knows she’s made major strides in a short time.

“Being able to see how far I’ve come, even my vertical and my approach has changed so much,” she said.

Already established as one of the top players in the league entering this season, Derstine had big shoes to fill in 2021.

Gone were 2020 Mercury All-Area Player of the Year Emma Ludwig and a handful of other leaders from last year’s first-ever Boyertown PAC championship squad.

The Bears needed someone else to guide them as they tried to defend their title, and Derstine was up for the challenge.

“Emma was a great example of stability through everything,” Derstine said. “Her energy, her leadership and her emotional standpoint, it was all a great example for me. Coming into this year, I kind of knew that she wasn’t going to be there so somebody had to step up and try to take over. I did my best to try to provide energy for the team and lead the girls.”

The Bears went 15-4 in the regular season, posted a 12-1 league mark and went 8-0 in the Liberty Division in their title defense.

“There was definitely some pressure seeing the other teams coming and fighting extra hard to try and win a spot against us, but I think we handled it well,” Derstine said.

In the postseason, Derstine and the Bears dispatched Upper Merion in four sets in the PAC semifinals before avenging their lone league loss to Pope John Paul II, 3-2, in the championship for a second straight title — this one with the benefit of a true championship format and atmosphere.

“It was amazing just to be able to have that crowd,” Derstine said. “To have people support us and to have the other team also have a student section was awesome because it’s a motivation. You see them and you’re like, ‘I want to do better,’ because they’re encouraging the other side. It was an overall amazing experience to actually come out and defend ourselves and to win again.”

The Bears hosted and won a District 1 playoff game for the third straight season before concluding ending the year with losses to No. 1 Council Rock North in the 4A quarterfinals and Garnet Valley in playbacks.

Ludwig describes Derstine’s on-the-court skills as ‘off the chart,’ and a ‘nightmare’ for opposing coaches. Coaches around the league concurred. Even when teams attempted to triple team her, she found holes to score points for the Bears.

Along with her skills and athleticism at the net as both an offensive and defensive player, she was a weapon with her serve, changing games with a run a run of service points on multiple occasions, including a marquee non-league win over Bishop Shanahan to conclude the regular season

However, what stood out most to Ludwig and his staff during the course of Derstine’s career was the impression she left on the program’s younger players.

“There’s a lot of things people see on the court, but the thing that stood out to us as coaches was her dedication to the team off the court,” Ludwig said. “She was just one of those kids who was always willing to do the dirty work. First one in the gym, last one to leave. She would always lead by example by setting nets up and shagging volleyballs. Things a lot of times your stars don’t do, she does.

“Those things are things you can build on as a team and it becomes a self-fulling prophecy because it shows you if you do things the right way you can be successful. She showed the girls how to do that.”

Like the classes before them, Derstine — who will likely play at either Millersville or Kutztown next season — and her fellow seniors leave the Boyertown program in a better place than where they found it.

“We’ve become such a close family throughout the years that it’s so sad to leave, but I know I can come back here and I will still have a place, I’ll still be able to talk to the girls like they are my sisters,” Derstine said. “It’s just an amazing program, amazing coaching. I’ve loved every minute of it.”