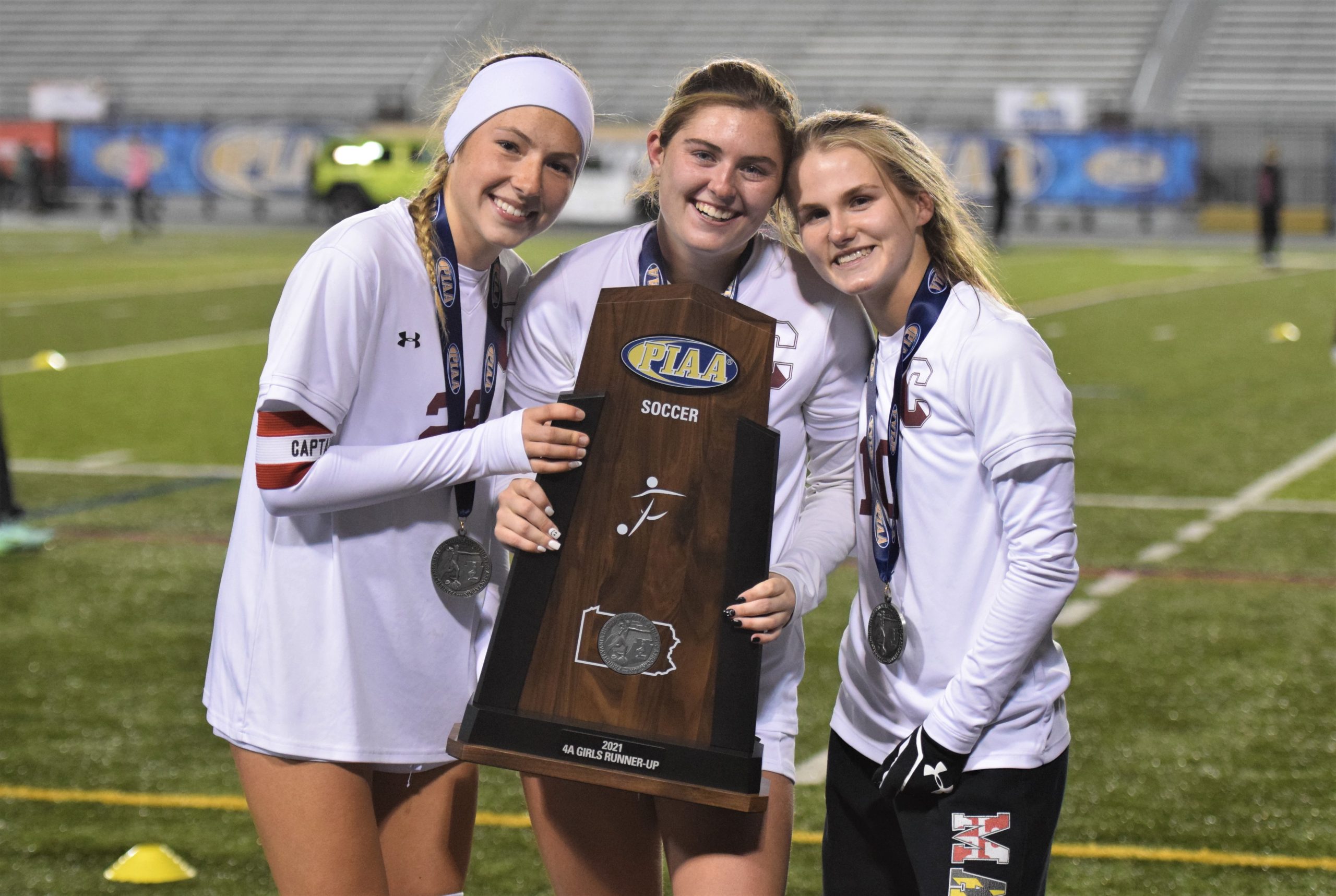 HERSHEY >> When two very good defensive teams meet up, breaks and turnovers usually decides the winner. Such as the case Friday evening at a chilly HersheyPark Stadium in the PIAA 4A girls soccer final. Unfortunately for Conestoga, Moon got both.

The Tigers grabbed the lead in the first half and added another goal en route to a 2-0 victory. Moon improved to 20-1-1 and captured its fourth championship in school history, its first since 2017.

“It feels great, it never gets old,” said Moon coach Bill Pfeifer, the second-winningest high school girls soccer coach in Pennsylvania history. “We weren’t sure we would get this far, but the girls worked hard and did it. All credit to them.”

The Moon captains pose with the PIAA championship trophy after defeating Conestoga in the girls’ 4A final Friday in Hershey. (Austin Hertzog – MediaNews Group)

The first 20 minutes were an evenly-played affair. Both teams had their share of the possession, but no dangerous chances threatened either goalkeeper.

Moon, though, struck first shortly after the midway mark. After a Conestoga foul, Kayla Leseck took a free kick from about 20 yards out, slightly to the left of goalie Margaret Steege. The shot smacked the right post and bounced to the left, Lizzy Hoff poked the ball back toward goal and Sydney Felton was the first to the rebound and knocked it in for a 1-0 lead with 18:07 left.

The Pioneers had five shots in the first half, two of them resulted in saves by Serayah Leech. The best chance came off a free kick from distance, but the effort from Megan Daly was safely gathered in by Leech.

Conestoga tried to ramp up the pressure in the second half, but the Tigers were resolute in defense. They didn’t allow anything from in close and Leech went without a save on four “Stoga shots.

They did have one excellent chance off a corner kick, defender Haleigh Wintersteen got position and skied for a header, but it went over the crossbar and the Pioneers remained a goal down.

“They played their hearts out and you could see it on the field. I’m really proud of them,” said Daly.

Conestoga’s Abby Klebe fixes her ponytail after receiving her runner-up medal after the Pioneers lost the PIAA 4A final to Moon Friday at Hersheypark Stadium in Hershey. (Austin Hertzog – MediaNews Group)

With 17 minutes left, the Tigers doubled their lead. A ball deflected into the box and a Conestoga defender went to clear it. Her attempt went straight to Leseck who gathered it in, took a touch, and buried a shot into the upper right corner.

Conestoga had chances to at least get on the board, but they went for naught as Moon heard the final whistle and exploded in jubilation.

The title game victory completed an incredible run for the Tigers. They won their last 18 straight games — 17 of them by shutout.

Moon’s Lizzy Hoff, left, and Conestoga’s Bella Rios battle for the ball during the first half of the PIAA 4A girls soccer championship Friday at Hersheypark Stadium in Hershey. (Austin Hertzog – MediaNews Group)

The Pioneers finished their season at 18-5-2 and a District 1 championship. After reaching the state final in 2019, their season was cut short after the Central League opted out due to the COVID-19 outbreak.

“Absolutely, and I think it made us want it even more,” said Daly. “We knew we could get here and not being able to get here last year just pushed us even more.”

“That’s the big thing for me this year,” added Wilson. “To be here (in the championship) in 2019 and opt out, and then with basically an entirely different group of girls, to make it back to a state final is really cool.”