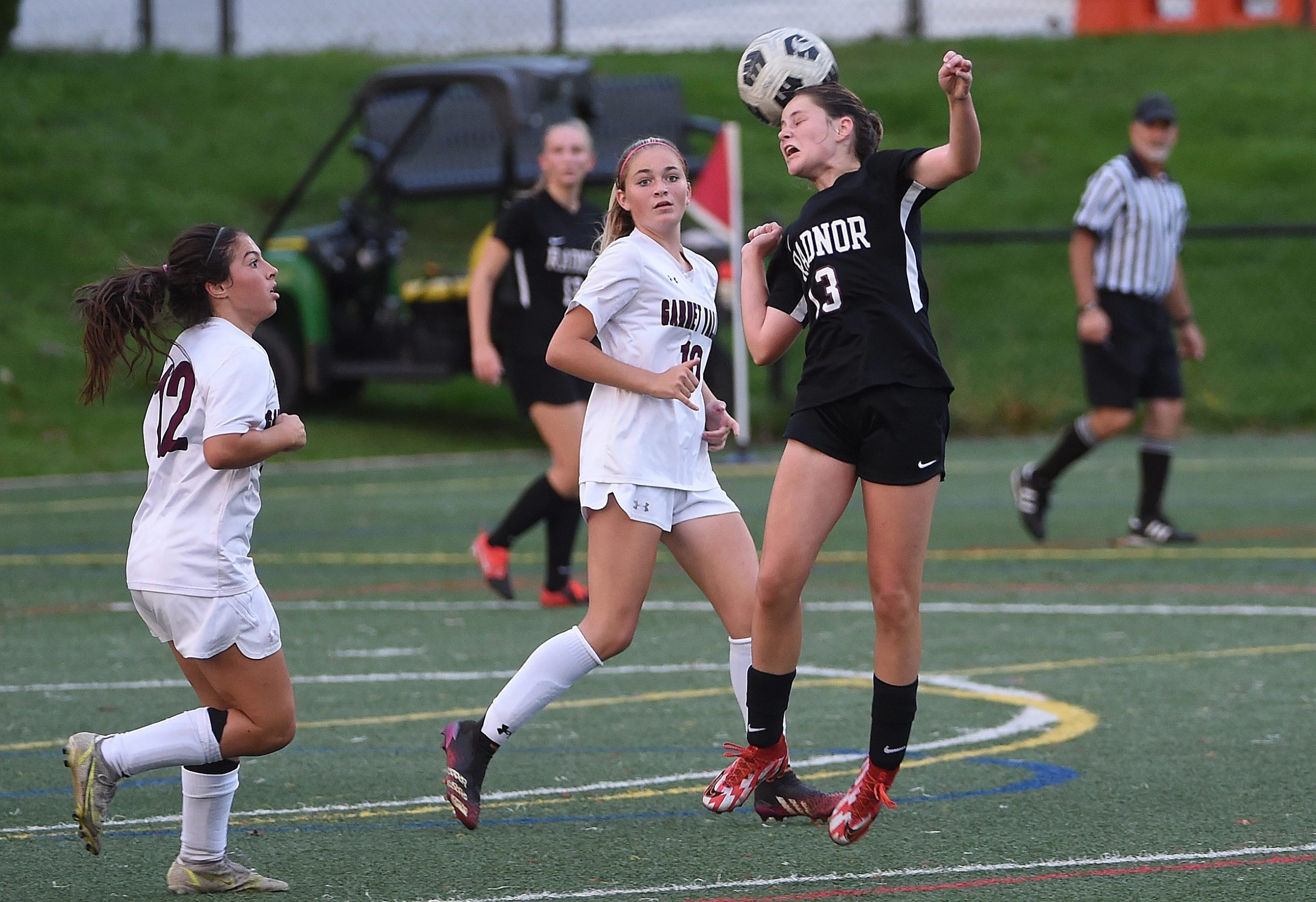 Radnor's Ivy Chaskelson, heading the ball in a regular-season game against Garnet Valley, scored the game-winning goal in the second half to lead Radnor to a 2-1 win over Greencastle-Antrim Tuesday in the first round of the PIAA class 3A tournament. (Pete Bannan/MediaNews Group)

RADNOR — In Ivy Chaskelson’s striking dreams, she’d struggle to draw it up better than what transpired in the 55th minute Tuesday night.

The inside-outing of a defender. The chip over her. The way the ball waited for her on the other side. The perfect pocket of space, behind a beaten defender and in front of a stock-still goalie, to stride into. The left-footed shot, the finish past a forlorn keeper, the celebration.

It broke a tied game in the first round of the PIAA Class 3A girls soccer tournament, which made it just perfect for the Radnor freshman.

“I’ve tried it before,” Chaskelson said, “and this time it worked. For a goal.”

It also furnished the perfect states return for Radnor after a 21-year hiatus, a 2-1 win over District 3 third seed Greencastle-Antrim. The Raptors (18-4) head for a second-round meeting with Northwestern Lehigh. The District 11 champ upended District 2 winner Dallas, 1-0, at its place. That game is Saturday at a neutral site to be determined.

Chaskelson’s goal, like the own goal that staked the Raptors a lead in the eighth minute, started with service by Edy McKenzie. It was one of several instances in which the speed of the Radnor front line unlatched the Blue Devils’ defense.

One, in which Chaskelson had only goalie Alexis Nelson to beat, looked like a handball and a certain red card on Nelson when she charged 35 yards off her line, but the three referees didn’t see it that way. In the decisive moment, though, Chaskelson finished another big chance.

The effort only held up, though, because of someone who was relatively little used in districts. Goalie Mallory Toomey didn’t have much do to in Radnor’s climb to a District 1 title, such was the way that Radnor defended effectively with the ball and kept opponents pinned back in not allowing a goal over three wins.

Free kick short to Rylee Henson, but she’s doesn’t get much steam on it. Mallory Toomey the save.
4 minutes to half pic.twitter.com/NsNt2XPZ1j

That level of inactivity is fine with Toomey, as long as it means wins. But Tuesday, against a Greencastle-Antrim team that had won 19 straight games at one point and scored 112 goals in 22 games, sophomore Toomey was busy early and often.

“Honestly, it was a solid team, but if you get scared in the goal, it’s all over,” she said. “Once you break mentally, your body follows. You have to be resilient, and even if you’re down 4-0 … it doesn’t matter if you mess up all of the saves that come at you, you have to stay resilient. And even if it is a 112-goal team, that doesn’t mean I can’t help contribute to a win.”

Once Radnor scored early, McKenzie beating a defender down the left side and crossing a low and hard ball that defender Shaina Overcash directed into her own net, the Blue Devils (20-3) had license to come forward in waves. They were shocked not to be at least even at halftime, with Toomey making three saves and center back Olivia Kelley sweeping a back-spinning effort from GA midfielder Mia Libby off the line with four minutes left in the first. One of the saves, Toomey leaping at full stretch to her left to get a whisper of a finger on a Courtney Andruczk drive in the 33rd, was stupendous.

An attack as potent as Greencastle-Antrim’s would not be muted, though, and it cashed in the 44th minute. Libby won a 50-50 battle in midfield, funneled the ball to Andruczk on the right to square to Haley Noblit. The sophomore forward’s first-timed finish with her left pinged off the inside of the far post and in, leaving Toomey no shot on her 28th goal of the season.

But Radnor bounced back from what Toomey diagnosed as a mentally tiring end to the first half. Minutes after the goal, she threw her body at a pair of Andruczk attempts within five seconds, the second fought off just enough to trickle wide of the post for Kelley to boot to safety. She just seemed to have the number of a forward who entered with 25 goals on the season.

“All I could think about was, I’m playing for these girls and I’m playing to have another game with these girls,” said Toomey, who made six saves. “I saw the first shot, and my body just reacted. And the second one, I was just up and I was ready to go. And the entire time, all I could think about was, this cannot be our last game and this cannot be how it ends.”

After Chaskelson scored, Radnor opted for offense as the best defense. Selah Koleth struck the outside of the post in the 75th. It countered a volley that Libby had gotten under just four minutes early that floated until it struck the top of Toomey’s crossbar. Nelson (five saves) spilled an Emily Daiutolo drive from 35 yards that went through the wickets, but she was fortunate to see it squirt wide of the post.

Noblit was absent for the hectic finish, injured while running into Toomey in the box, correctly whistled as a foul. The Blue Devils had three corners in the dying moments. But one was gloved by Toomey, then Daiutolo headed the other out, allowing the horn to sound before another could be delivered and setting off the celebrations.

Unionville falls to undefeated Hempfield in opening round of PIAA 4A girls volleyball tourney
PIAA Class 3A Volleyball: O’Hara falls to York Suburban in tight match