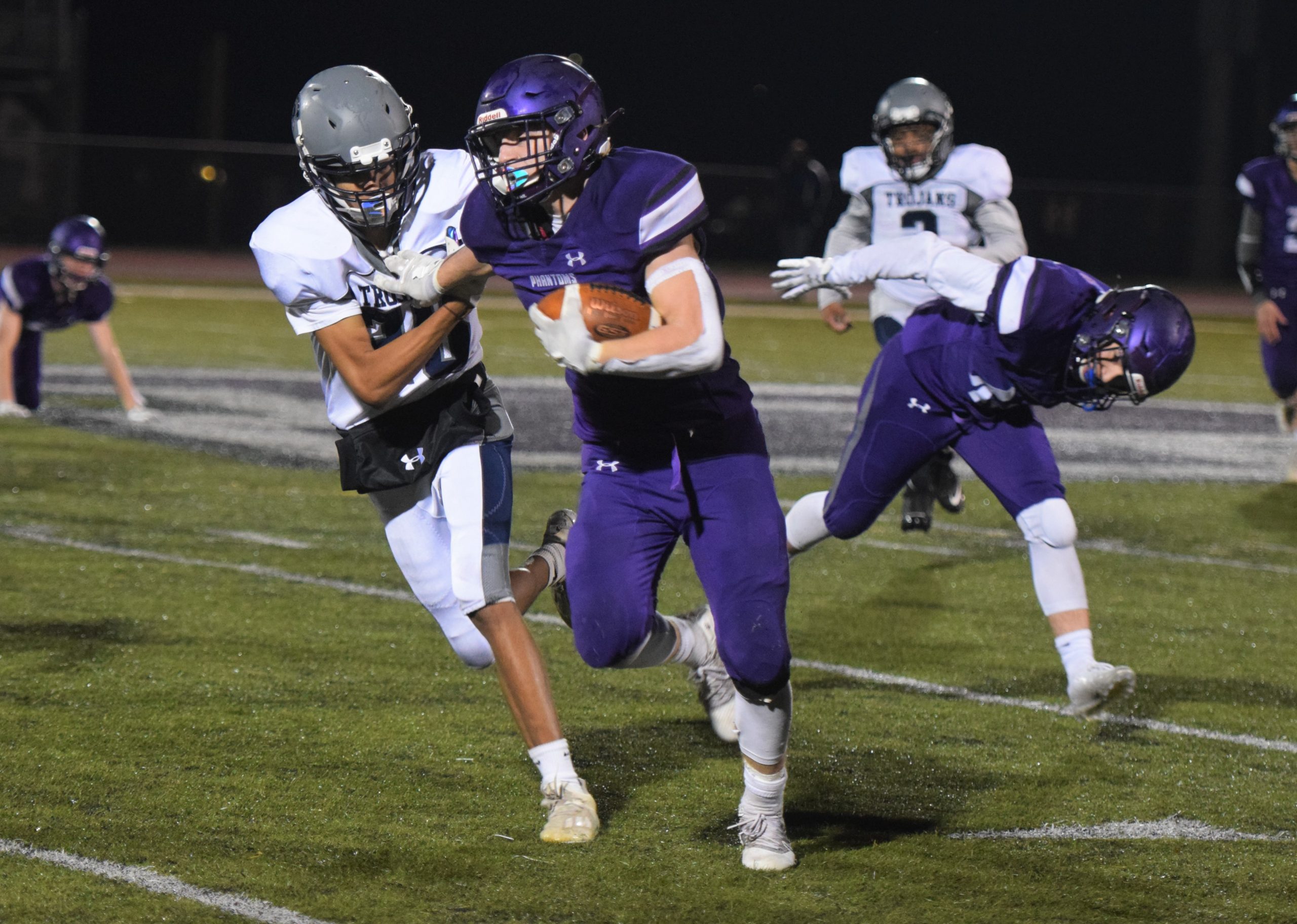 PHOENIXVILLE >> Owen Koch’s high school football career has offered repeated glimpses of what might be.

His senior year has become the realization of that promise.

Koch carried 12 times for 119 yards and three scores on Friday night, crossing the 1,000-yard mark for the 2021 season in Phoenixville’s 41-7 Homecoming win over Pottstown at Washington Field.

The win sends Phoenixville (4-4, 3-2 PAC Frontier) into a crossover matchup next week with either Spring-Ford or Owen J. Roberts. For the Phantoms, it’s a chance to not only bolster their standing in the District 1 Class 5A playoff race, but to clinch a winning regular season record in coach Anthony Ciarlello’s first year as the full-time head coach.

“It was a goal of ours — to get to .500, and hopefully finish with a winning record,” said Ciarlello. “It’s been a while, but it’s a process that started with Don [Grinstead, now the school’s athletic director] and still is continuing.”

His sophomore year, Koch injured his collarbone in the Phantoms’ season opener, returned for one game in which he rushed for over 200 yards — but lost the rest of the campaign to injury.

Last year, of course, was pandemic shortened, but Koch earned second-team All Area honors in only four games as he barreled for 465 yards and five scores in only four contests.

“To be honest, we as linemen were overjoyed when we heard [Koch got 1,000 yards],” said offensive lineman Roman Ciavarelli.

“We’ve grown up with Owen, playing together, forming a brotherhood,” added linemate Solomon Ortiz. “We’ve grown a bond to protect him at all costs.”

“He’s the kind of guy you want to block for,” said Ciavarelli.

Phoenixville got the early jump with a thunder (Koch) and two bolts of lightning (junior Ahmid Spivey and senior Tre Davis) approach to the running game. Koch broke outside for a 24-yard score four minutes into the contest, and finished the first quarter with a one-yard scoring dive. In between, Spivey bolted from midfield untouched for a 49-yard score, and the Phantoms’ lead was 20 after only 12 minutes of play.

Their defense, led by Koch and Sam Moore, was equally prolific, holding Pottstown to only 48 total yards before the half and forcing punts on all four Trojans possessions in the opening 24 minutes. Davis made up for a fumble with a pair of long runs that set up QB Ty Romance’s sneak with eight seconds to play in the second quarter, making it 27-0 Phantoms at the break.

Following the break, Koch’s third TD run of the night — also his final carry — went for 33 yards and put him over the 1,000-yard milestone. Ty Romance’s pass to Spivey made the advantage 35-0 for Phoenixville.

Pottstown’s Dillon Mayes exploded down the right sideline with 2:47 left in the third quarter for a shutout-busting 74-yard TD run.

Trey Lear concluded the scoring with a nine-yard run for the Phantoms in the final minute.

The Phantoms came into action at No. 11 in what will be a 16-team field in the District 1-5A playoffs, and depending upon other results around the area could move up several more spots. Add in the bonus points available with a victory over a 6A school next week, and there’s a chance Phoenixville could find themselves at home in two weeks to open the postseason.

“The crossover game — before the playoffs this is probably the biggest game of the year,” said Koch. “A win next week would keep our momentum going, just in time to start the playoffs.”

“I’m kind of speechless that we could host a playoff game,” added Sam Moore. “A few weeks ago we just wanted to make the playoffs.”

Pottstown (0-9, 0-5 PAC Frontier) will try to salvage a victory next week when they visit Norristown in a crossover contest. Mayes finished with exactly 100 yards rushing in a losing effort.

“It would mean a lot for our seniors to get that win next week,” said Mayes. “We haven’t won a game in a couple years, and that’s something we really want for them.”

West Chester Rustin rolls past Great Valley
Kamara does it all, powers Interboro past Avon Grove