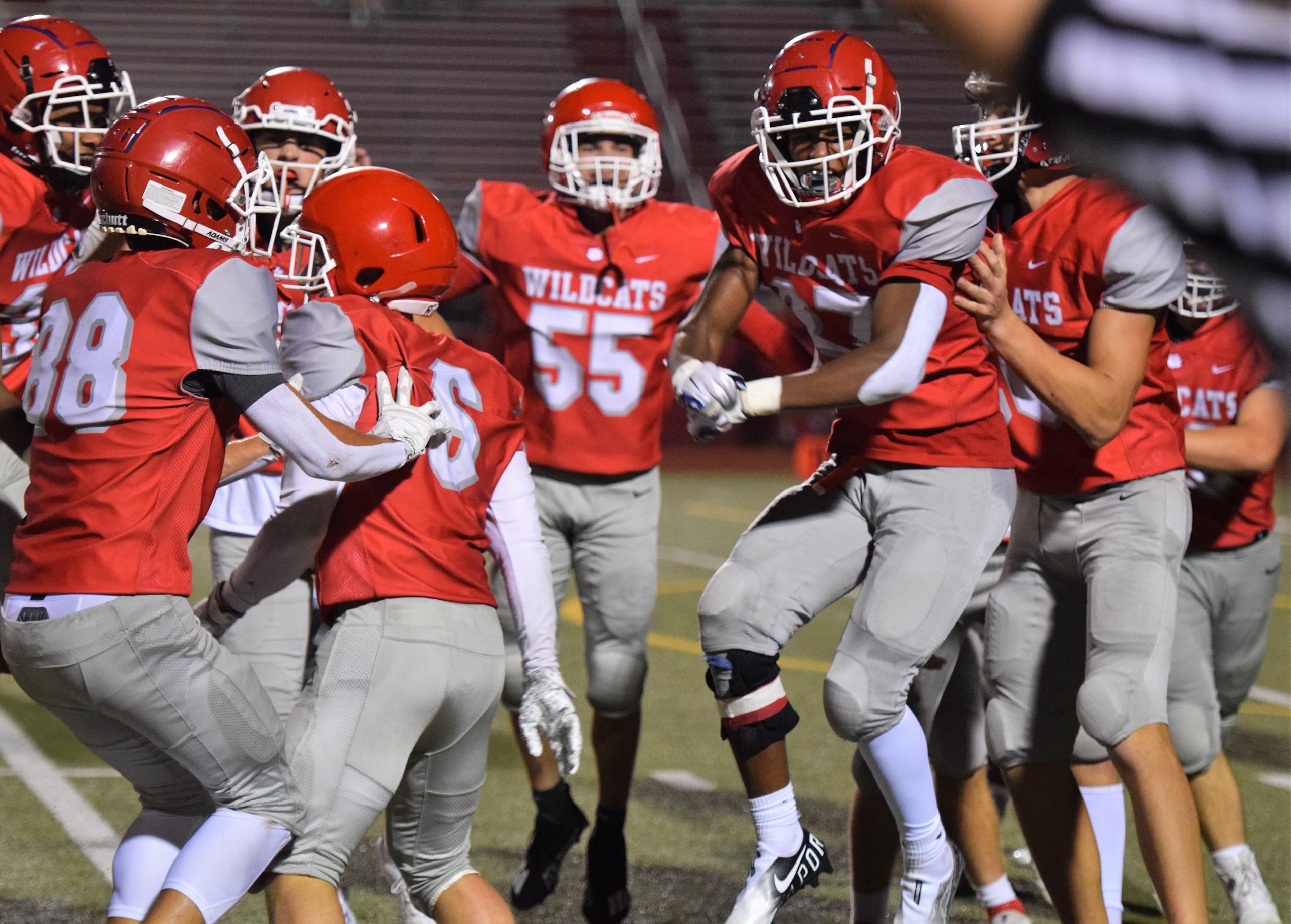 BUCKTOWN >> Consistency is the most dependable hallmark of success in sports.
But when a player or team is consistently spectacular, that’s when you have the makings of a special season or performer.

And those are the two best words to describe Avrey Grimm’s 2021 season. But on Friday night, even the Owen J. Roberrts senior running back was overshadowed by a Wildcats’ defense that keyed a tight 7-6 win over Methacton at Henry J. Bernat Stadium.

Jon Havrilak (two sacks) and Dominic Franks (three tackles for loss, INT) led a dominant defense that held Methacton to 159 total yards and forced punts on every Warriors drive in the first three quarters.
“We’ve had players out a lot, we’ve had to work through that,” said Havrilak, a senior captain and reigning PAC two-way player of the year. “We’ve pushed through it and come out better for it.”
The one Methacton drive that didn’t end in a punt saw Franks jump a crossing route on fourth down for an interception with 4:43 to play that gave the Wildcats back the ball for good.
“I saw that crosser,” said Franks, “and I’d dropped [a potential interception] earlier. I wasn’t letting go of another one.”
Grimm’s season rushing total now moves to an eye-popping 1.262 rushing yards over a half-dozen contests with his 193-yard performance Friday on 29 carries. He was more workhorse than explosive against a stout Methacton front, but it’s no accident that the Wildcats are now riding a five-game winning streak (5-1, 2-0 PAC Liberty) into next week’s showdown of co-Liberty Division leaders at Perkiomen Valley.
“We’re feeling amazing going into next week,” said Franks.
Grimm’s performance keyed an almost perfectly balanced OJR attack (204 rushing yards, 201 passing) that nonetheless only managed to cross the goal line once, when QB Michael Reed (19-26, 201 yards passing) powered over from the one-yard line with 4:14 left in the third quarter. Carson Johnson’s PAT provided the ultimate margin of victory.
Reed’s favorite target on the evening was junior Dan Cashman, who grabbed seven receptions for 125 yards, including a fourth-down catch to extend the TD drive.
A rather quiet, scoreless first half started matters until Methacton’s Chris Augustine found himself the recipient of a rushed OJR pass with under a minute to play until halftime. The All-Area linebacker made his good fortune count as he scooted 43 yards down the sideline to give the Warriors a 6-0 lead at the break and what would ultimately be their only points of the night.
Up until that point, both defenses bent at times but stiffened as their opponents approached the red zone. Giancarlo DeFilippis ended OJR’s best early threat with a end-zone INT early in the second quarter, while OJR’s Jon Havrilak and Christian Gregory caused a miscommunication for a big loss on a Methacton zone read in Wildcats’ territory.
OJR took advantage of soft outside coverage to move the ball on Methacton midway through the second period, a drive highlighted by a 35-yard connection between Reed and WR Cashman.
Once again, however, a scoring opportunity was averted, this time a self-inflicted wound for the Wildcats on a high snap on a 22-yard field goal attempt.
It wasn’t until the 3rd quarter TD drive that OJR was able to turn their continued favorable field position and balanced attack into points.
Methacton (4-2, 1-1 PAC Liberty) saw their own three-game winning streak come to an end. The Warriors will look to bounce back at Boyertown next Friday.
“Our goal was to hold [Grimm] to 100 yards or less,” admitted Warriors coach Brian Kennedy. “But in the end, [OJR] scored only seven points. Both teams really came to play tonight — but we’ve got to put the ball in the end zone.”
Warriors QB Dan Brandi passed for 146 yards, but the Warriors managed only 13 rushing yards on 17 attempts. Brian Dickey led the way with four catches for 58 yards and made several tackles on defense.
“He puts his head down and grinds on every play,” said Kennedy. “He’s a joy to coach.”
For the Wildcats, Perk Valley week has already begun. “That’s a great team, and they have a great quarterback (Ethan Kohler),” said Havrilak.
“But if we work like we did tonight, I think we’ll come out just fine.”