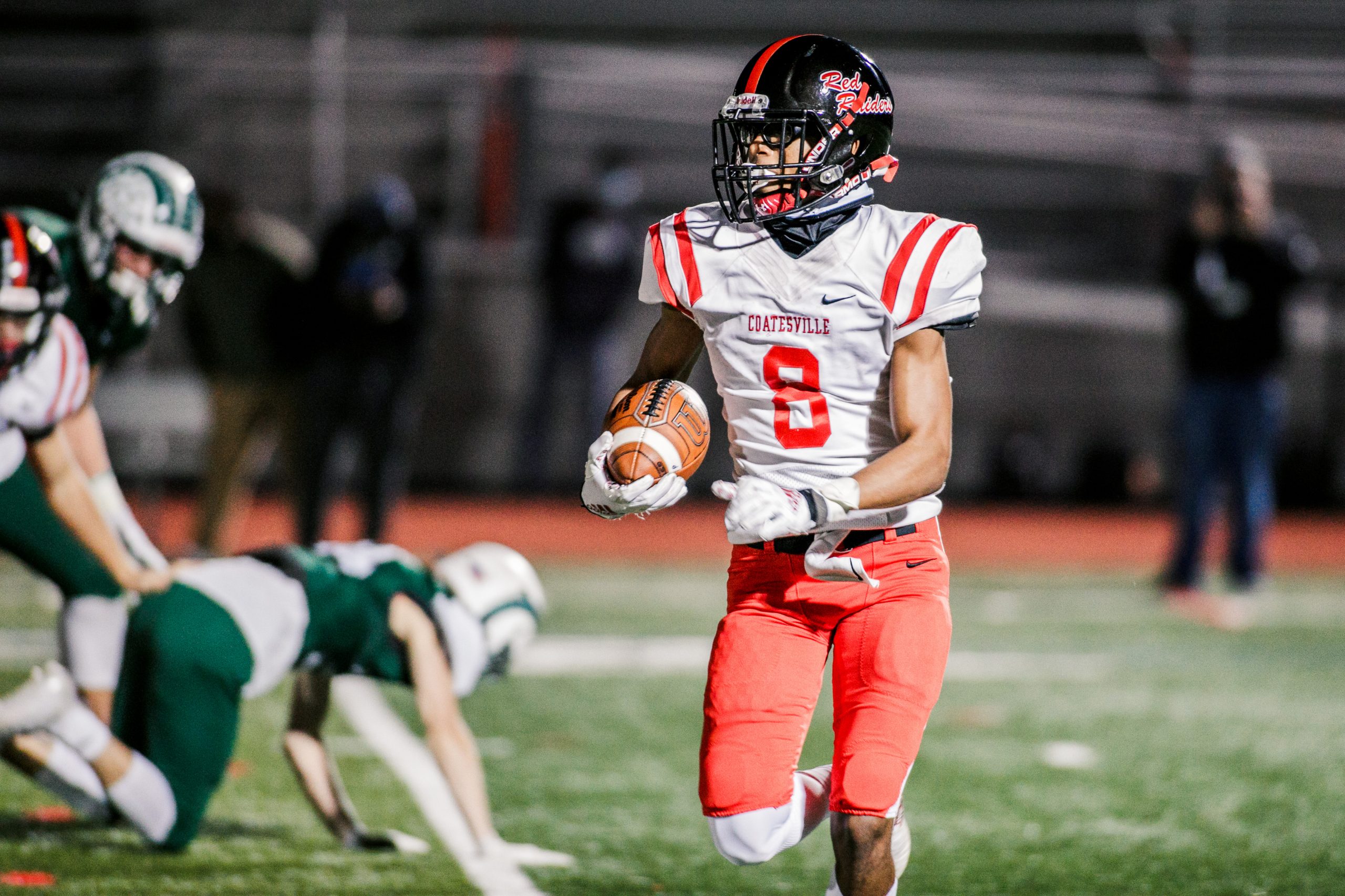 LONDON GROVE >> It is virtually impossible to have a more efficient half of football than Coatesville’s Lebron Messick had on Friday at Avon Grove.

The fleet-footed senior wideout scored three early touchdowns, which wasn’t terribly unusual. But he did it while touching the football just three times in the first half. It helped the Red Raiders overcome a sloppy start and roll to a 35-0 victory over the Red Devils in the Ches-Mont National opener for both.

“We came into the game wanting to get Lebron some touches,” said Coatesville head coach Matt Ortega. “He’s a guy we are going to need in the big games moving forward. He certainly got it done today.”

The 6-foot speedster found the end zone on a pair of electrifying punt returns of 73 and 57 yards, and also hauled in a scoring strike from quarterback Harrison Susi. It helped to overcome a lackluster evening for the Raiders’ attack, which managed just 229 yards of total offense.

“That’s football,” Ortega said. “Sometimes the offense is red-hot and today we had to count on the other side of the ball.”

Other than Bessick’s heroics, the big news for Coatesville was the resurgence of the same defense that surrendered 71 combined points in the previous two outings. The Raiders allowed just 128 yards of offense and forced Avon Grove into five turnovers.

“We went back to square one on the fundamentals,” Ortega explained.

“We really challenged our defense, especially after what’s happened the last two weeks. We knew we had to take care of business on that side of the ball and we were able to do that. We created all of those turnovers.”

Now 3-1 overall, Coatesville will host West Chester Henderson next Friday. For the Devils (1-3 overall), it ended up being a fine defensive performance that was sabotaged by the punt returns and the giveaways.

“I was proud of our defense,” said Avon Grove head coach Joe Coffey. “We battled, but we turned it over so that will be an emphasis next week.”

It was a very sloppy start by both sides as there were five combined turnovers in the first quarter alone. The Devils coughed it up four times in the first half, and the Raiders had a couple touchdowns called back due to holding penalties, but eventually scored anyway.

“We struggled the first eight minutes, but we have that ‘Ville mentality and we started to bring it,” said Bessick, who had 168 return yards in the contest.

Avon Grove turned it over on its first three possessions – including a fumble recovery and an interception by junior defensive back Spencer Ferguson — and yet somehow exited the first quarter in a scoreless tie. But the dream of an upset began to crumble early in the second when Coatesville runner Bryan Lacey went the final 13 yards to culminate a 9-play, 58-yard march.

After a three-and-out by Avon Grove, Bessick made it 14-0 with his first punt return. Moments later, Raiders’ lineman Takiyah Lynch pounced on yet another Devils’ turnover, and that led to a 37-yard scoring toss from Susi to Bessick.

“(Bessick) is the fastest player in the conference so we want to give him some confidence heading into our big games,” Ortega said.

Another three-and-out by the Devils soon followed, and Bessick took the ensuing punt to the house once again. In all, Coatesville had scored four TDs in an 8:16 stretch.

“I just caught them and used my speed to get to the outside,” Bessick said when asked about the punt returns. “I was surprised – I thought they’d kick it away from me on the second one.”

According to Coffey, there were very few punt returns in Coatesville’s previous outing (a 44-39 shootout loss to William Penn of York). So Avon Grove wasn’t completely prepared for Bessick’s speed on special teams.

“(Bessick) is obviously a burner,” he said. “The first punt we did not cover well. The second one we just got it away and it went right to him and he took off again. We tried to kick it away from him, but they were bringing heat.”

Bessick then opened the second half with a 38-yard kickoff return, and that set up the game’s final score: a 10-yard pass from Susi to wideout Tommy Ortega.

“Lebron can create plays that may not be there,” Ferguson pointed out. “He is very fast. In practice sometimes, it can get ugly because he can burn you.”

It was, by far, the Raiders’ best defensive outing this season. The Devils managed only 79 rushing yards (and three lost fumbles) and just 49 passing yards (and two interceptions).

“It feels great to see the zero upon the scoreboard, especially after what happened last week,” Ferguson said. “We had to step it up and we are realizing what we can do if we work together as a unit.”

Runners Anthony Lorusso and Thad Binstead combined to gain 89 yards on 22 carries, but the rest of the Avon Grove offense managed a mere 39 additional yards. On defense, the Devils allowed just one play from scrimmage longer than 22 yards, and held Susi in check running the football.

“We didn’t duck-tail,” Coffey said. “It may not look like it on the scoreboard but ur players elevated themselves. There are no moral victories but they were competitive. We just have to take care of some of these smaller things.”