Washington does it all as Bonner-Prendergast rallies in final minute 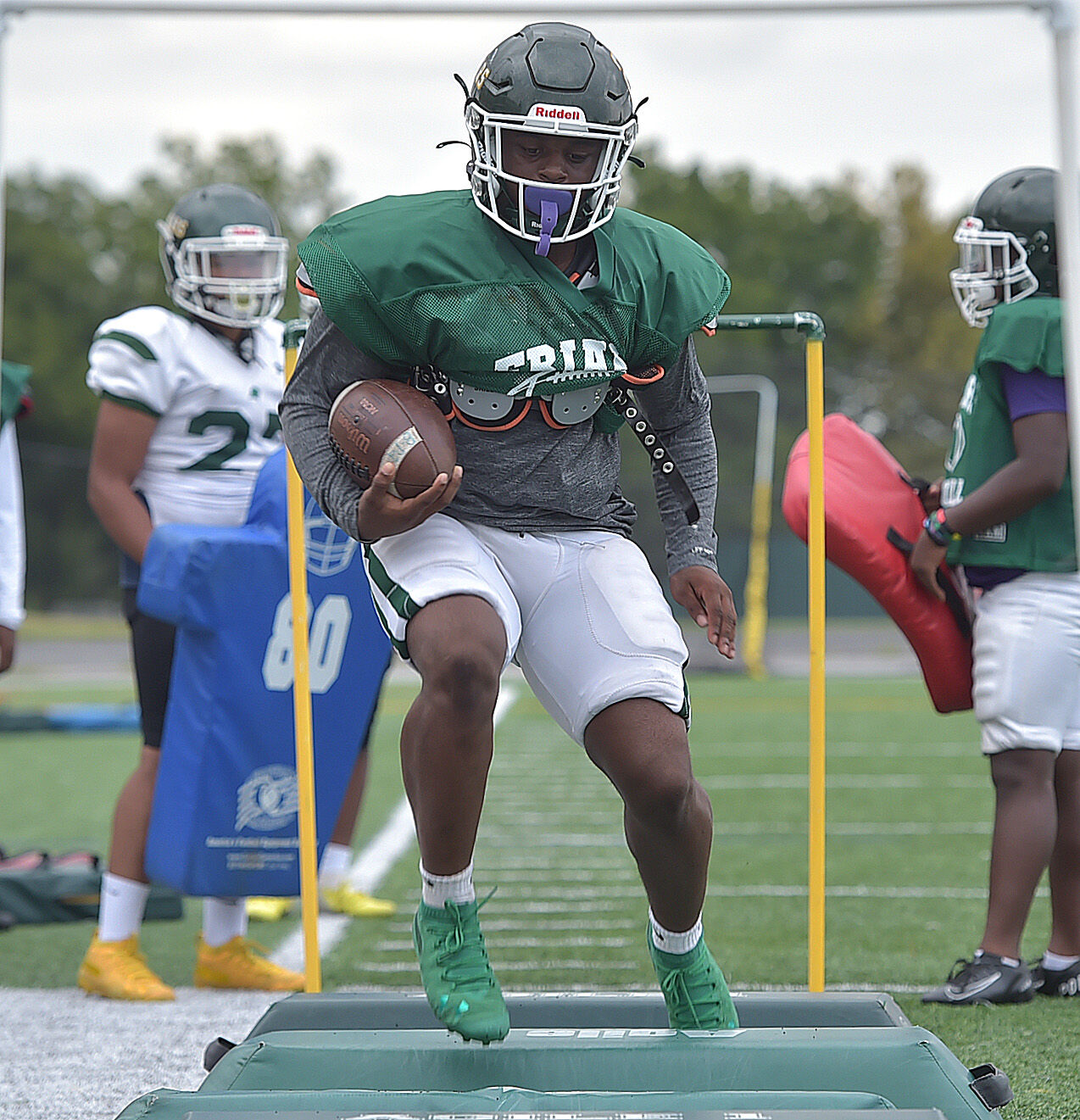 UPPER DARBY — Roman Catholic quarterback John Ingram rolled out, knowing he needed 49 yards in 4.4 seconds, and looked for a receiver. Instead, all he saw was the big guy in Bonner-Prendergast white with the yellow gloves.

Those were the same hands that reeled in the only touchdown of the first half. The same mitts that blocked a punt. The same paws that waved at quarterback Sean Mulholland when he beat a linebacker on a seam route 30 seconds earlier and then confidently hauled in another touchdown.

And those hands, belonging to David Washington, wrapped up Ingram as he scrambled out of the pocket, extinguishing the last hope of a desperation Roman comeback.

Washington did it all for Bonner-Prendergast Friday afternoon, catching the winning nine-yard touchdown with 37.2 seconds left in a 12-7 victory.

Washington had scored Bonner’s first touchdown, a 13-yard corner route in the first quarter. Between that score and the Friars’ final drive, so much had changed, and not for the better.

First and foremost, the Roman Catholic offense found itself for one possession, which in this throwback slugfest was almost enough. On a day where Roman punted five times and had eight first down, a 42-yard hookup between Ingram and Tysheer Denmark rated as a genuine game-breaker, the super sophomore running under a lofted sideline route.

Two plays later, Mao Howell bounced a run off-tackle for 24 yards. With Ndori Jeack’s extra point, the Cahillites had a 7-6 lead with 3:47 left in the third quarter.

Bonner-Prendie’s rally attempt was blighted by wholesale halftime changes on the offensive line. Out went both starting tackles, David Kpeglo and Mekel Marshall, due to injury. Just for good measure, lead-blocking fullback Scott Bernhard-Kyle was lost for the day, too.

Mekhi Smallwood wraps up Washington a foot shy of the yard to gain on 4th. Roman ball pic.twitter.com/i41lSJTvCQ

That shifted Nick Bozzetto from center to left tackle, Aiden McGoldrick from left guard to center and forced a complete rebuild of the right side. “It’s adjusting through adversity,” senior captain Bozzetto said.

“Next man up has got to fill in,” said Washington, a disruptor on defense from his end spot. “Younger guys have got to fill in. You never know when you’re going to get to play. Everybody’s got to be ready.”

With those impediments, the Friars were left to chase down a deficit. They got close in midway through the fourth, a 13-play march covering 76 yards. But it stalled at the 7, Washington hauling in a pass but wrapped up and dropped less than a yard short of the mark by Roman’s Mekhi Smallwood.

Mulholland struggled with a pair of interceptions thrown, including a pick by David Macon inside the red zone in the second quarter and one snatched by Mike Preston one play after Damir Williams-Bey had intercepted Ingram. Mulholland was 6-for-12 for 59 yards, five receptions and 51 yards to Washington.

That left the Friars to hammer Plan A: Mason Peterson. The running back carried 33 times for 132 yards, no matter who was or wasn’t blocking for him. So gassed was the hard-running bell-cow back that he took most of the second-half huddles on a knee to conserve energy.

“He’s one of the most competitive kids you’ve ever seen,” Muldoon said. “He’s insane. He’s very talented. Every run, since he was a sophomore, he runs it like it’s the last time he’s ever going to get the ball. He has ridiculous vision and great balance, but you couple it with that great desire to just gain every foot and every yard, he’s a tough dude to deal with for a defense.”

Shane Mulholland finds David Washington in the corner for a 13-yard score. Bonner up 6-0 pic.twitter.com/mjuQDlMrjy

Even that, had a limit, though. Peterson broke off a 19-yard run to get the Friars to the red zone but was stacked up twice before Washington’s fourth-down denial. The next drive was set up when Peterson returned a punt 28 yards to the Roman 20. He ground out two yards on fourth-and-1 from the 11, but went forward for two, then backward for two on the goal-to-go.

On Washington’s score, Peterson played the decoy, sprinting in motion to the left opposite a trips formation, freezing the linebackers long enough for Washington to get behind them.

When Washington next made a play, ending Roman’s final drive, the day’s work was comprehensively done.

“One word,” Washington said, of the feeling after tackling Ingram. “Happiness.”