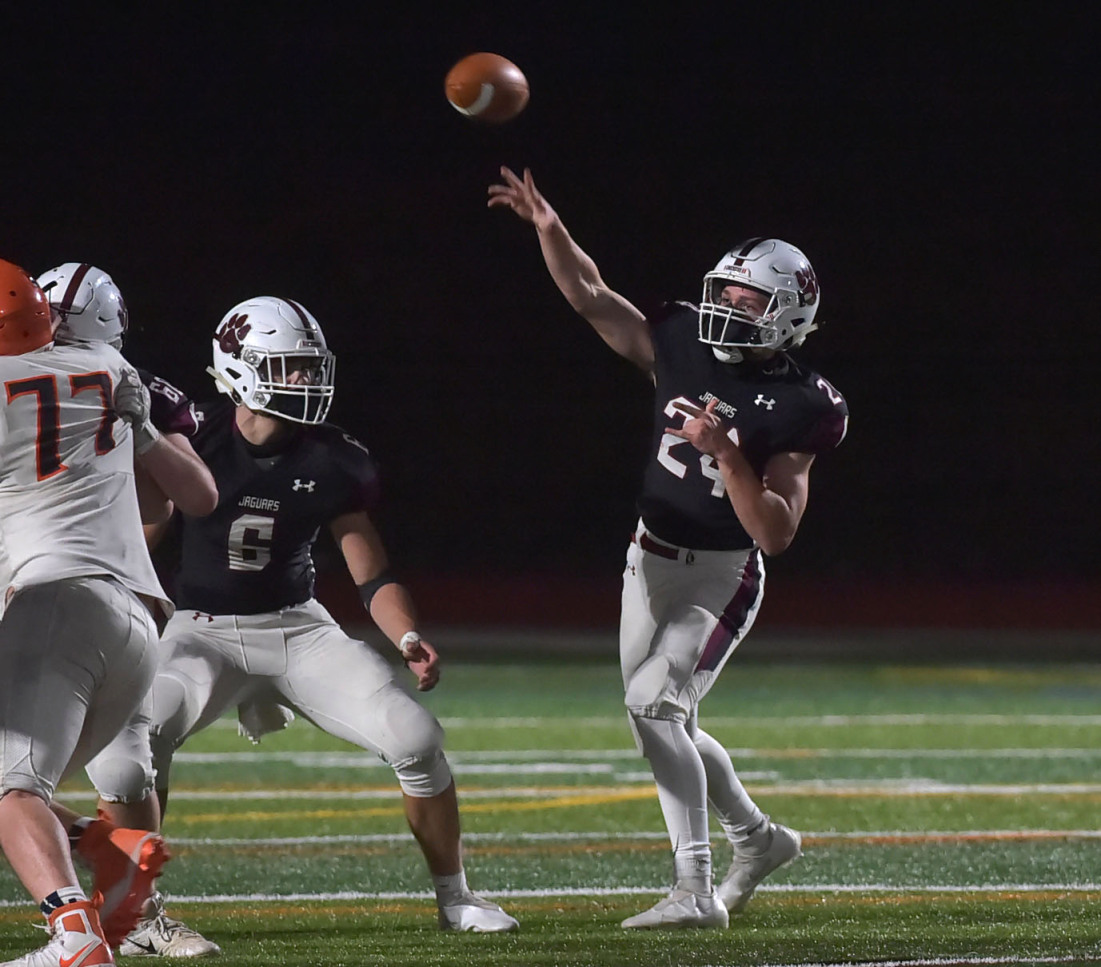 CONCORD — Garnet Valley has a wide variety of offensive weapons, which were on display in a 55-14 win over Conestoga Friday evening.

One week ago, Garnet Valley ran the ball 38 times for 273 yards and threw only five passes in a 41-7 win against Downingtown West. Friday, the Jaguars switched gears, turning to a potent passing attack to build a comfortable 40-14 halftime lead against the Pioneers.

“Max is a really balanced quarterback,” Garnet Valley coach Mike Ricci said of the Notre Dame lacrosse commit. “He can throw the ball, run the ball, he’s a phenomenal decision maker. Our offense likes to take what the defense gives us, and Conestoga had eight men in the box, so Max did a great job of taking advantage of that and hitting the open guy. Our offensive line played really well tonight, gave him good protection.”

On their first possession, the Jaguars drove 61 yards in seven plays for a touchdown, highlighted by Busenkell connecting on three consecutive passes for 44 yards, including a 29-yard catch by senior Ryan Saunders. Two plays later, Saunders ran up the middle for a 5-yard touchdown.

Early in the second quarter, with Garnet Valley holding a 14-0 lead, Conestoga exploded for a quick touchdown. On third-and-10 at the Conestoga 48, Pioneer quarterback Calvin Shirley hit Peter Detwiler with a short pass on the right sideline. Detwiler made a nice cut, eluded two defenders and raced down the right sideline for a 52-yard touchdown.

Garnet Valley answered right back. Sean Gallagher returned the kickoff to midfield, and senior wide receiver Ndozi Okolo made a fine leaping catch for a 35-yard reception to the one. Junior back Jason Bernard battered over the goal line, and Gallagher scored on the two-point conversion to make it 22-7.

Garnet Valley senior back Shane Reynolds, who gained 135 rushing yards in 10 carries against Downingtown West, was sidelined with an injury but the Jaguars’ offense continued to hum.

“When Shane went out, I liked the way he reacted on the sideline, he stayed there and helped coach the other kids,” said Ricci. “Jason Bernard came in, and he’s a strong, physical kid who runs really hard, and I love the way he ran tonight. Ryan Saunders also did a good job.”

Garnet Valley’s defense then turned up the pressure, pinning Conestoga deep into its own territory and forcing a safety.

Following a 14-yard touchdown pass by Busenkell that gave the hosts a 32-7 lead with 3:39 to play before halftime, Conestoga came right back with a 91-yard kickoff return by Patrick Reilly, who found a hole up the middle then raced down the left sideline.

“Going in we knew how good of a football team Garnet Valley is,” Conestoga coach Matt Diamond said. “They provide a bunch of challenges with their unbalanced sets, with the different looks that they give. And with the deception that Garnet Valley gives, your kids have to read their keys, they have to trust their keys, and they have to react instantly. And if you hesitate, their linemen get up on your linebackers real quick, and it becomes where they’re able to move the ball on the ground. Garnet Valley is a very good football team.”

“I’m really impressed with Conestoga; they’re a team on the rise,” Ricci said. “The score doesn’t show it too much tonight, but I thought they did a lot of really good things on offense.”