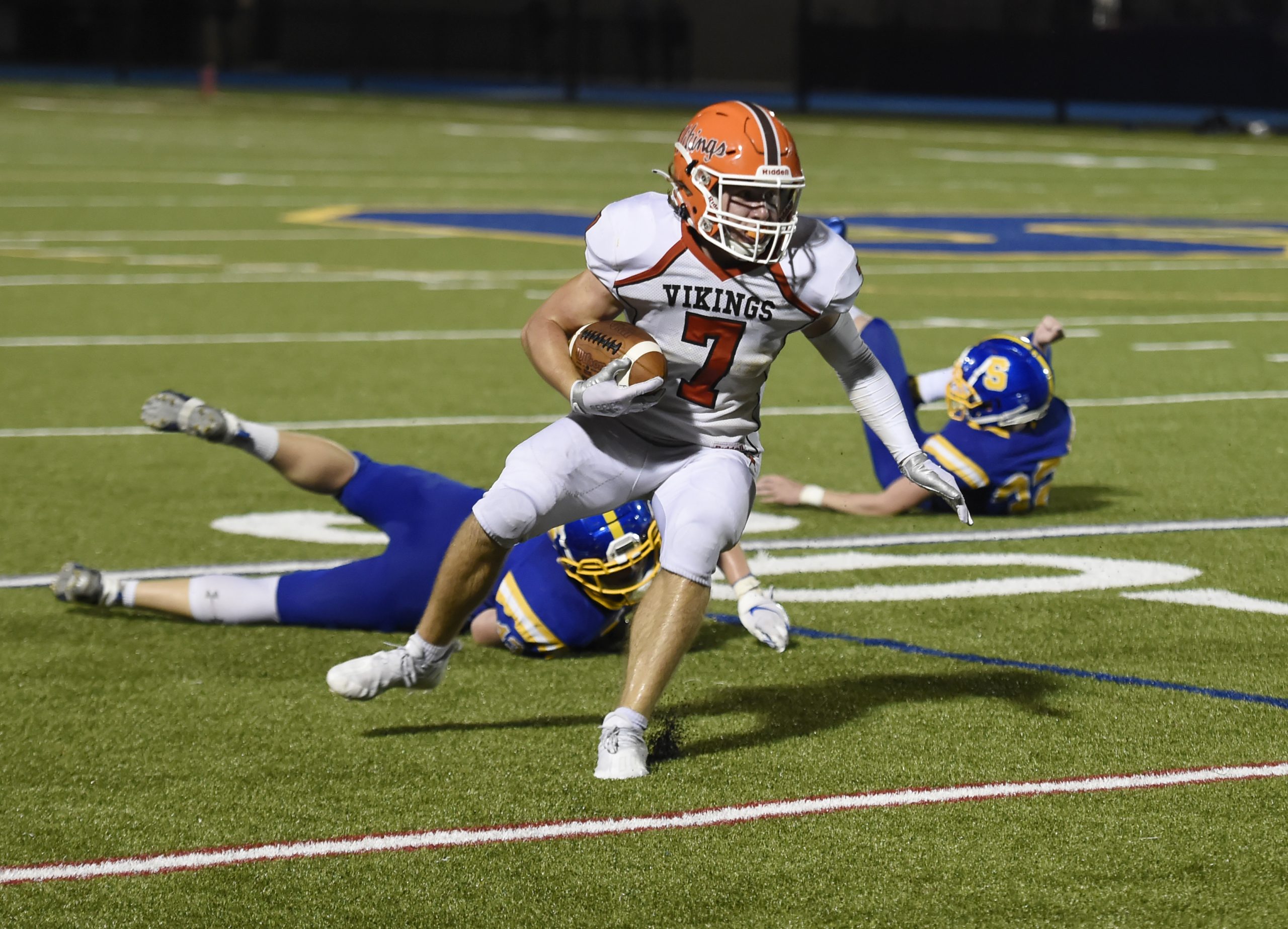 SPRINGFIELD >> Junior Ryan Klimek plans on doing a little bit of everything for the Perkiomen Valley football team this season.

Running, receiving and even kicking fit under Klimek’s job description when PV has the ball. He also plays defensive back.

Each of those skills were on display Friday night as Klimek helped the Vikings to a 37-15 opening night win over Springfield-Delco.

Klimek combined for 135 total yards — 84 on the ground and 51 in the air — and two touchdowns (one rushing, one receiving). He also added four extra points and a field goal with his leg.

The junior running back’s multi-purpose efforts combined with a three-touchdown performance from senior quarterback Ethan Kohler to guide the Vikings to victory.

“I’m just trying to help my team the best I can,” Klimek said. “It’s all team. I can’t do any of this without my offensive line and stuff. It’s not just me, it’s a team effort.”

From left, @pv_vikingfb’s Ryan Klimek, Zach Schimpf and Ethan Kohler guided the Vikings to a 37-15 win over Springfield on Friday night. pic.twitter.com/qnqV3CMxR9

Springfield struck first Friday night when junior quarterback Jake Rama tossed a short pass to senior wideout Robby Longo, who broke 48 yards for a TD to give Springfield a 7-0 lead with 9:02 left in the first quarter.

Rama combined for a pair of touchdowns and netted 100 yards through the air. Longo caught five passes for 64 yards in the game.

After halting Perkiomen Valley’s ensuing drive at the Cougars’ four-yard line, Springfield had a chance to take control of the game. Instead, Vikings’ senior Zach Schimpf picked off a Rama pass on the Cougars’ next offensive play, returning it to the end zone to tie the score, 7-7.

The pick six started a run of 23 unanswered points for the Vikings.

“I really think that swung the momentum,” Schimpf said. “Once that happened, the offense started rolling, it gave our defense more confidence to make big plays and I think it helped a lot overall.”

A 21-yard touchdown run by Kohler and 41-yard field goal by Klimek sent PV into the half with a 16-7 lead. They stretched the advantage to 23-7 on their first drive of the second half when Klimek capped a 5-play 66 yard touchdown drive with a 14-yard TD run.

Springfield answered with a 14-play drive of its own. Rama snuck in the end zone from one yard out and then found senior wideout Nate Cain for the two-point conversion to make it a one-score game, 23-15, with 2:39 left in the third.

However, the Vikings’ responded quickly once again.

Kohler dumped it off to Klimek for a 22-yard touchdown on PV’s next drive to extend the Vikings’ lead to 30-15 with 11:09 left. Kohler’s 13-yard touchdown run with five minutes remaining put the contest out of reach.

“I think our tempo and the way we were moving the ball, we were a better conditioned team,” Kohler said on the key to PV’s offensive success. “Our offensive line did a great job up front and once they started clicking and we were wearing them down, that opened up everything and our defense put us in good positions to succeed.”

Kohler, a four-year starter for the Vikings, completed 12 of 22 passes for 152 yards and a touchdown. He added 11 carries for 64 yards and a pair of scores.

“I think (Kohler) seems pretty calm no matter what the situation is,” Springfield coach Chris Britton said. “He rolled out a couple times, got guys in his face and still had the presence to take a shot down the field.

“It comes with snaps. Four years of playing gets you a lot of snaps and you’ve seen a lot of things and it showed. He was a good answer to a lot of the stuff we were trying to do. He’s a good player and that’s a good team.”

Perk Valley will have four contests before it begins PAC Liberty play, and the Vikings hope Friday night’s victory is the first step in getting themselves ready for the league-opening showdown with Spring-Ford.

“It’s definitely big, especially after we lost our out-of-league games (due to the COVID shortened season),” Kohler said. “These are always big games for us to really get into the swing of things, and it’s definitely great to come out with a win. That will help us with momentum moving forward.”

NOTES >> Senior Sean Lohr ran eight times for 57 yards to lead the Springfield ground attack. When he went down with an injury, sophomore Ty Gougler rushed nine times for 46 yards. “I thought Sean, our first running back, did a great job and then he got injured,” Britton said. “Then the next guy up mentality. The next guy up (Gougler) came in and did exactly what he was supposed to do.” … Senior Rasheem Grayson followed Klimek and Kohler with nine rushes for 52 yards for PV. Senior Dawson Debebe caught three balls for 53 yards to lead the Vikings’ receivers. Junior Aidan Kreydt snagged two passes for 34 yards for the Cougars. … Carson Pascoe intercepted a pass for PV.