With revenge in mind, Unionville opens season with win over Avon Grove 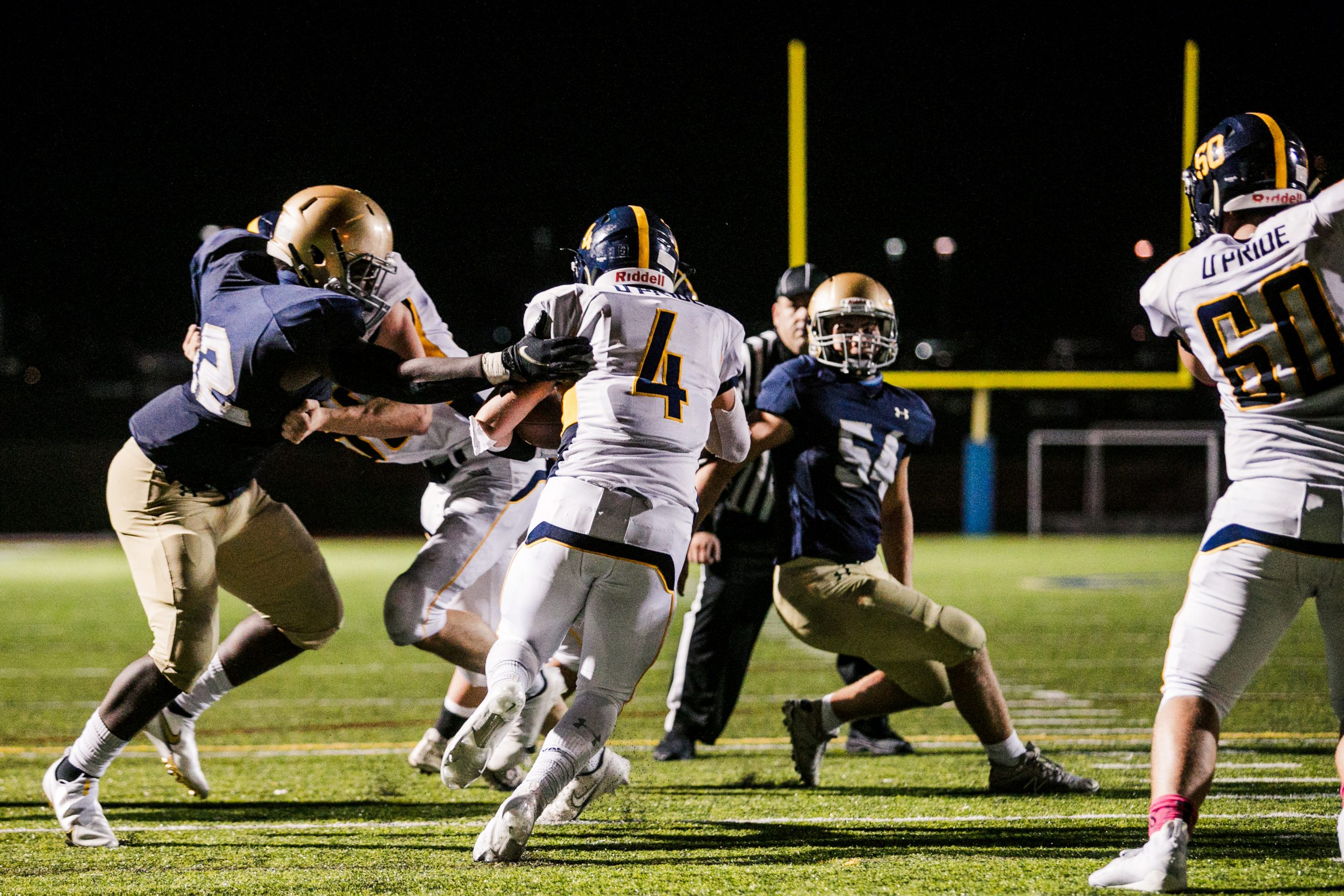 EAST MARLBOROUGH >> It took about 10 months, but the Unionville football squad avenged its only setback in a COVID-shortened 2020 season.

The Longhorns scored the first five touchdowns and opened the ’21 campaign with a forceful 35-7 triumph over visiting Avon Grove on a rainy Friday evening. And afterwards, the winning side acknowledged that the 21-point loss to the Red Devils late last October was on everybody’s mind.

“We’ve had this day circled on our calendar for a long time. They whipped us last year, so this was great revenge,” said senior runner Ethan Bennink, who scored three TDs.

“I didn’t have to mention it – they knew,” added head coach Pat Clark. “Our kids want to play to a certain standard, and tonight I thought we did that. For a first game we executed pretty well in most phases.”

With Bennick leading the way, the ’Horns outgained Avon Grove 209-50 on the ground. Unionville quarterback Matt McCloskey led all runners with 85 yards on five carries, including a touchdown.

“Matt is a great competitor,” Clark said of his senior signal caller. “He’ll do whatever it takes to help the team and I thought he was super poised. And anytime we get your quarterback into the run game, it helps us a lot.”

On the other side, the Devils shot themselves in the foot too many times to recover. There was a punt that went minus-two yards, a fumble that ended a long drive and an interception deep in their own territory.

“We did not execute,” said Avon Grove head coach Joe Coffey. “We gave (Unionville) short fields early on and even when we didn’t, we did not do a good job stopping them. That’s completely my fault.

“We need to get better. For whatever reason we weren’t ready to play and we compounded mistakes. And when we did have some opportunities, we didn’t execute.”

Despite some opening-game mistakes, the Longhorns dominated the first half to lead by three TDs. The negative-yard punt set the stage for Bennink’s first of two first half touchdown runs. A Matt D’Amico interception deep in Avon Grove territory preceded the second. McCloskey’s 46-yard keeper was the big play in a seven-play, 80-yard scoring drive to make it 21-0 just before halftime.

Unionville added two more scores on its first two possessions of the second half before calling off the dogs. McCloskey scrambled for a 27-yard score, and senior wideout Luke Schriver had two catches for a combined 65 yards to set up Bennick’s third trip to the end zone.

“We have a running back rotation this year and it takes a lot of pressure off of the individual,” Bennink said. “It also really helps when McCloskey can run the ball like that.”

Down 35-0, the Red Devils’ Anthony Lorusso scored in the waning minutes to avoid the shutout. He led Avon Grove with 53 rushing yards, but needed 16 carries to do it.

“We have a very experienced front seven, so I think that helped us to handle the run game. I thought we were very physical at the line of scrimmage,” Clark said.

“It was a team effort on defense,” added senior lineman Finn Muhly, who notched three tackles for loss on the day, including two sacks.

“It wasn’t perfect and we have a lot of work to do, but it was a great way to start the season.”

Bennink wound up with 78 yards on 11 carries and Schriver finished with six catches for 50 yards. The Longhorns, however, were penalized six times and fumbled three times in the first half.

“We got a little sloppy with the ball when it got wet and we took a few penalties,” Clark said. “Those are things we’ll work on and we’ll get better.”

Unionville will host rival West Chester Rustin next Friday in what is always a key Ches-Mont American contest.

“This was a great start, so bring on Rustin next week,” Clark added. “Unionville-Rustin is always a great ball game.”