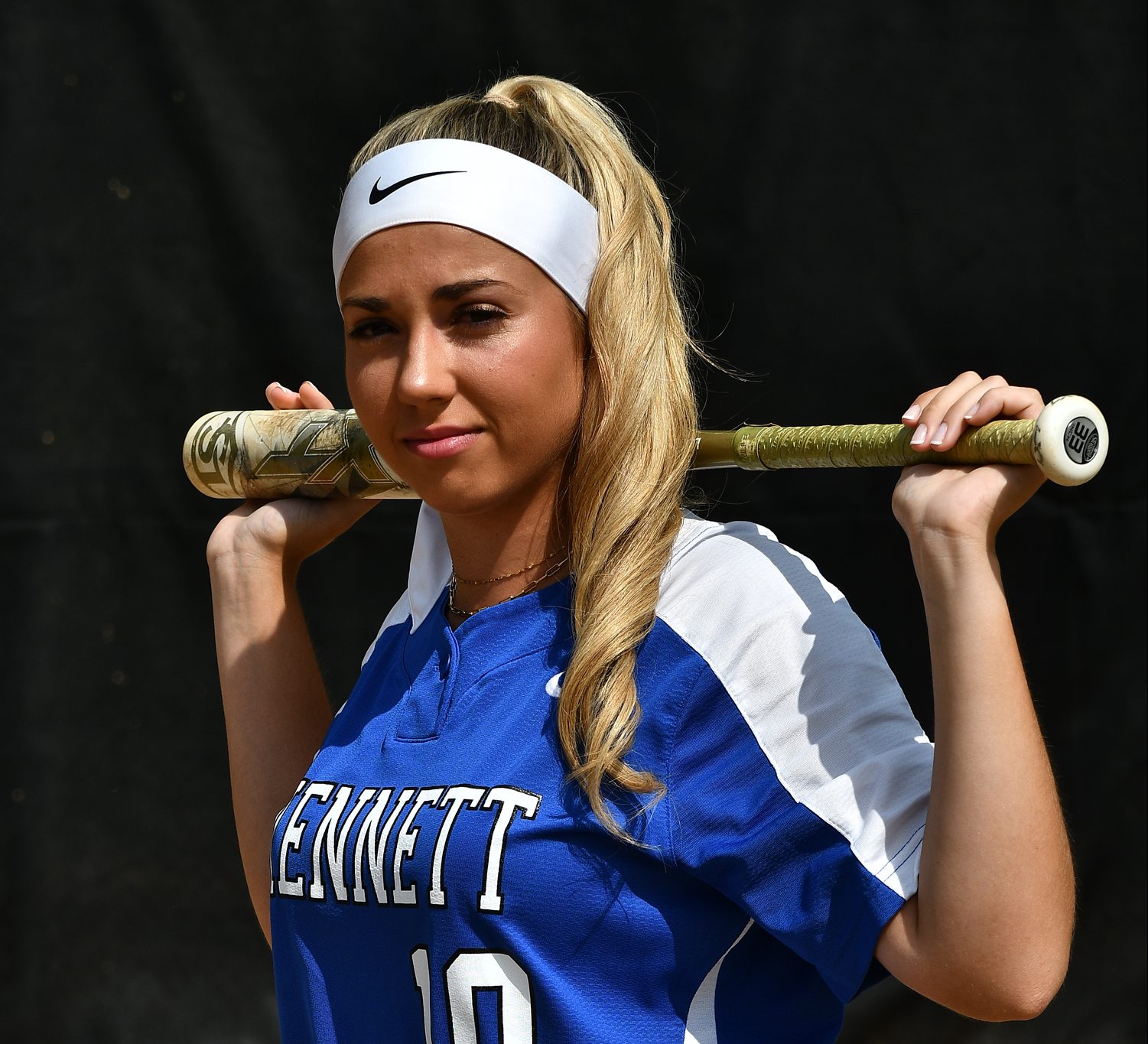 KENNETT SQUARE >> Chester County has a lot of really good softball players, many who would be an excellent selection as the area’s top player. But no player played a bigger part in her team’s success than Kennett’s Genevieve Ebaugh.

For her contributions with both her arm in the circle and with her bat on offense, Genevieve Ebaugh is the 2021 Daily Local News Softball Player of the Year.

Still just a junior, Ebaugh is already well-known for her pitching. This season Ebaugh put up some of the best numbers the county has ever seen, and this is an area that has seen some of the best hurlers in the state in recent years.

Ebaugh, who has been clocked as high as 67 MPH and regularly hits the mid 60s in games, struck out a whopping 318 hitters in 151.2 innings, while walking just 43. She had 12 games with 15 or more strikeouts, and whiffed a season high 20 in a no-hitter in the first round of districts. That no-no was one of five on the season, along with three one-hitters. Opponents hit just .129 against her as she posted an ERA of 1.15.

The Maryland recruit says that it comes down to speed and spin.

“When I am on and can mix and locate my pitches, it makes me really effective as a pitcher,” said Ebaugh. “My pitching coach (Earl Rutledge) has worked for years to help me get the spins down. He’s been such a big influence on me.”

Take away the eye-popping pitching numbers, and Ebaugh would still be in the discussion of the area’s top players. Generally hitting out of the number two hole, Ebaugh hit .484 for the season, with 30 base hits, including nine home runs and five other extra base hits, for a slugging percentage of 1.016 and an OPS of 1.606.

“I think I might have had three or four more home runs if all the fields we played on had fences,” joked Ebaugh.

Perhaps most impressively, Ebaugh had 29 runs scored, and 28 RBI, which means she either scored or knocked in nearly 60-percent of Kennett’s total runs for the season.

“I take a lot of pride in being a complete player,” said Ebaugh. “I do pitching lessons every week and hit at the fields several times a week. I also train several times per week for power and explosiveness.”

The Blue Demons’ star also stole 23 bases for the season. Base running is an underappreciated aspect of the game, but not for Ebaugh.

“Base running is my favorite part of the game,” said Ebaugh. “I have always loved to run the bases ever since I watched the movie 42. After that, I studied how Jackie Robinson ran the bases on film and have tried to incorporate that skill into my game.”

Ebaugh got her start in sports playing baseball with her brother, and switched over to softball at age eight when she joined her first travel team, the 10U DE Cobras. Her current club team is the Newtown Rock 18U Gold Garvey.

“It’s a great team with a bunch of amazing players,” said Ebaugh. “Really looking forward to our summer season which begins this week.”

Ebaugh has been working with Rutledge for about seven years now, and she credits her mentor for much of her success in the circle.

“He’s taught me everything I know about pitching and he’s always been so positive with me,” said Ebaugh. “I couldn’t have realized any of these goals without him and his guidance.”

Like any great athlete, Ebaugh knows there is always room for improvement.

“I need to work on being more consistent and efficient while pitching,” said Ebaugh. “The more consistent you are with your motion, the harder it is for batters to pick up pitches and the more efficient you can be while pitching allows you to go deeper in games, and with more pop in the later innings. A three- pitch inning is always the goal.”

Additional credit for her growth as an athlete goes to her personal trainer, Barry Swanson from Train Hard Win Big.

“He constantly pushes me at training to lift more, run faster and be more explosive,” said Ebaugh.

“I’ve always loved softball, and was lucky to be on some good travel teams along the way,” said Ebaugh. “I started going to college camps in seventh grade and realized I might have a chance to play at the next level. Then I really started to put a lot of time and energy into practicing and training to get bigger, stronger, faster.”

Ebaugh will indeed be playing at the next level, in the B1GTen, for the University of Maryland, where she’ll likely major inAgriculture and Business.

“I’ve always dreamed of playing in a power five conference, and Coach Mark Montgomery helped make that a reality last fall,” said Ebaugh. “I fell in love with the school the moment I stepped on campus. The school is beautiful, has awesome facilities, and great academics. The coaching staff has been great and can’t wait to join their team and help them win the Big 10 title.”

But first, Ebaugh will return for her senior year at Kennett, and hopes the Blue Demons can improve on the great season they had this year. Kennett finished tied with Rustin for the top record in the Ches-Mont American, then knocked off top-seeded Interboro in the district tournament before falling in an exciting extra innings game to eventual District 1, 5A champ West Chester East in the semis. The Blue Demons fell one win short of a state berth.

“We had a great season this year,” said Ebaugh. “Getting to states was one of our goals and although we didn’t get there this year, we’ll be back next year to achieve that goal. The coaches talked about that after our last game and we all know that’s the goal.”

Ebaugh wanted to be sure to give a shoutout to her team and coaches.

“The KTown squad made this a memorable season,” said Ebaugh. “We had field hockey players come out to help us field a team this year, seniors that came back out this year to help cover injuries, and all the younger players that had to learn a starting role quickly since we missed last year to COVID and the time for development. They all did a great job fitting into their roles and coming up with key plays at key points in a number of games this year. And Coach Gotti and Coach B guided us all the way.”

Sports have always been a part of life in Ebaugh’s family. Her brother, Charles, just graduated from KHS, and was the starting point guard on the boys’ basketball team. Her Mom, Anne, played college field hockey. And dad, Chris, ran track at the University of Delaware, and is now one of the Kennett softball coaches.

“Sometimes we battle but he knows me the best,” said Ebaugh. “He’s been there for me and sat through all the pitching lessons for many years to learn what to work on and call in the games. He knows my motion and pitches the best so it’s great to have someone like that in the dugout helping you out. He expects a lot out of me and pushes me to be my best.”