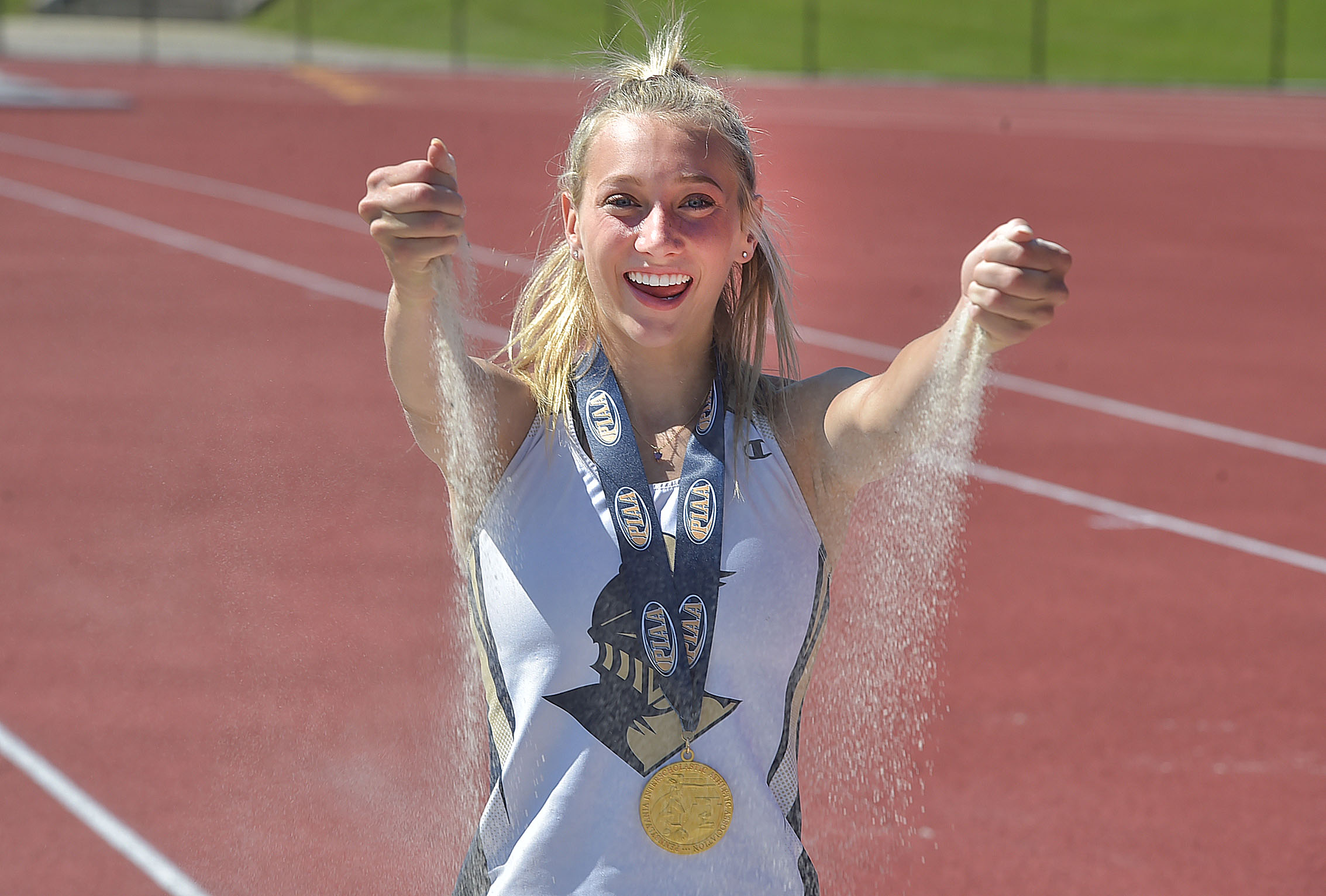 WESTTOWN >> When the Alexander family gathers, you can be sure that sports is topic number one. And after the track and field season Ava Alexander just had, the stories are becoming less nostalgic and more topical.

“There are so many athletes in my family,” said Alexander, who just wrapped up her sophomore year at West Chester Rustin. “Both of my grandparents were Division I athletes. My dad was an All-American swimmer and my mom played multiple sports in college.”

Alexander surprised everyone – including herself — in 2021 when she qualified for districts in five different events and went on to win the state crown in the triple jump. Ava is definitely the latest Alexander to make a splash in athletics, and at the age of 16 she is just getting started.

“It’s exciting,” said her coach Jim Collins. “Moving forward, it becomes more mental with Ava. She is going to get better, so now comes the pressure of being the returning state champ. She won’t be sneaking up on anybody.”

You can also add Daily Local News Girls’ Track Player of the Year to the list of accolades. Alexander is already one of the best jumpers in the state, but she’s also developing into a premier sprinter in everything from the 100 to 400.

“My coach said to me: ‘I don’t know if you are a jumper who sprints, or a sprinter who jumps,’” Alexander recalled. “And I’m still trying to figure it out. A few months ago I was a jumper, but now my running times are good too. Maybe I’m both.”

Her athleticism and versatility shouldn’t be a surprise. Alexander’s paternal grandfather, Harry Alexander, was a starter for the 1966 Notre Dame football team that won the national championship. Her dad, Harry, swam at Drexel, and her mom, Lisa, played lacrosse at Kutztown. And her brother, Tommy, plays baseball at Franklin & Marshall. How’s that for versatility?

“It’s always so much fun,” Ava said. “We are always outside playing sports. Having an athletic, sports-minded family is amazing.

“Our family is very close and when we get together, it’s all about sports. My Grandpa says, ‘let’s go to the track right now and do sprints.’”

Another amazing aspect of Alexander’s emergence is that she has been competing in the triple jump for just seven months. In fact, she first attempted a jump in the summer of 2020.

“When COVID hit, I started with it because I had so much time on my hands,” she explained. “I spent a lot of time learning the motions, phases and steps of it.

“I really can’t believe I got this far so quick. I was so horrible at first. I had no idea what I was doing. It took months for me to get down even the smallest things.”

As a freshman, Alexander showed great promise as a runner in the indoor season, but the outdoor season was cancelled due to the pandemic.

“Based on what we saw, we knew Ava was a superior talent, but she even exceeded expectations this year,” Collins said. “We didn’t see her getting to this level. It’s been quite a surprise.”

Needless to say, she made improvements by leaps and bounds (pun intended) in 2021. After helping the Golden Knights capture the program’s first American Division title, Alexander placed first at the Ches-Mont Championship in both the triple jump and long jump (personal best 17-10), and she anchored the 4×100 relay that took a silver medal.

“She is really capable of doing anything,” Collins added. “I wouldn’t be surprised if she could throw (discus, shot put) and we were tempted to put her in the high jump of the 2020 (outdoor) season would have happened.”

Alexander wound up setting District 1 qualifying standards in both jumping events, the relay, and in the 200 and 400. In her first-ever 400 at the Unionville Invitational, she took first place and broke the minute barrier.

“There aren’t too many kids who qualify for two or three events, let alone five,” Collins pointed out.

“It didn’t shock us. Maybe to the level she took it was a surprise, but we knew what she’s capable of and that she was going to be good in whatever we put her in.”

Alexander registered a personal best 38-111/4 to win the district crown in the triple jump, added a fifth in the long jump and was a member of the 4×100 team that placed fourth. The biggest challenge was trying to determine what events to enter.

“It’s hard because you don’t want to spread yourself too thin,” she said. “But I am still trying to figure out what my best running events are.”

At the PIAA Championship in late May it was pouring rain and the temperature hovered in the mid-50s. But Alexander went out and topped a field of 27 jumpers to win the triple jump with an opening effort of 38-9. The 4×100 team also grabbed seventh overall, and she placed 15th in the long jump while still in a daze from winning the triple jump.

“That was the proudest moment of my season,” she said. “It is still crazy to me. At the start of the outdoor season, I was only jumping 36 feet. But all of the sudden, it just rapidly kept going up and up.

“I was still in shock and they had to call my name on the loudspeaker because I was late to the long jump. I remember thinking, ‘I can’t believe I just won states.’ I was all over the place mentally.”

That brings us to Alexander’s growing reputation for training. Her daily routine includes two hours of weight lifting in the morning, and three hours of work on the track in the afternoon.

“Then go home, sleep, and then do it all over again. But I really love it,” she said.

“She trains non-stop,” Collins added. “She is just one of those kids that has a passion for track.

“Some athletes have the drive and some don’t, and that’s what separates them — if they are willing to commit.”

When asked to analyze Alexander’s success, Collins talks about “fast twitch muscles” and “kinesthetic awareness.” But he also explained that she is a very technical jumper, which is the result of a tremendous work ethic for training.

“To see the progress just makes me want to work harder to see what I can do,” Alexander said. “I know I can always do better. There is always room for improvement.”