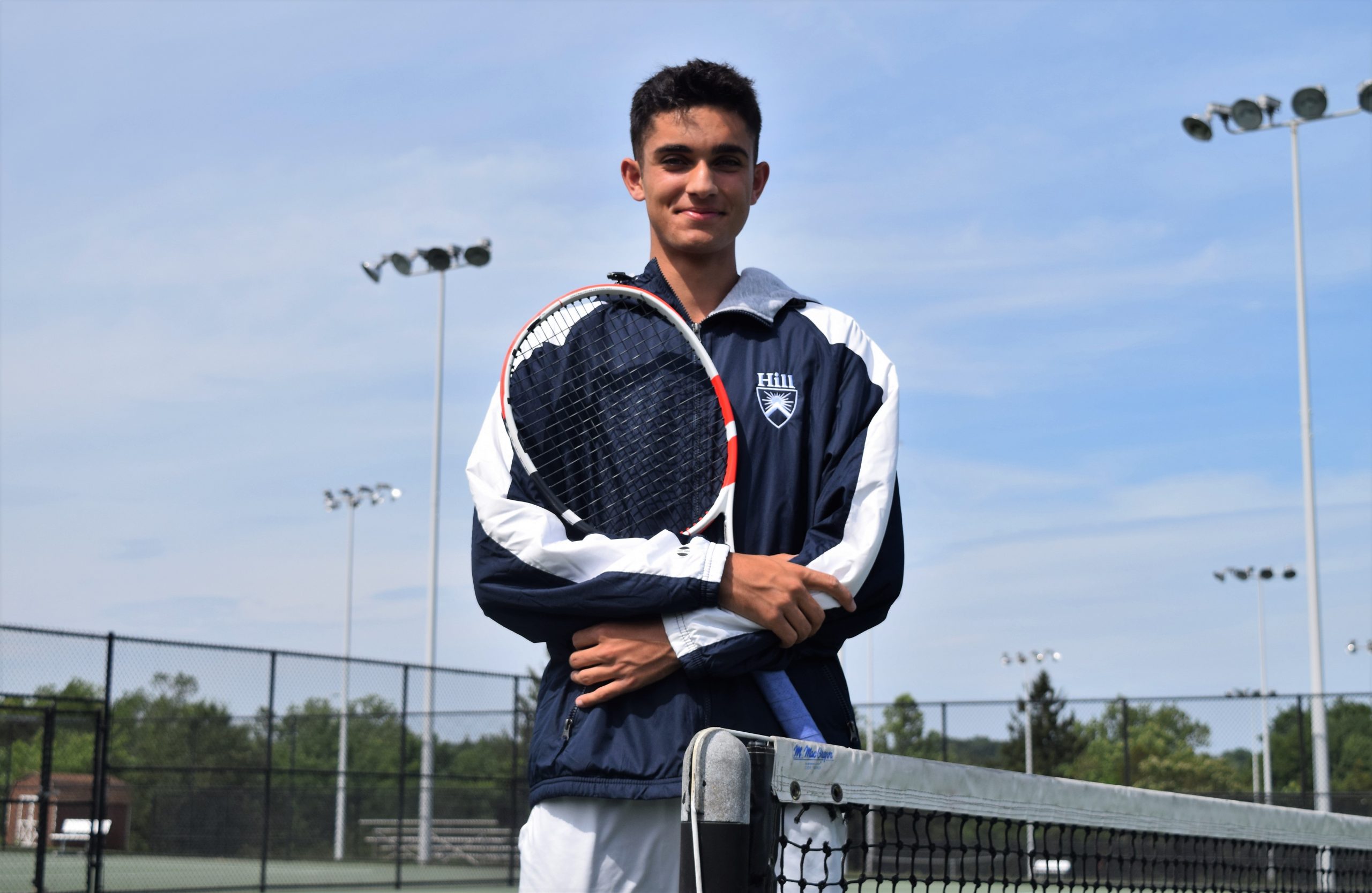 Dev Sharma could have tempered expectations for his junior tennis season at The Hill School in the spring.

In reality, Sharma played with very little while achieving the result he forecasted in an 11-0 season that included claiming the Mid-Atlantic Prep League singles championship, Hill’s first under the current individual tournament format. His results were also worthy of Mercury All-Area Player of the Year honors.

Sharma is the Blues’ first undefeated singles player since the 2002 season of Jeremiah Fuller, who went on to play at Wisconsin and Miami.

Sharma was Hill’s No. 2 singles player as a freshman and on course to play No. 1 in 2020 when the season was cancelled due to the COVID-19 pandemic.

It’s been a rapid rise for the Collegeville native who started in the sport at 8 and only committed to tennis at age 13 or 14.

There’s no other way to describe his commitment last summer at High Performance Tennis Academy in Bala Cynwyd.

“This past summer I trained every day for five hours. It was a camp style but practice, from 9 a.m. to 3 p.m. with an hour lunch break,” he said.

“(I became more passionate after) watching other players my age get better and realizing I have better skills and better strokes than all of them, but if I don’t train as much as them they’ll be better,” he said. “I found that competitive drive to want to be better and train more.”

Those long practice days were foundational considering the heavy restrictions in place at The Hill School to conduct in-person instruction during the pandemic. Boarding students had to remain on campus at all times and were tested weekly for COVID-19.

Hill had no fall sports season and the winter season was severely limited. Spring athletes were the first to have some semblance of a traditional athletics season since the winter of 2019-20.

The restrictions achieved the desired goal – the Hill community had just one COVID case all school year – but it was a challenge mentally for students and staff.

“It wasn’t the best for the mental well-being,” Sharma said.

“They did an amazing job, all the credit to them. The restrictions sucked and it played a big part in the mental (challenge) but it had to be done for the school’s main purpose, which is to educate the kids. The best way to educate kids is in person, not through a computer. The fact they were able to do it all year with only one COVID case, it was pretty remarkable.”

Unable to train at HPTA once he returned from H term in March, Sharma had to maintain his game within the confines of Hill campus life.

“I couldn’t play at all basically until the season,” he said.

Despite so many factors working against him, Sharma quickly took his place at the front of the Mid-Atlantic Prep League competition.

“All of them are good and respectable players, but against the competition we played there were about two players that really pushed me,” Sharma said. “That muscle memory I had from the summer was there. It carried over. And that muscle memory of wanting to win also carried over onto the court. My skills were just better.”

Sharma is an attacking player by nature with his 6-4 frame, powerful serve and weighty forehand as the anchors of his game.

“I’m a very big ball-striker so I want to hit big and then use finesse and touch to hit the winner or bring (the opponent) off the court to force the error,” he said.

He’s put in the work to improve his net play and movement in the past year.

“My movement hasn’t always been the best because I’m a tall, lanky guy,” he said. “I had to work on my movement. After a few weeks and doing a lot of ladder drills it became more natural. It became more fluid.”

Sharma was only tested by Mercersburg Academy’s Dylan Gantt and Blair Academy’s Marc Riera during the season but the third-year Hill student had a knack for coming through in the clutch in each match. Sharma edged Gantt in a super tiebreaker 6-2, 4-6, 10-4 on April 17. He bested Riera, of Spain, 7-6, 7-5, on April 21 and then again the MAPL tournament final, 6-4, 7-5, on May 15.

“Those matches where you have to outplay the opponent I enjoy,” Sharma said. “It brings me more confidence and I improve in those matches. When you’re playing against those better players you’re having to think on the court then you’re going to get better.”

Sharma is intent on making up for lost time this summer by playing junior tournaments and improving his rankings to where he feels they should be after surrendering tennis opportunities to attend school in person at Hill.

“(My goal is to) improve those rankings to make it show what I actually am and gain the interest of those college coaches,” he said. “The goal is to play Division I … or Division III. Academics always comes first because I don’t want to be a pro and pursue tennis outside of college so the academics of the school is much more important.”