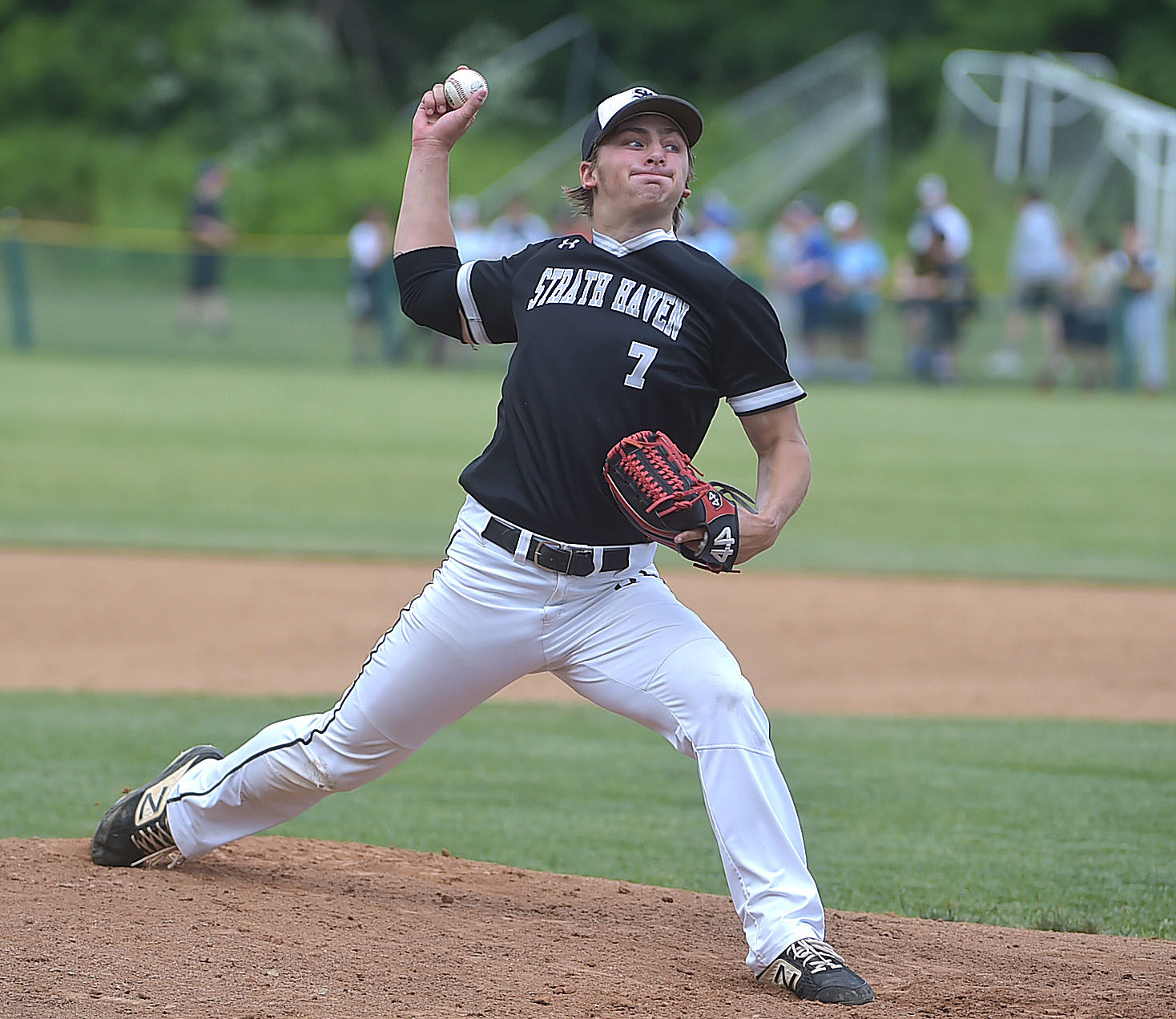 Strath Haven's Koll Peichel, pitching in the District 1 Class 5A final, worked into the seventh in the Panthers' 5-2 loss to Manheim Central in the PIAA opener Monday. (Pete Bannan/MediaNews Group)

The similarities end there, though. Strath Haven hitched its playoff wagon, as the District 1 champ has all season, to Koll Peichel, the fiery, demonstrative, muscular righty. Manheim Central’s answer was the antithesis, Colton Book, a calm, understated, lanky lefty.

Book won the battle Monday, and his Barons won the day.

Both starters tossed into the seventh inning, but Book prevented Strath Haven from building a big inning, leading the District 3 fifth-place team to a 5-2 win at Villanova Ballpark.

In a rare matchup of 20-win teams, the Barons (24-2) were just a little better. Book hit his pitch limit with two outs in the seventh, his team up 5-1. Haven (21-3) would force the tying run to the plate via Chris Felder’s RBI double. But the two runners stranded by reliever Wyatt Becker made nine Panthers for the day, including seven in the final five innings.

“(Book) threw well,” Haven catcher Marc DeCarlo said. “Our hits didn’t fall together. I think we put up just as many hits, but they weren’t clumped.”

Book scattered six hits in 6.2 innings, with two walks and five strikeouts. One of the runs the Stony Brook signee allowed was unearned.

“We knew they were scrappy, they put the ball in play,” Book said. “I was just trying to throw strikes, make them put it on the ground, throw groundballs, keep my pitch count down.”

Peichel’s 105-pitch limit came up with one out in the seventh, after Ky Watson singled. Reliever Brett Mutz got a diving play from Mike Valente at third for the second out. But he hit a batter, surrendered an RBI double to Book and then saw Cam Eberly crush a triple to dead center to chase home two and gain the first separation.

Peichel allowed four hits and walked three while striking out 12. Three errors hurt, with two unearned runs allowed. Where Book left the mound after jams with a stoic, head-down stride, Peichel’s histrionics were meant to spark his team’s bats, though that didn’t catch as early or as often as usual.

“It’s that little sparkplug,” DeCarlo said. “It gets everything going, but it’s also something we have to manage. As a team, we manage that together. That’s contagious, but it also keeps everyone in line, and we all work together.”

It took until the fifth inning for Strath Haven to break through. The Panthers had trailed from the top of the second on, when Brady Harbach led off with a double. Peichel appeared to work out of it until a grounder to second went through the wickets of Simon Bollinger.

DeCarlo got the run back in the fifth, his RBI single past a drawn-in infield scoring Sam Milligan.

“The whole year, we’ve really built off each other and we’ve tried to string hits right after another, pass the bat along,” Felder said. “This game, we really couldn’t do that.”

Had Milligan been erased on the basepaths, it would’ve continued a trend. Felder was thrown out at the plate by second baseman Riley McGallicher in the second after McGallicher booted a grounder but had the presence of mind to throw home to get Felder, trying to score from second. Felder, who had two hits, was then doubled off second in the fourth inning on a bloop caught over the shoulder by Eberly.

Manheim nudged ahead in the sixth. Eberly reached on a one-out error. A Harbach single moved him to third for pinch-hitter Trey Derck to loft a sac fly to center.

The insurance proved vital for the Barons, who advance to take on District 2 champ Abington Heights. While the season ends on a sour note for Strath Haven, it’s one DeMarco thinks won’t linger.

“I couldn’t ask for a better year,” he said. “We lost last year, and made a hell of a run this year.”