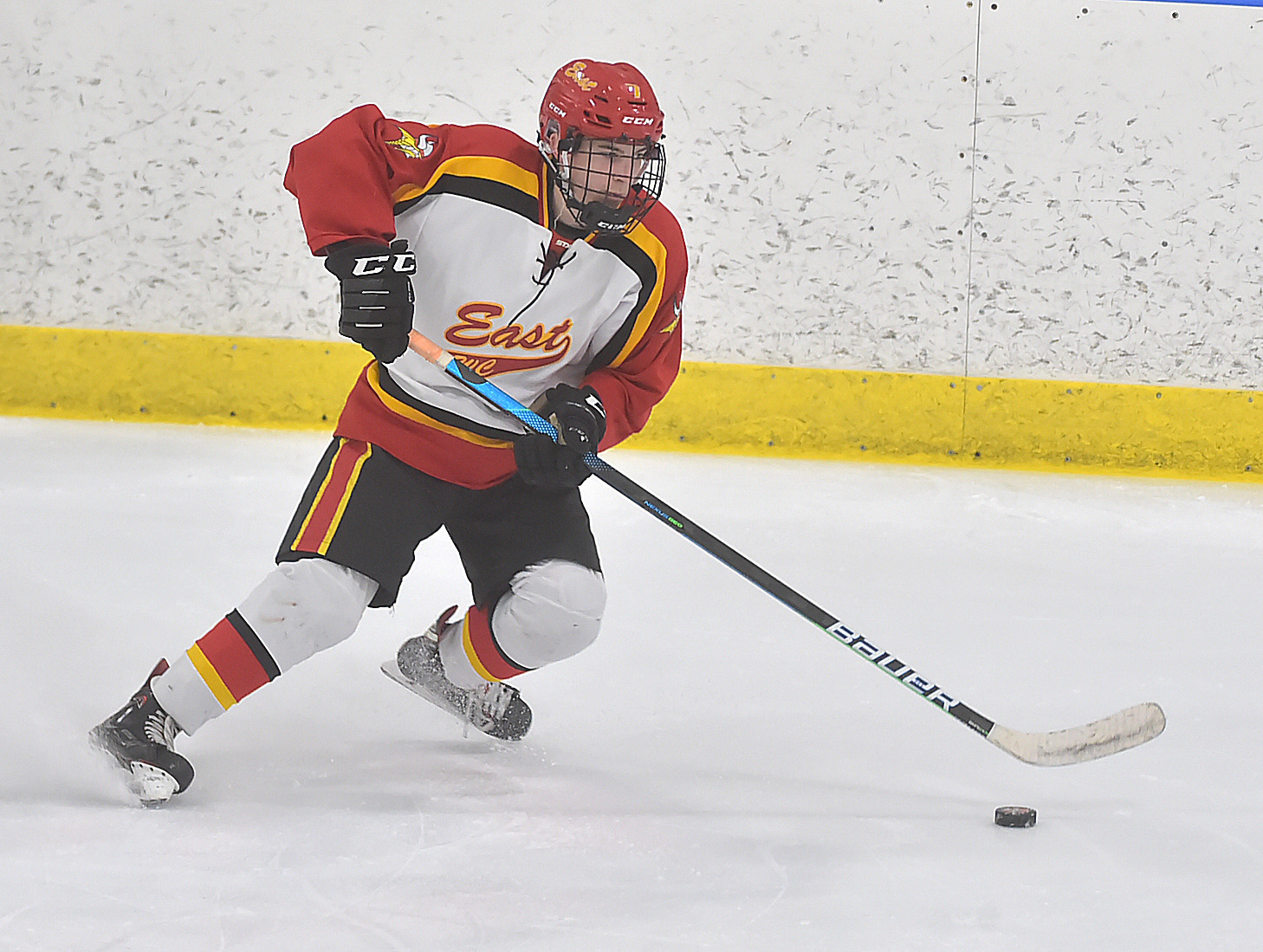 West Chester East’s depth was crucial in the Vikings’ 6-3 win against Indiana in the Pennsylvania Cup Class 1-A ice hockey state championship final Saturday at the UPMC Lemieux Sports Complex in Cranberry Township, just north of Pittsburgh.
“I noticed after the second period that Indiana looked a little winded,” said West Chester East head coach Eric Wolf, whose Vikings were trailing 3-2 after two periods. “So we went back to using four lines in the third quarter.”
West Chester East came alive early in the third period, scoring four times in a five-minute span.
It was the first state championship for the Vikings since 2013 – West Chester Rustin had won it every year since then. West Chester East won the state title in 2008 and 2013.
“I think we were a little tentative in the first two periods, but we found ourselves in the third period,” said Wolf, who is in his sixth year of coaching the Vikings. “Depth-wise, this is the best team I’ve ever had. It was a 20-man effort today.
“We went undefeated this season both in the Ches-Mont and in the post-season, which has never been done before on the Class A level.”
Indiana, the Penguins Cup champion, came into Saturday’s state championship final with an 18-0 regular-season record and was looking for its first state championship. West Chester East did not take the lead against Indiana until the third period.
Less than two minutes into the game, Indiana got on the board first with a goal from Ben Nettleton.
The Vikings’ Chase Becnel scored a power play goal (assisted by sophomore wing Greg Diamond) to tie the game at 1-1 with 2:59 to go in the first period.
Indiana went ahead 2-1 with 9:04 left in the second period on a goal by Ethan Agnello. Less than two minutes later West Chester senior forward Tristan D’Elia scored (assisted by second-year captain Joey Cardarelli) to tie the score at 2-2.
With 3:02 left in the second period, Indiana took its last lead of the game, 3-2, on an unassisted power play goal by Agnello.
Then came the Vikings’ four-goal onslaught within a period of five minutes and 15 seconds.
With 13:08 to play in the third period, West Chester East tied the score at 3-3 on a goal from Henry Thornton, assisted by Luca Touring and junior defender Michael Cardarelli.
Just 22 seconds later, the Vikings went ahead to stay as Becnel scored his second goal of the game (assisted by Thornton).
Michael Cardarelli scored a power play goal with 9:18 to play, assisted by John Conlon, to give West Chester East a 5-3 lead.
Just 85 seconds later, D’Elia scored his second goal of the game, assisted by Joey Cardarelli, to give the Vikings a 6-3 lead and wrap up the scoring for the game.
West Chester East enjoyed a 46-19 shots on goal advantage for the game. In the final period, the Vikings outshot Indiana 18-4.
Viking goalie Jake Godshall recorded 16 saves against Indiana.
“We had excellent goaltending today with Jake,” said Wolf. “Two of our defensive players, Henry Thornton and Michael Cardarelli, scored goals, Tristan and Chase scored twice … Really, I could name every player as having contributed to our victory today. It was a 20-man effort.
“Our team had great dedication to what we were doing throughout the season. Once they saw what was happening this season [undefeated Ches-Mont record], they make sure that there was no changing of that zero in the [league] loss column.
“This season was special, especially with all the stuff going on with COVID. With teams shutting down left and right, we never had to shut down.”
West Chester East 6, Indiana 3
West Chester East 1 1 4 – 6
Indiana                    1 2 0 – 3
West Chester East goals: D’Elia 2, Becnel 2, Thornton, M. Cardarelli.
Indiana goals: Agnello 2, Nettleton.
Goalie saves: Godshall (WCE) 16, O’Connor (IND) 40.