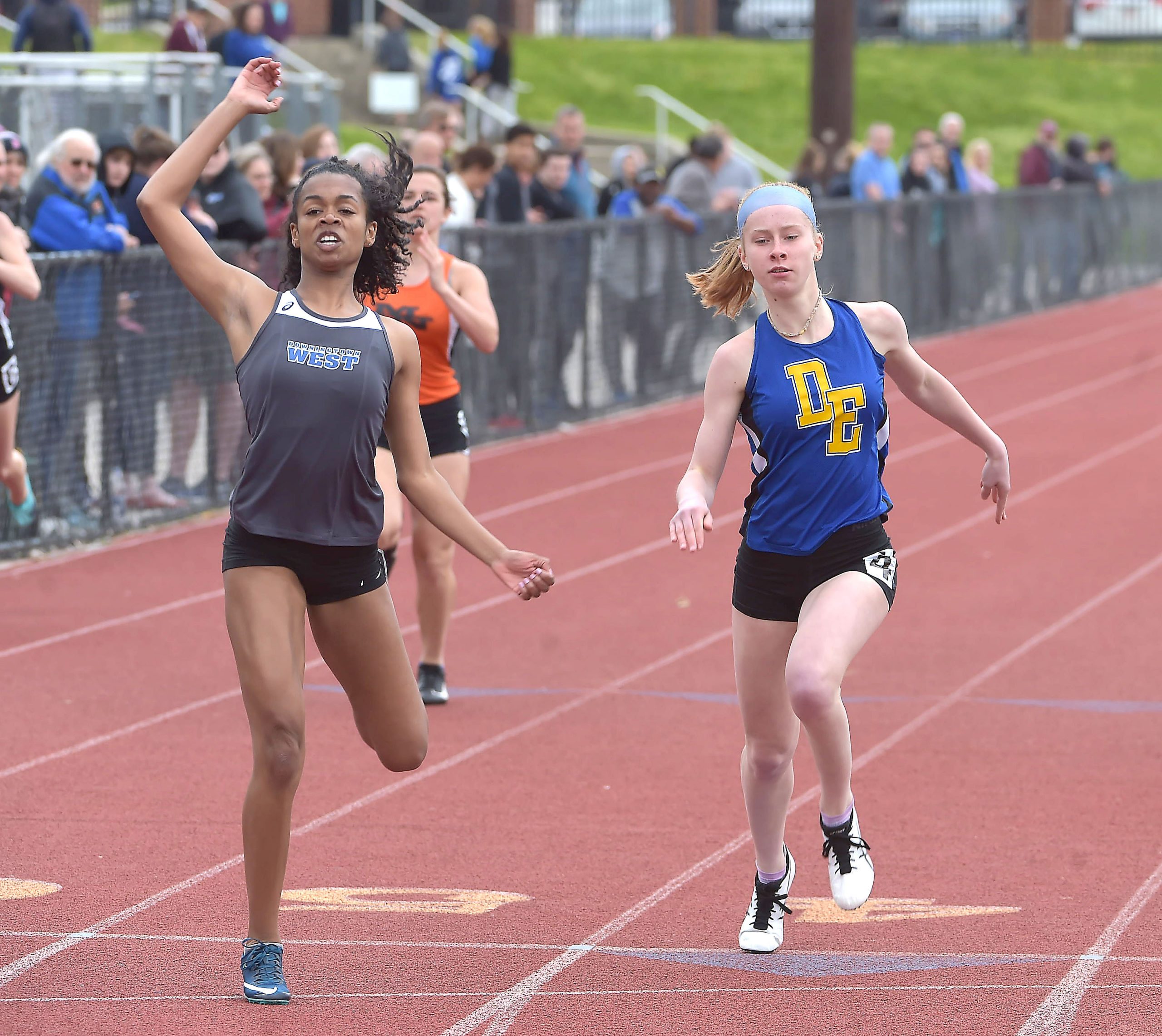 Downingtown West’s Maya Tucker, left, and Downingtown East’s Olivia Binns, right — here in 100 meter race at the 2019 Rustin Invitational — will be two of the sprinters to watch in the area this spring. (PETE BANNAN - MNG)

Chester County traditionally features a variety of talented track & field athletes – Coatesville finished second in the 2019 PIAA District 1 Class AAA track & field championships – and this spring should be no exception as Chesco athletes finally get to compete again after an absence of almost two years due to the COVID-19 pandemic.

Here’s an early-season look at how the Ches-Mont League high school girls track & field teams shape up this spring:

The Eagles’ jumpers and sprinters will be led by junior Ava Ceulers and senior Bridget Kelly. Ceulers’ long jump of 17’4.5” qualified her for the District Meet as a freshman in 2019. She also finished 11th in the 100-meter run (12.98) at the 2019 Ches-Mont League Championships. Kelly medaled in both the triple and long jumps at the 2019 Ches-Mont Championships. She owns personal bests of 16’6.5” in the long jump and 34’0.25” in the triple jump.

The distance team will be led junior Carlyn Segrave-Daly and freshman Meghan Willis. Segrave-Daly is coming off a solid winter track season where she medaled in each of her three races. Willis transitions from basketball to her inaugural high school track season. Willis was a middle school standout in the 800 meter run and the 1600 meter run, placing second in the 800 at the 2019 Philadelphia Archdiocese Meet in seventh grade with a time of 2:25.

“We have a young team this year,” said Coatesville head coach Rebecca Eberly.

The Cougars have a variety of athletes to watch this spring. In the sprints, head coach Darryl McCauley is hoping that juniors Olivia Binns and Melanie Taylor can qualify for Districts and is expecting a solid year from four-year team member Madison McEvoy. In the 400 meter run, sophomore Isis Young should have a fine season. The Cougars have a couple of promising relay teams in the 4×100 quartet of Katie Riley, Olivia Binns, Alexia Harris and Faith Fuqua, and the 4×400 foursome of Madison McEvoy, Melanie Taylor, Shravya Kundavaram and Charlotte Niedzielski. In the 800 meter run and 1600 meter run, freshman Madison Brown is coming off an excellent cross country season, along with senior Lara McDowell, juniors Keira Moser and Keira Morrin, and sophomore Andrea Delucca. D-East also has some promising athletes in the field events. “We are excited for our seniors Rylee Ericson and Chloe Baumann, and Giovanna Jennings-Scott to return to form in in the 300 hurdles,” said McCauley. “Giovanna should excel in both the long jump and high jump, along with senior Emily Shirk in the high jump. In the javelin, seniors Rachel Wertz and Natalie Sims should have an excellent year. And senior Jennifer Castillo will be competitive in the shot put.”

The Patriots return senior Julia Hoffritz and juniors Julia Dill and Gillian Yonce from Great Valley’s 2019 district qualifying 4×400 meter relay. Hoffritz will continue her track career at Dickinson College. Senior Siena Vestri, who will throw the discus and shot this spring, will be throwing for Bucknell University next year.

Kennett track coach John Ramagano noted, “This year the numbers for our track & field team are a bit down. We will have rostered 49 girls, all looking forward to having a season. The team will only have 10 seniors in the program [boys and girls combined].”

One key returning Blue Demon is sophomore pole vaulter Kirstin Hoffman. Last winter, Hoffman managed to break the school record four times in the pole vault and her season-ending height of 11’8” was fifth-best in Pennsylvania.

Other standout girls looking to make their mark in the 400 meter run, the 800 meter run and the relay events are sophomores Ella Burnham and Claire Harper, and juniors Kim Alvarez and Rhiannon Stewart.

The Hornets have a couple of solid returning seniors to watch this spring – Dani Kehs in the 800 meter run, and Rose Rowe in the hurdles.

The Longhorns have some versatile performers this spring. Meghan Hart, who posted a 12-0 mark in the pole vault – tied for third-best in Pennsylvania – will be a four-event athlete this spring in Unionville’s supermeet. Another versatile athlete is junior Orenda Lin, who clocked 27.34 in the 200 meter run as a freshman. Josie Cicchino clocked 2:21.78 in the open 800 meter run as a sophomore, and junior Alex Pancoast posted 35-11 in the shot put last winter, and 110-9 in the discus as a freshman.

The Vikings have a variety of talented runners to watch this spring, including junior Chinonye Moneme, senior Michaela Schiele, Sonia Piombino and senior Marguerite Greulich.

Piccone, a three-time state qualifier in cross country, had a great sophomore season on the track in 2019, qualifying for Districts in both the 800 meter run and 1600 meter run. During the winter season, she was ranked 20th in the state in the mile/1600 meter run, and in the top 30 in the 800 meter run. She is a University of Rohde Island commit.

Mattie had a promising indoor season as a sophomore thrower, as during the early part of the season, it looked like she would be able to qualify for districts in all three throwing events. She will look to do the same this year as the leader of the Golden Knights’ throwers.

Quinn, a strong, aggressive runner, had a promising (if injury-riddled) freshman track season, and was a big part of the Golden Knights’ relays during her sophomore indoor season. She is expected to have an important role in Rustin’s 4×400 and 4×800 relay teams this spring.

During her freshman indoor season, Alexander broke two school records – the long jump and 4×200 relay, and just missed qualifying for the state meet in the long jump. Last winter, she ranked in the top six in Pennsylvania in both the long jump and triple jump. She is considered a crucial piece to Rustin’s sprint relays this spring.

Two other sophomores to watch are Ellie Keefer and Keturah Darwon. Keefer just missed the indoor state meet as a freshman in what Rustin coach Jim Collins called the toughest 3000 meter field in recent memory, and was ranked third in Pennsylvania in the 3K at the end of the past winter track season. She also ran top 30 times in the mile run and 800 meter run early in the season. Darwon broke Rustin’s 60 meter hurdles record and was part of the school record-breaking performances in the 4×200 and 4×400 relays during the indoor season as a freshman. Collins said, “She appears to be our top sprinter and hurdler and we will lean on her speed in the relays as well.”

Here’s an early-season look at how the other Chester County girls high school track & field teams shape up this spring:

The Pioneers have a trio of good runners in junior Abby Klebe, junior Brynn Forge and senior Kat Walton, all of whom were part of Conestoga’s all-state 4×400 relay team at the 2020 PTFCA Indoor State Championships (the quartet finished eighth).

Walton, who has committed to run for Lafayette College, competes in the 800 meter run and 400 meter run, and was the second leg of Conestoga’s all-state 4×400 relay team, with a split of 59.67.

Junior high jumper Kristen Lavallee jumped 5’0” at the DVGTCA Meet of Champions in February 2020, a mark that ranked 36th overall in Pennsylvania.

Junior pole vaulter Bridget O’Mara posted a mark of 10’0” at the DVGTCA Meet of Champions in February 2020, a vault which ranked 51th overall in Pennsylvania.

The Hurricanes have several athletes looking to make their mark this spring.

Hurricane senior Dylan Miller was just a couple of seconds from the district qualifying mark in the open 800-meter run in 2019, although she did compete at Districts on the 4×800 relay. She has also been part of the 2019 indoor state 4×800 qualifying relay, and is looking to close out her high school career with a district qualifying time in the 800 meter run.

Caroline Bell, a junior, has been steadily improving every season in the 800 meter run and the mile run. She was part of the 2019 indoor 4×800 relay as a freshman.

Senior thrower Norah Bice, who has committed to the University of Tulane, is looking to qualify once again for Districts and hopefully States as well in discus and javelin. In 2019 she was a District 1 qualifier in both javelin and discus, just shy of earning a state qualifying spot in javelin.

Senior thrower Emma Woodcock, who has committed to Elon University, hopes to have her first shot at competing at the outdoor track and field championships. This is her only second year throwing as she has moved from previously playing softball to fully committing to throwing events her senior year. So far she has garnered a school record in the weight throw and hammer. She has also moved up steadily on Villa’s all-time shot put list. She is preparing to finish off her high school career qualifying for states in discus and potentially shot put.