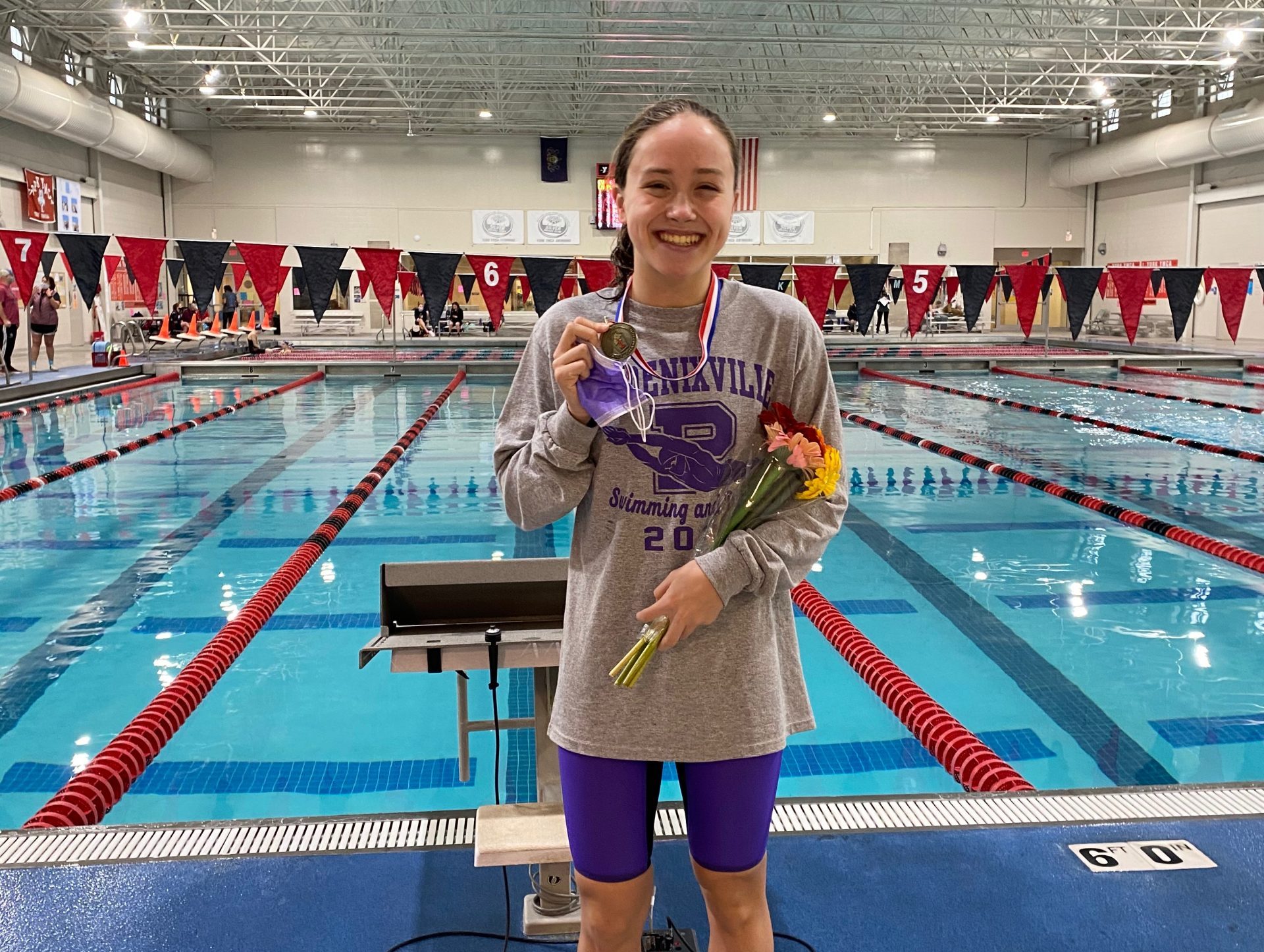 Phoenixville freshman Kenzie Padilla doesn’t know what a normal high school swim season looks like — just that 2020-21 was far from it.

Padilla, who hasn’t yet attended a high school class in person,  competed in an abridged cross country season for the Phantoms in the fall and had a long pause in December and early January to begin her first high school swim season, but she still found a way to make districts both times.

To cap an unusual winter, Padilla will have the opportunity to compete at her first state meet when she swims in the 100-yard butterfly of the PIAA Class 3A Championships at Cumberland Valley High School on Saturday morning.

“I’ve been so grateful,” Padilla said. “We’ve gotten so lucky to be able to have all these meets and experiences in a high school season that obviously isn’t normal. I haven’t gone to school. I’ve been in cyber school all year. It’s awesome that so many people were able to step up.

“It’s definitely been different from what I would have expected for my first high school season but it was still so fun.”

Only eight district champions and the next eight fastest times across Pennsylvania earned a trip to states. District 1 held its championship meet a week before the other districts across the state, so Padilla had to wait more than a week before finding out she qualified.

Padilla tracked times of the other district races on MeetMobile. Her mother, coaches and friends also kept tabs on what was happening elsewhere around the state, eventually determining her time was good enough to earn her first spot in the PIAA championships.

She enters the PIAA championships as the 10th seed in the 100 fly.

“It wasn’t actually too bad because states was sort of always an outside chance for me I guess,” Padilla said of the wait. “I was sixth at districts, and I knew there were a couple of people from other districts that were really good too so I knew I was going to be right on the edge of the top eight people to make it. I didn’t get too nervous about it. But I was really excited.”

Padilla got her first taste of postseason high school competition this fall when she competed for the Phantoms’ cross country team. She finished 27th a districts, two spots from earning a medal, and missed out on qualifying for a reduced state field.

“I’m just really excited,” said Padilla, who mentioned running kept her in shape when she couldn’t get in the pool this winter. “I’m just so happy to be there. I know it was extra hard to even make districts this year. I did cross country this fall, so I knew I had to get a good time.”

Phoenixville senior Erini Pappas is headed to states with Padilla. Pappas is a four-time PIAA qualifier who medaled as a freshman at states in 2017-18. She is seeded seventh in the 100 back (56.51).

Padilla is excited to have a teammate to go with her during her first state meet. She said Pappas and others have explained what the PIAA championships usually have in store at Bucknell University.

Like everything else this school year, Padilla knows it won’t be the same but she’s ready and eager nonetheless.

“I’ve heard that it’s usually a really fun meet with a ton of people and dancing and stuff,” Padilla said. “We obviously won’t have the same experience this year, but I still think it will be really fun and I’m excited.” The thing is Gutshall has yet to actually step up on one of the platforms.

At the 2020 District 1 Class 3A championships as a freshman, Gutshall earned an eighth place medal in the 50-yard freestyle that had her standing next to the podium rather than on top during the post-race celebration.

Gutshall came back to districts in 2021 and bettered her place, finishing fourth, but COVID precautions wiped a typical podium ceremony.

As she heads up to her second PIAA Class 3A championship on Friday, Gutshall hopes to have a chance to finally make the short post-race climb.

“It’s a running joke in my house that I still haven’t got on the podium,” Gutshall said. “So I’m really trying to get on the podium this year.”

Gutshall enters Saturday morning’s PIAA Class 3A championships seeded 11th in the 50 free after finishing fourth at districts with a time of 23.94.

The goal for Gutshall as a freshman was just to get to states as she tapered for the district meet. After swimming a 24.29 at the District 1 championships in 2020, she followed with a 24.57 at states.

This season the sophomore hopes to save her best for last.

“It’s kind of different for me this year because last year I tapered for districts instead of tapering for states,” Gutshall said. “It’s still different this year. Last year, I didn’t expect to do incredible because I wasn’t tapering anymore. This year, I’m just excited to be able to go and hopefully get a better time.”

In a 50-yard race that demands perfection, Gutshall knows she will have to be locked in.

“That one is definitely one you have to get excited for because it comes down to the 24 seconds that you’re in the pool,” Gutshall said. “You can’t really mess anything up. If you mess up your start or turn, the race is over. You’re not going to get a better time, so you just have to go into hoping to do everything perfectly.”