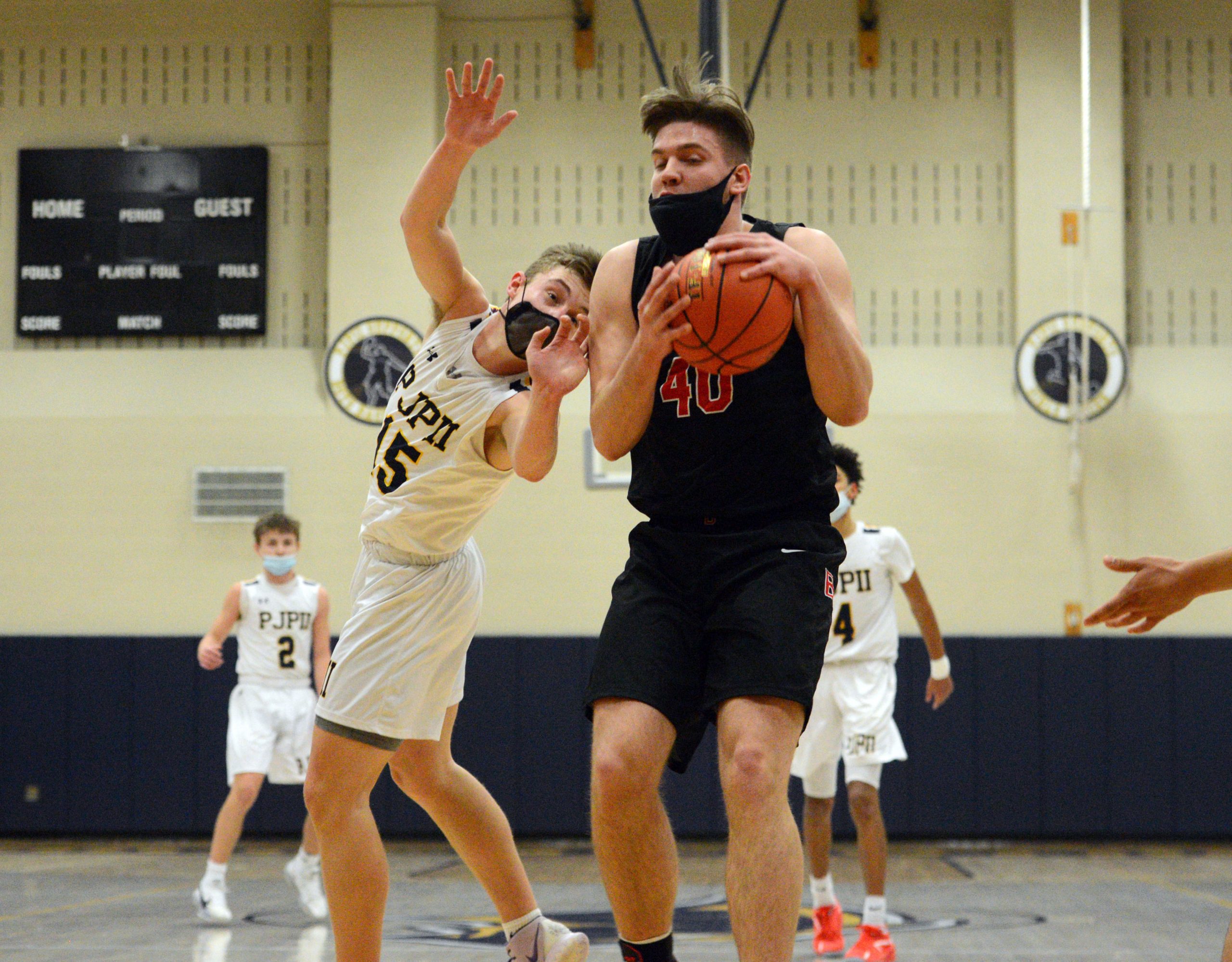 PJP had clinched its second Pioneer Athletic Conference title a day earlier, while the Bears’ spot in the District 1 Class 6A playoff was firmly intact.

That doesn’t mean the contest wasn’t important for both squads as the Golden Panthers carried an undefeated record into the contest and the Bears wanted their lone opportunity to topple the PAC’s best in a year without a league postseason.

Boyertown made the most of its chance.

The Bears overcame a double-digit deficit in the second half to walk away with a 58-55 victory and put an end to PJP’s bid for a perfect season.

“We’ve been waiting for this matchup for a long time after postponements, cancellations,” Boyertown senior Aarick Salata said. “We just wanted to get our fair shot at them. We did and we handled business tonight.”

Renninger got a friendly roll on a baseline jumper to give Boyertown a 51-50 lead with about two minutes to play. A minute later Salata dished to fellow senior Tre Diguglielmo (10 points) to extend the lead to 53-50.

Salata and Renninger each knocked down a pair of free throws down the stretch to seal the win, capping Boyertown’s regular season with a marquee victory.

“It was a big team game for us,” Renninger said. “They were obviously undefeated, a great team. We were trying to get that big dub against them and we came through as a team. … It’s definitely a great way to end the season.” That stretch included a 41-38 win against Methacton on Feb. 12, a 51-49 victory over Owen J. Roberts on Feb. 25 and a 57-53 victory over Upper Merion on Monday night that was a one-possession game in the final seconds.

The Golden Panthers’ last lead Tuesday came when Jaden Workman drove to the hoop to put his team ahead 50-49 with a little more than three minutes to play.

“Along the way, we’ve hit some big shots at the ends of games and just some things go your way,” PJP coach Brendan Stanton said. “I do believe that if you play hard and do stuff the right way, generally you do have some fortunate luck.

Baron, who finished with 13 first-half points, helped PJP to a 28-16 lead in the second quarter before the Bears cut the deficit to 34-27 at halftime. Baron hit his first triple after the break and Kevin Green added a bucket to put the Golden Panthers back up 12, 39-27, less than a minute into the third quarter.

After trailing twice by double digits, the Bears closed their deficit to two, 44-42, at the end of the third quarter when Leh found Renninger on an inbounds play to cap a 15-5 run. Salata gave Boyertown its first lead, 49-48, since the first quarter when he stole the ball and took it the other way for a score with 4:23 left in the game. Renninger’s bucket minutes later put the Bears up for good as they held on for the comeback win.

“We battled. All season we battled,” Salata said. “Down 12 points, it took a lot. We had to grind defensively. We had a lot of defensive mistakes in the first half, but we found out what it was at halftime, made the changes, made the adjustments and won the ball game.”

“I think we showed how we’re a family and we’ve been through adversity all year and find a way to get through,” Renninger said.

The Bears have since put together a five-game win streak that included their first season sweep of Spring-Ford since 2009-10. With Tuesday’s victory, they now have the lone win against the PAC’s league champ among their 2021 accomplishments.

“I think part of it was getting to know our personnel and getting to know where they can be successful,” Boyertown coach Mike Ludwig said. “While we have a bunch of guys who have played for a bunch of years, we still had five or six guys we were trying to mix in.

The Bears are hoping the win against the Golden Panthers isn’t their biggest of the season.

Tuesday’s victory pushed them up to No. 9 in the District 1 rankings for the time being, which would match them up with the No. 8 seed in the second round. Boyertown hosted a district playoff game as a No. 11 seed last season, falling to Plymouth Whitemarsh.

The Bears’ senior class, which also includes Chris Kiefer (six points) would like to end their careers with at least one district playoff win before they head out.

“It would be amazing,” said Salata, a four-year varsity player for the Bears. “That’s the goal. That’s what we’re working toward every day.”

PJP has one big game before then against Frontier rival Phoenixville on Thursday. They’ll hope to cap their PAC title year with a win before heading to the postseason.

“We won the first 13,” Stanton said. “We lost the first one tonight, and it happens. It’s all about responding to adversity, coming back tomorrow focused. … Just come in tomorrow with some positive energy and get ready to go Thursday. It’s a quick turnaround.”