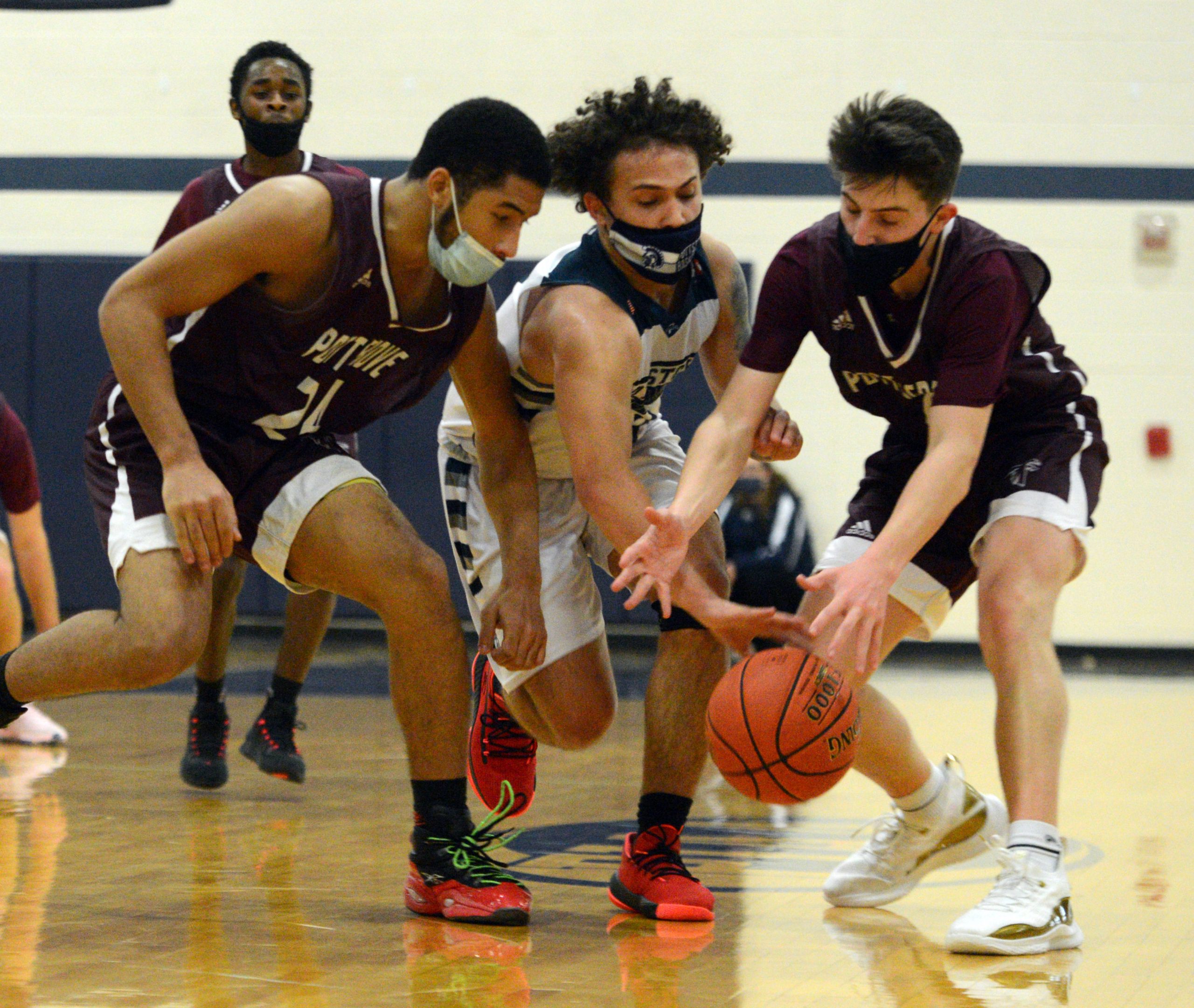 POTTSTOWN >> Pottstown’s boys basketball team can swing a game’s momentum in a hurry.

The Trojans’ pressure defense and transition offense has the ability to produce points in bunches. In their last few contests, the problem was Pottstown’s opponents did the same thing right back.

That was not the case Saturday against rival Pottsgrove as the Trojans rolled to a 65-33 victory, grabbing control in the second quarter and never letting the Falcons back in the game.

“It was a fun game,” Cottman said. “It was Senior Night, playing against our rival Pottsgrove. It don’t get no better than that.”

After trailing 15-9 at the end of the first, a 17-2 run gave Pottstown a 31-20 lead at halftime. Pottstown continued to roll after half, extending the lead to 49-25 by the end of the third quarter.

“At first it was a struggle in the beginning, so we had to trap and stuff, switch up the gameplay after that,” Smallwood said. “After a couple, steals and finishes we came back and got excited. … (Coach Scott Palladino) said keep the intensity and don’t stop because that’s what usually happens. We were up by a lot, but we didn’t get too comfortable like usual, so we stayed up.” Before Saturday’s game Pottstown honored seniors Smallwood, Cottman, Watson and Christian Albert, who ended the contest with a three-pointer that drew some loud cheers from the Pottstown fans and bench.

The Trojans picked a good one to honor their seniors as the win broke a three-game skid and marked their best offensive performance of the season as the 62 points were a season-high.

“We had a rough week,” Cottman said. “We haven’t had the best week, so we figured we’d just come out here and try our hardest.”

Pottstown leads 41-23 with 3:35 left in Q3. Corey Cottman with the oop to Darius Smallwood. pic.twitter.com/0KpYAhqxgC

Manny Allen’s seven first-quarter points sparked the Falcons to their early lead before the offense cooled in the second and third quarters. Pottstown’s press forced a handful of Pottsgrove miscues, holding the Falcons to five points apiece in both periods.

Allen and Shawn Majors both scored 10 points to lead Pottsgrove.

Pottsgrove plays Owen J. Roberts on Monday and Upper Perk on Tuesday before a rematch with the Trojans next Wednesday and a final PAC game against Pope John Paul II next Friday.

Pottstown ends its division slate with games against Phoenixville, PJP and Pottsgrove on Monday, Tuesday and Wednesday next week before ending its PAC schedule against Spring-Ford on March 1.

Pottsgrove coach Jack Flanagan equated this 2021 season to having a lot of tests (games) without much homework and time in the classroom (practice).

“I believe our effort was there and our execution may not have been what I like, but a lot of that comes out when you don’t have practice,” Flanagan said.”You’re trying to put your best foot forward every night and find creative or unusual ways to prepare.”