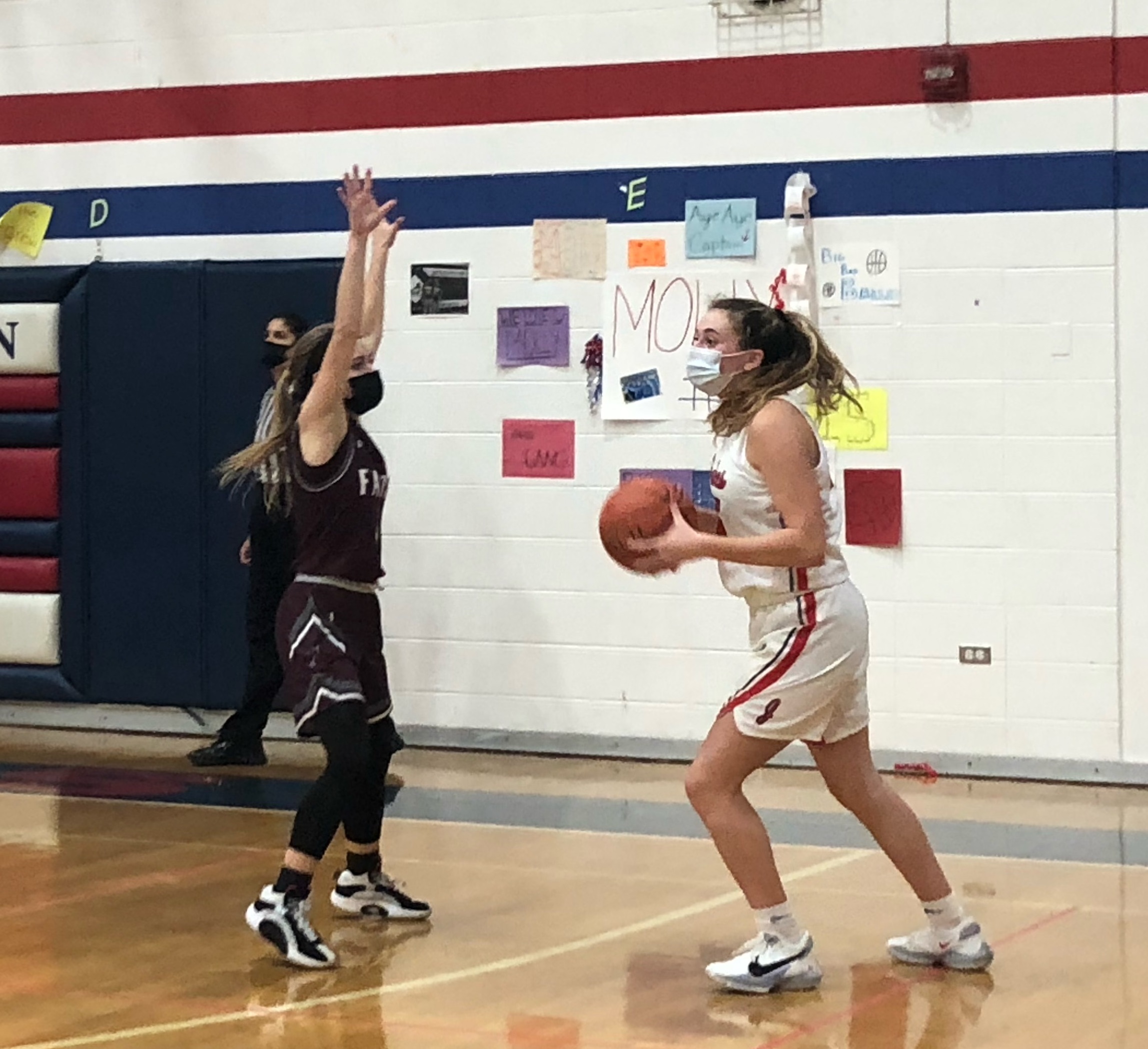 JENKINTOWN >> It’d be difficult to find a scenario the Jenkintown girls basketball team hasn’t seen over the past four years.

Even with visiting Faith Christian Academy all but shooting the lights out in the first quarter of a pivotal game Wednesday night, the Drakes never lost their cool. Instead, Jenkintown withstood the Lions’ barrage, shored up its defense, chipped into the lead and caught fire in the second half.

Stepping up on defense and sharing the wealth on offense, the Drakes topped the Lions 62-43 in a battle of the top two Class A teams in District 1.

“We’ve been playing together so long, we just have that chemistry in place,” Drakes senior guard Cady Westkaemper said. “We know to always look out for each other whenever we need it.”

The first meeting between the teams, back in January right at the start of the abbreviated season, saw Jenkintown claw out a 62-59 win in double overtime. Since then, the Drakes have been on an offensive roll but the Lions have come on strong as well, each building a firm grasp on the No. 1 and No. 2 spots respectively in the district power rankings.

Faith Christian (7-4) didn’t need long to get going offensively on Wednesday, racing out to a 10-4 lead and hitting a blistering 6-of-9 from behind the 3-point arc as they built a 22-13 lead after eight minutes. Joy Hissner led the barrage with three makes from behind the arc, including a corner trey that caught some backboard on its way down while Bella Forker hit a pair of treys and assisted three other baskets.

After the Lions’ scorching shooting, Jenkintown (9-1) abandoned its zone in favor of man-to-man defense and the change slowly started to pay off. Westkaemper shadowed Faith Christian’s stellar senior guard Sydney Heller while Carly Mulvaney had to try and contain Bella Forker.

Jenkintown basically rotated the hot hand on offense throughout the game. Mulvaney netted eight of the 13 first quarter points before senior Molly Walsh picked her up with 11 markers in the second quarter as the Drakes tried to whittle the lead down.

Faith Christian had a couple answers, but the Drakes got enough stops and thanks to Walsh’s shooting, the hosts closed within 31-26 at the break.

“These girls know what it’s all about, they don’t panic and just play our game,” veteran Drakes coach Jim Romano said. “(Faith) shot the eyes out of the basket in the first quarter, we had to come out of our 3-2 and we don’t sub a lot but these girls were not going to be denied tonight.”

“We all know what we do well at this point, just from playing together so long,” Mulvaney said. “We’re trying to get each other in the best places to score or be effective.”

Walsh and the Drakes stayed hot after halftime. The senior, who has committed to Hobart and William Smith Colleges, bracketed a pair of treys around a 3-pointer by Mulvaney to open the third quarter with a pair of Lauren Brockwell free throws capping the 11-0 run.

Forker and Heller combined for six straight to tie the game 37-37 but the Drakes used two defensive stops to spring outlet passes for a pair of layups and a 41-37 edge heading to the final quarter.

The teams exchanged a few baskets early in the final period, with a tough runner by Heller pulling the visitors within 46-43 with 6:16 on the clock. That would serve as Faith Christian’s final score of the night as Drakes junior Katie McGrath heated up in the role of closer.

“We play as a team, so we’re always trying to find the open girl and swing the ball around,” McGrath, the lone junior in the starting five, said. “We always seem to hit big threes when we need to. I thought it was a really nice second half we had as a team tonight.”

McGrath scored 12 of her game-high 19 points in the fourth quarter, including 10 straight for the Drakes that helped kick off the team’s 16-0 run to end the night.

With only the top two teams in the District 1 Class A rankings advancing to the postseason, there’s a likely chance the Drakes and Lions will meet for a third time in a few weeks. The first meeting went extra time and Wednesday’s final score didn’t show how close the contest was, so Faith Christian certainly wants another try at the five-time defending district champions.

Bella Forker finished with a team-high 14 points and chipped in 12 rebounds and five assists. Heller notched 12 points and three steals while Hissner went for 11 points.

“We can play with them, but we’re not going to be able to do that unless we execute,” David Forker said. “We know we have to play for four full quarters if we want to have a chance to beat them. They’re going to execute on both ends of the court so we have to do the same.”

Jenkintown has no designs of giving up that title, especially in a season where only district champions move on to states. This crop of seniors were freshmen when the program broke through to win its first state championship in 2018 and saw a promising 29-0 season ended prematurely due to the COVID-19 pandemic last season.

The shortened season may deny the Drakes a chance to extend their streak of 25-win campaigns but they’re more concerned about making a run at another state title.

“Because our season got cut short, we really wanted to go out on top this year,” Walsh said. “We never know what game may be our last, so we’re trying to leave it all out on the court.

“With districts and states coming up, we know what we have to do because we’ve been there before.”

Mulvaney, who netted her 1,000th point early this season and has committed to Catholic University, tied McGrath with 19 points and filled the rest of the stat sheet with 11 rebounds, six assists and three blocks. Walsh pulled down seven rebounds with two steals and Westkaemper chalked up four boards and four assists.

As a team, the Drakes assisted 14 of their 20 made field goals.

Jenkintown is one of the smallest high schools in the state, so the school community is tight-knit. The players have taken every challenge in stride, but admitted some aspects like the fact they’re exclusively doing virtual learning while in-season hasn’t been easy.

“It’s really hard, especially being online for school every day but it also makes practice that much better,” Mulvaney said. “It’s our time to separate from what’s going on in the world, it’s a chance to have fun, be with our friends and play basketball.”