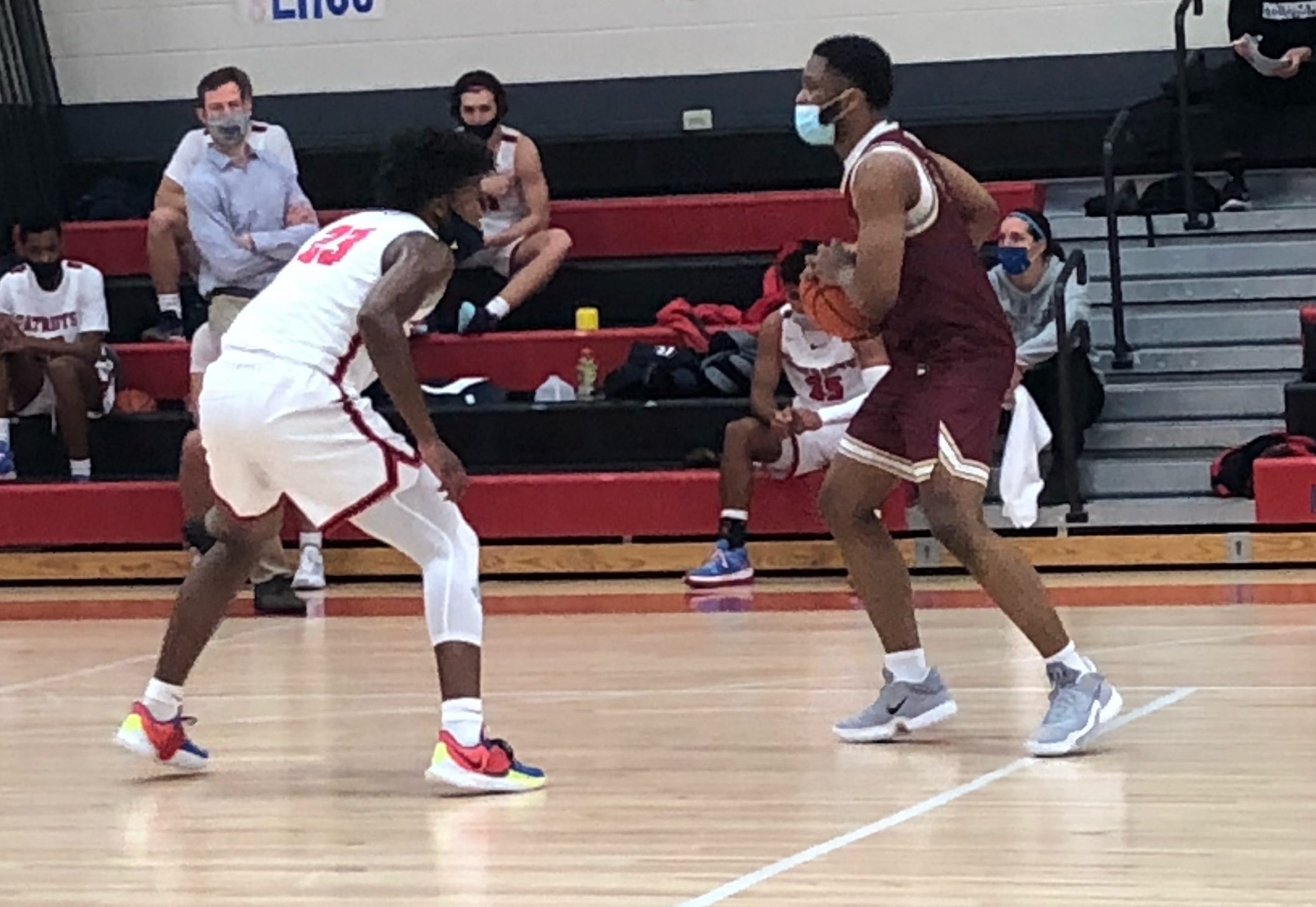 WHITEMARSH >> Nobody was going to complain about a little extra basketball.

With a scoring duel between standouts Jordan Longino and Jameel Brown at the center of a thriller, Germantown Academy and the Haverford School traded big play after big play from the late afternoon into the evening. The big names were rolling but the surrounding players were pretty strong too.

Thanks to an inspired effort from the supporting cast sparked by senior Dean Millard, GA outlasted the Fords 69-68 in a double overtime classic Tuesday.

“It was just that, I was trying to be a great teammate,” Millard said. “I’m there to play my role and support my teammates. They put up on their end for me every day, so I have to live up to my end. We work hard for this, we pride ourselves on defense and it was a great team win.”

Longino scored 31 points, his second straight 30-point effort and the 17th of his career and in the process jumped older brother Evan-Eric for second place all-time on the program’s scoring list. The Villanova-bound senior, also the reigning PA Sportswriters Class 4A Player of the Year, is just 39 points from passing Alvin Williams for top honors on the list.

Former GA coach Jim Fenerty once quipped that “with the last Longino, you have to score a lot of points for this program,” but for a while it seemed like Jordan Longino might not have a chance to finish what he started. With the Inter-Ac affording its member programs just one month to play games this winter, Longino was grateful for the opportunity to chase the record and was excited to let his brother know who ranked where in the family hierarchy now.

“It’s something I can tease him about, but I’ve been at GA since pre-K, so I watched Coach Fenerty, my brother come up and all the guys before him, Alvin, everything like that,” Longino said. “For my name to be in the conversation with those guys; it’s just a blessing and it just goes to my coaches and my teammates for believing in me.”

Brown, the Fords’ outstanding junior and a Purdue recruit, went shot-for-shot with Longino, scoring 29 points that included a couple of massively clutch 3-pointers from long range in the fourth quarter and extra time. He also had a lot of help from his teammates, especially big man Isiah Boyd who came off the bench to score 16 points that included seven crucial tallies in the fourth quarter.

Haverford School coach Bernie Rogers admitted while it was tough coming out on the wrong side, he felt his team brought the right effort and did a good job of playing to plan. Sometimes it’s a matter of a couple plays adding up in one team’s favor and on Tuesday, GA got more of them.

“We’re just trying to enjoy each moment,” Rogers said. “When your number is called, even if it’s just for a minute, embrace it and add something positive.”

GA led 13-9 after a quarter and when Haverford put extra emphasis into taking the ball out of Longino’s hands, Millard stepped up with nine points in the second as the Patriots built a 30-27 halftime lead. The Fords fell behind by 10 halfway through the third frame but closed on an 8-0 run to get within 41-39 heading to the fourth quarter.

Brown hit from way outside to put the Fords in front 53-50 with 2:48 left, but with the Inter-Ac adopting a 30-second shot clock this season, GA would have a few more possessions. Neither team could make a positive gain until the Patriots posted up Longino and he drew contact on a finish then sank the foul shot with 1:22 left to level the score 53-53 and neither team could capitalize on a last look before overtime.

“Both teams made big shots, neither team let the other one get away from them, those are the type of games that are tough because you know you left something on the table you could have finished,” Rogers said. “Jordan and Jameel are such focal points, you’re looking for the other guys to step up and take their opportunities.”

The Fords only had two players in double figures, but seven other guys tallied at least one basket as they contributions up and down the roster. GA’s scoring was a bit more concentrated, but the Patriots likewise got a strong team effort.

Jake Hsu scored 14 points, Millard finished with 12 and Luke Marvin provided a lift off the bench with 10 points. GA coach Matt Dolan also lauded his team’s defense, which relies on a lot of switches and something Longino chalked up to trust within the group.

“Coach Dolan is big on ‘next play,’ he always tells us to regroup, focus on the defensive and let that turn into offense,” Longino said. “Our team chemistry is great, it’s not just my show. We got guys that can put the ball in the basket, that’s why we closed this game out because these guys stayed aggressive on the defensive end and it let to offense.”

In the first extra period, Longino staked his team to a 58-53 lead but a pair of free throws by Zach Genther preceded a 3-pointer by Christian Clover that knotted things up with 1:19 left. Longino and Brown then traded big-moment treys and once again, a look at the buzzer didn’t go for GA to put four more minutes on the clock.

It wasn’t all that long ago where the two programs played a five overtime thriller in GA’s gym but Millard helped make sure things didn’t get that far. With his guys trailing 68-64, the 6-foot-3 wing swiped the ball and went all the way to the cup for a layup with 2:22 remaining.

“That play is a game-changing play,” Dolan said. “That’s what he does for us, he has a lot of skills but what he provides us at a top level is just how hard he plays. He’s just relentless with his effort and his motor and it wears off on our other guys.”

Millard wasn’t finished putting his handprints all over the game. After Longino hit two free throws with 9.6 left to go in front, the Patriots had to get one final stop.

A deflection on a drive gave the Fords the ball under GA’s basket with 1.9 to go, but Millard appeared on the pass in, knocking the ball out on the sideline with just 0.3 on the clock. Haverford couldn’t get a clean shot at the buzzer as the Patriots celebrated their hard-earned win.

“A theme for this team this year has been resilience,” Millard said. “It was us digging deep. We know not to take this season for granted, it was up in the air so we’re thankful to have the opportunity to play and that means giving our all and being grateful.

“We knew we had it in us, we knew how much we wanted to win. Haverford’s had our number for a couple years and they have great players so it was a good team win.”