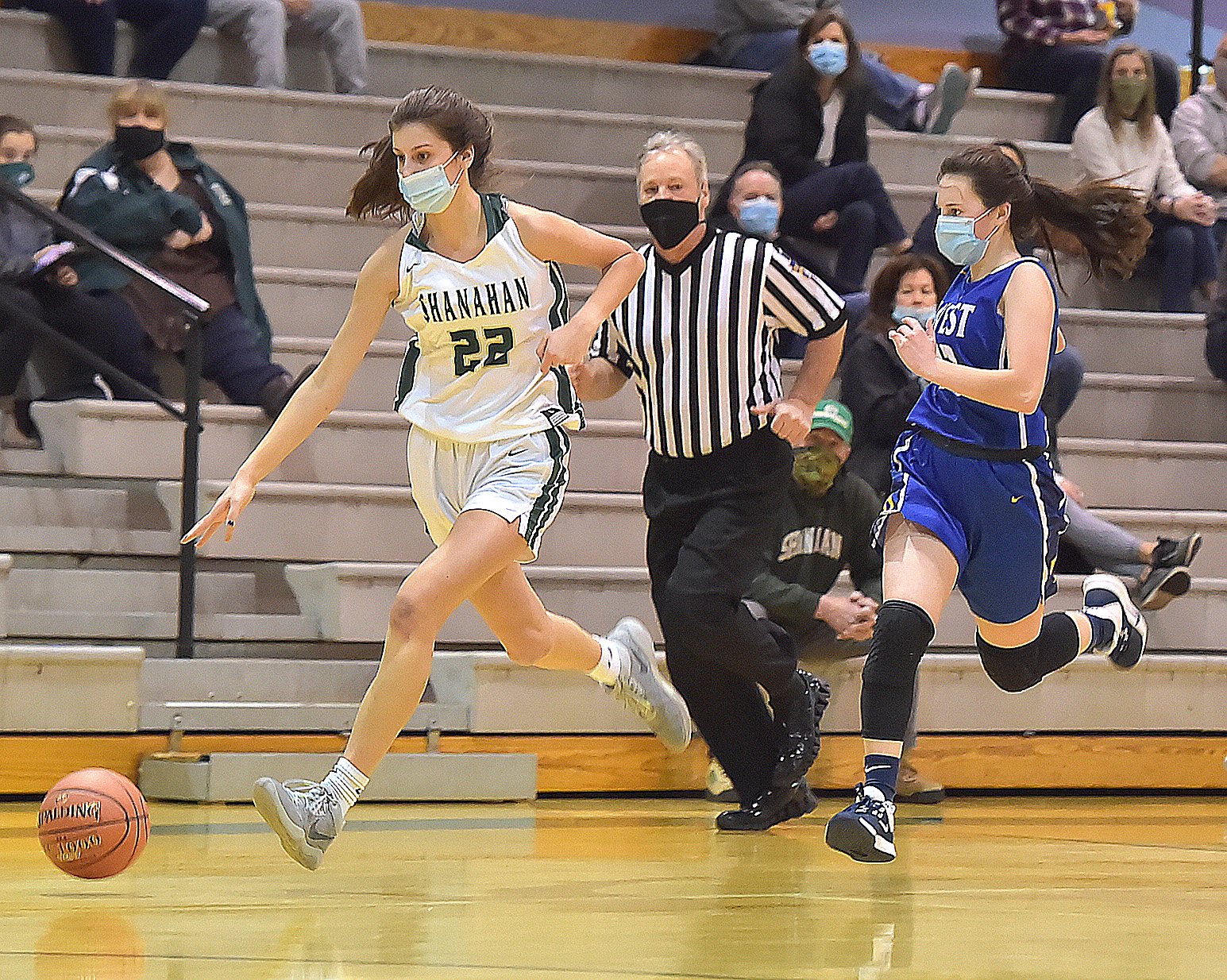 Bishop Shanahan’s (25) Shannon Donahue drives in the fourth quarter against Downingtown West. Shanahan came from behind to win 34-31.

Bishop Shanahan’s (12) Alyssa Brown puts a shot up in the fourth quarter against Downingtown West. Shanahan came from behind to win 34-31.

Bishop Shanahan’s (10) Caydence Oswald reaches in to steal a ball as Downingtown West’s (11) Jenna Young and (44) Shayla Johnson defend. Shanahan came from behind to win 34-31.

Downingtown West’s (43) Carmen McNamara goes to the net in the third quarter as Bishop Shanahan’s (40) Sammy Blumenthal. Shanahan came from behind to win 34-31.

Bishop Shanahan’s (22) Maddie Rudolph breaks up court in the third quarter against Downingtown West. Shanahan came from behind to win 34-31.

Bishop Shanahan’s (40) Sammy Blumenthal puts a shot up in the fourth quarter against Downingtown West. Shanahan came from behind to win 34-31.

DOWNINGTOWN >> It may have been the boldest coaching move of the season in local high school basketball.

Bishop Shanahan girls’ mentor Jim Powers decided his team needed a shakeup after coming off a pair of losses. So on Monday, he brought in five new underclass starters, and the group proceeded to knock off previously unbeaten Downingtown West, 34-31.

“We needed a jump start because we’ve been a little lackadaisical lately,” he pointed out.

“Changing the starting lineup sends a message to everybody. We may change it up again (Tuesday) against West Chester East. They don’t know, so they should be paying attention if they want to play.”

Playing time is the ultimate motivational tool available to coaches. And for Powers, it was an audacious move that paid off.

“It was a good bounce back,” Powers said. “It was good experience for the young kids. They’ve played with the starters and showed glimpses of what they can do. I just thought it was time to let them go together and see what they can do. I was happy with it.”

In addition to the new lineup, another motivational edge may have been with the home team. Three days earlier, Downingtown West eked out a one-point double overtime home win against the Eagles.

“This was really big, especially after losing to them Friday,” said one of the new starters, freshman forward Sammy Blumenthal. “That was a frustrating game so coming back made us want to work that much harder.”

It was the first varsity career start for Blumenthal and the rest: junior Maddie Rudolph and sophomores Caydence Oswald, Alyssa Brown and Alexa Bojko. And even though there were some youthful mistakes in the first half, the group settled in and combined to score 15 of the Eagles 20 points in the second half.

It is also a scrappy group on defense, and the Whippets managed just 13 points and four made field goals in the second half against Shanahan.

“We found out right before the game,” Blumenthal said. “I think it was better for me because I probably would have over-thought stuff.”

The win keeps the Eagles in contention for the Ches-Mont National race at 6-2 (7-3 overall). Downingtown West falls to 5-1 and falls into a first place tie with rival Downingtown East in the loss column.

“Despite the loss today I am really proud of them,” said Whippets head coach Mike Young.

“This group really worked hard in the offseason individually because we really couldn’t do much as a team. They’ve kind of bought in to how we want to play and things we want to do.”

Deadlocked at 24-all early in the final period, Shanahan staged a game-altering 8-0 run on a series of aggressive moves to the basket. Blumenthal started things with an inside bucket and dropped 3-4 from the foul line. Then previous starter Shannon Donahue came off the bench to deliver a big driving bucket and a foul shot to give the Eagles a 32-24 lead with 3:09 to go.

“It is a scrappy group of kids,” Powers said. “They work hard. If they can build off of this, who knows what can happen.

“They were a little nervous early in the game because (West) is very good finishing around the bucket. Maybe they had to get through that first half to understand that they can play at this level. They settled in better in the second half. They made some shots, got to the basket and forced the issue.”

The Whippets tried to stage a comeback, and scored seven of the last nine points, but never got closer than three.

“Some shots we made Friday didn’t go down this time,” Young said.

“We just had trouble scoring in the second half. We were uncharacteristic with some turnovers and trying to force some things that weren’t there. And in a tight game like that, it comes back to get you.”

The Whippets led just about all of the first half, and used their own 8-0 run in the second quarter to take an 18-14 lead into the break. Shanahan committed 12 turnovers in the first two quarters, but just one the rest of the way.

“We just need to keep playing together, focus on ourselves, and play hard,” said Blumenthal, who paced the Eagles with nine points.

A standout in volleyball, Rudolph chipped in eight points for Shanahan.

“The ones we started are some of our hardest working kids,” Powers said.

“We had to change something. We just played (West) Friday and it didn’t go the way I thought it should have gone as far as effort.”

West turned the ball over a total of 18 times, and 11 came in the second half. Senior center Shayla Johnson led the way with 11 points and sophomore Cameron McNamara added eight.

The Whippets are in the midst of what Young called a brutal stretch. They play at Downingtown East on Wednesday, then at West Chester East on Thursday and at West Chester Henderson on Saturday.

“You have to get used to that this season,” he said. “We were shut down for a while (due to COVID-19) and our schedule is kind of crazy. It’s like an NBA schedule: four this week and four next week.

But a lot of teams are in this same situation, so you have to roll with it.”