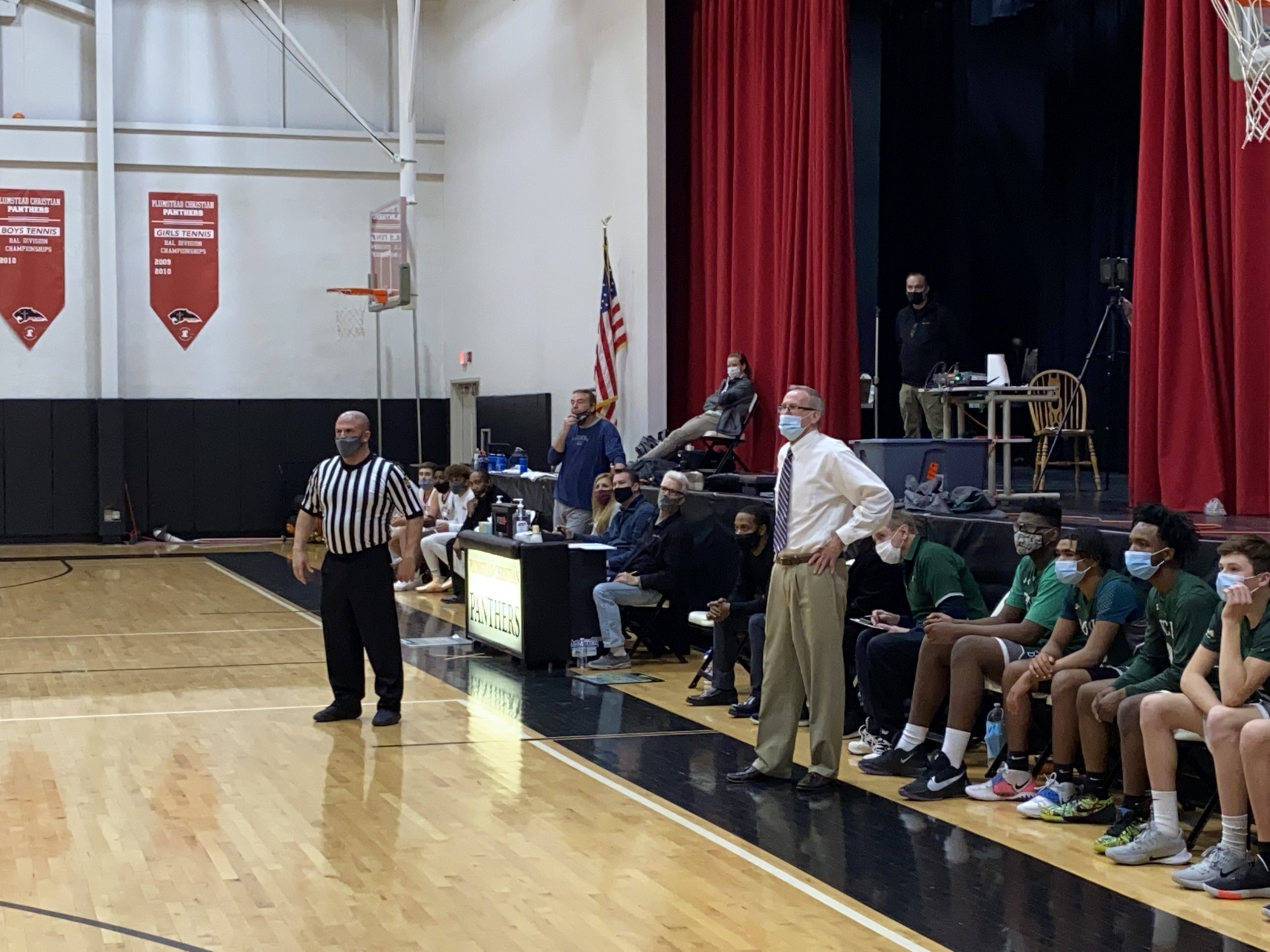 Dock Mennonite Mike Fergus stands in front of the Pioneers' bench during their game against Plumstead Christian on Friday, Jan. 29, 2021. (Mike Cabrey/MediaNews Group)

“I feel like it’s that Grateful Dead song – what a long, strange trip it’s been,” he said. “That’s all I can say. It’s just the way the cards worked out. So it has been a strange but enjoyable trip.”

Friday night, Fergus earned his 100th victory at Dock Mennonite – the fourth different high school he has reached the century win mark at – as the Pioneers boys basketball team improved its defense after a slow start against host Plumstead Christian, took the lead late in the third quarter then held on in the fourth for a 53-46 Bicentennial Athletic League win.

“I’m happy about it and the fact that we got 100 wins at four different schools. I like that, cause all four schools are totally different,” said Fergus, who has been coaching for 44 years, 39 of those as a high school head coach. “So it means that I’ve had good kids that will listen to me and let me help them at all those places and Dock is just, I love the kids at Dock, they’re just a continuation of that.”

Senior Steve Martin scored a game-high 21 points – nine in the first quarter, his last eight in the fourth as the Pioneers (3-2, 3-0 BAL) won their third straight.

“He’s always had a scorer’s mentality,” said Fergus of Martin. “He’s kind of a streaky shooter but he’s a got a mid-range game, he’s got a three-ball and he can finish a layup but what I’m most proud of about Steve is his defense. In the past if he were missing shots, it would affect his defense. But he doesn’t do that and he plays hard all the time on the defensive end. So that was pretty much a typical game from him.”

Nathan Lapp collected eight of 11 points in the second half while Roman Kuhn added all nine of his points in the third  – hitting three 3-pointers to spark an 11-2 run to start the quarter, turning a 29-25 halftime deficit into a 36-31 lead.

“In the back of my head I knew we weren’t scoring well. I just had to shoot,” Kuhn said. “Sometimes you just got to take over, shoot the ball, build your confidence up. You hit one then you keep shooting.”

Plumstead Christian (5-5, 1-4) knotted things at 36 but a Martin layup gave Dock the lead for good while two Lapp free throws increasing the advantage to 40-36 entering the fourth.

A Jackson Mott basket pulled PCS within two only for Dock to answer with an 8-2 burst – Martin scoring six during the run including the last four, his layup after a Lapp steal putting the Pioneers up 48-40 with 4:20 remaining.

Nicolas Phillipps’ 3-pointer had the Panthers down 48-43 but that was close as the home side would get.

“We’re basically a young team – we have to learn as we go,” Fergus said. “And we haven’t had enough practice – every coach is going to say so – we haven’t had enough practices, we got new kids, it’s just a learning [process] and the games are learning processes too and as a coach I’m learning things about my players in the game so it’s a weird kind of scenario. I was proud of them the way they came out and guarded in the second half. They played Dock defense in the second half.”

Fergus, who also reached 100 wins at Robert E. Lee in Houston, Texas, State College (coaching both boys and girls teams) and North Penn – 171 victories in 12 seasons with the Knights – has built Dock into one of the BAL’s top programs and after Friday stands 100-66 in his seventh season with the Pioneers.

“He’s been a great coach even before I came, he’s built the program up, since every season has been a better winning season,” said Kuhn of Fergus. “And he just really set good values for us.”

Dock won at least 16 games the previous four years with 24 wins in both in 2017-18 and 2019-220. The Pioneers reached the PIAA tournament three of past four seasons, last year winning the District 1-2A title and advancing to the state quarterfinals – a game Dock did not get to play as COVID-19 cancelled the rest of the hoops postseason.

“We’ve built a good program here and we’ve been state-ranked the last three years and we’ll see where it goes this year,” said Fergus, who now has 589 career wins. “It’s been such a crazy year but I’m just thankful I’m at Dock, I love it at Dock.”

Mott paced Plumstead Christian with 19 points but the Pioneers held him to just four points after halftime. Phillipps scored 13 points for the Panthers – eight in the fourth.

“We started forcing them all left,” said Fergus of Dock’s defense. “Put them all to their weak hand and guarded the ball screen better and we switched assignments. We put Steve Martin on 23 [Jackson Mott] who had 15 at halftime, I don’t know what he ended up with. Well, Steve did a much better job with him and we just tried to get more solid in the half court, we didn’t press as much.”

Mott scored six points as the Panthers jumped out to an 11-2 lead. Plumstead Christian again was up nine after two Matt Shiel free throws made it 13-4 at 55 but Dock capped the first quarter with a 7-1 run. Martin’s three-point play off his steal made it 13-9 with 40.6 seconds. The Dock senior then sliced between two defenders for a basket in the lane, getting the Pioneers within 14-11 after eight minutes of play.

A Martin jumper tied the game at 18 in the second quarter but Mott connected on a three to make it 21-18 and PCS held the lead the rest of the half. Zach Knudsen’s two free throws with 50.7 seconds gave the Lions a 29-25 edge at the break.

Dock started the third with five straight points – Kuhn’s 3-pointer giving the Pioneers their first lead of the night at 30-29. After two from Mott, Kuhn drained another three to make it 33-31 Dock. The junior missed on a try for a third straight trey but a Lapp offensive rebound gave him another chance from beyond the arc and he buried it for a 36-31 lead.

“Honestly, I was wide open so I was like I’m going to shoot this one again,” Kuhn said.

Plumstead Christian collected the next five with Shiel’s two free throws at 1:52 tying the game at 36. However, a Martin basket gave Dock a lead it never relinquished while Lapp’s two from the line at 1:05 made it 40-36.

Martin then provided six points during the Pioneers’ 8-2 run in the fourth – his last two in transition after a Lapp steal near the sideline for a 48-40 lead. Two Martin free throws with 15.1 seconds gave Dock its biggest advantage at 53-44.