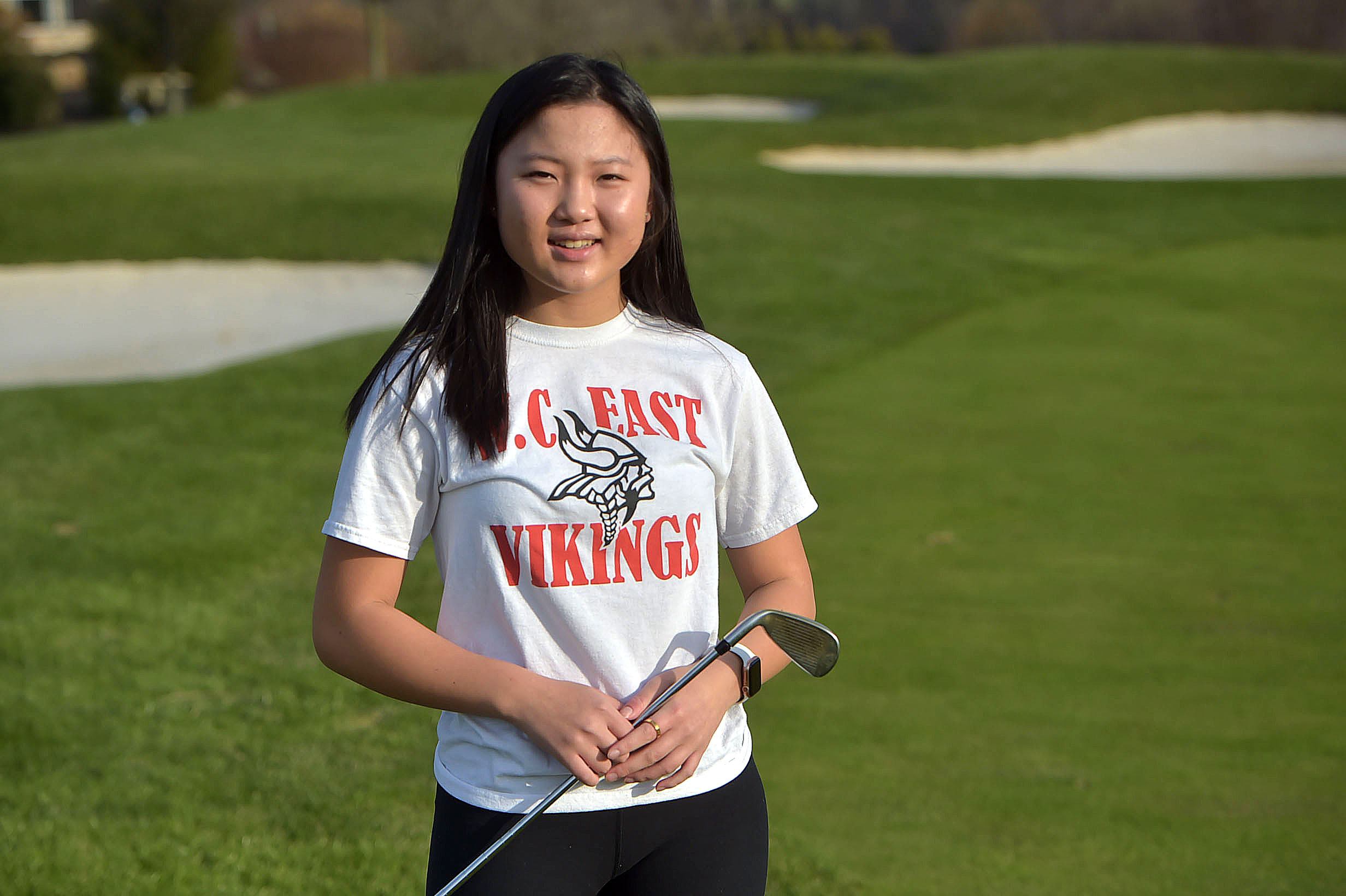 West Chester East junior Victoria Kim, the 2020 Daily Local News All-Area Girls Golfer of the Year, is developing a reputation as a cool customer under pressure.

Needing a birdie on the final hole of her round to get into a playoff for first place at the PIAA Class AAA girls’ state individual golf championship Oct. 20, Kim came through with a 3 on the par-4 9th hole (she had started her round at No. 10) at the Heritage Hills Golf Course at York with a drive, a wedge and a 5-foot putt.

Then, on the first hole of the playoff against Emmaus’ Michelle Cox, Kim nearly holed a chip shot for an eagle and holed a tricky 3-footer for the winning birdie and the PIAA state title.

“Victoria has ice water in her veins,” said West Chester East golf coach Todd Lorback. “She just never lets a round get away from her – she just grinds away and stays close to par. “With the PIAA’s format for the [2020] individual championships having been altered for COVID, golfers had just one round to play rather than the normal 36 hole, two day competition. That put a greater premium on literally every shot and putt that day. Victoria had one hole – the final hole in regulation – to draw even with the leader by getting a birdie and she did it. That was just another testament to Victoria’s impressive ability to perform under pressure and make shots when she has to.”

Kim said, “Although it may have seemed that I was calm at States this year, inside I was very nervous. Michelle [Cox] is a great player, with whom I have played in multiple tournaments, so I knew I needed to play well to win the playoff. One thing that has helped me hide my nervousness is the experience I have gained from playing with the best players across the country. In bigger tournaments, I play with a lot of great girls from all over the country, so I have gained experience maintaining calm under pressure.

“At States this year, I had some great conversations with the girls I played with. Because of them, I was able to have a lot of fun, and the conversations we had helped loosen the competitive energy.”

This is the second year in a row Kim has been named the Daily Local News All-Area Girls Golfer of the Year. In 2019, she tied for first place at the PIAA Class AAA state individual girls championships, then finished second in the ensuing three-way playoff.

In the 2020 sudden-death playoff at States, Kim birdied the first hole, the par 5 18th. She started it off with a long drive, then hit a pitching wedge to the left fringe of the green. Kim then chipped with a 56 degree wedge and nearly holed it, the ball hitting the edge of the cup before lipping out. The resulting three-foot putt was no gimme, as it broke to the left, but Kim read the break correctly, and the ball dropped into the cup.

“When I saw the [final] putt go in, my first feeling was one of relief,” said Kim. “On that last putt, I’d had some three-footers earlier that broke a little bit, just like this one.

“It was a steady round. My drives were really good – I hit only one drive off-line. The course was a little shorter than normal – about 5,600 yards – so I was hitting a lot of wedges and I missed some birdie putts.”

Kim believes the strongest part of her game is driving.

“I can depend on my driver to hit the ball where I want while also covering a good distance,” said Kim. “I’ve [particularly] been working on my ball contact and course management. I am not the best ball-striker, but I am working to not only be more consistent but also add more versatility to my game.”

“Putting is something that challenges yet calms me,” said Kim. “The aspect of putting is very simple but very hard to perfect. Full swings are fun as well, but being able to work on small details of a slow, easy stroke is just something that draws me to it. I love the idea that anyone has the possibility of becoming a great putter.”

While the COVID-19 pandemic changed the 2020 tournament schedules of many golfers (including Kim), she believes that worked to her advantage.

“Although the pandemic changed my tournament schedule a bit, it actually was very beneficial to my game,” said Kim. “I got a lot more practice time that I wouldn’t normally have gotten during the year. Instead of a busy schedule from school and tournaments, I was really able to focus on my swing and course management.”

Off the golf course, one of Kim’s favorite extracurricular activities at West Chester East is DECA (Distributive Education Clubs of America), a business club that focuses on enhancing leadership and business skills within students.

“My favorite part of DECA is the collaborative environment and the experience to be creative,” said Kim. “In the club, we go to a lot of competitions and do role-playing activities and tests for a chance to place within the competition.”