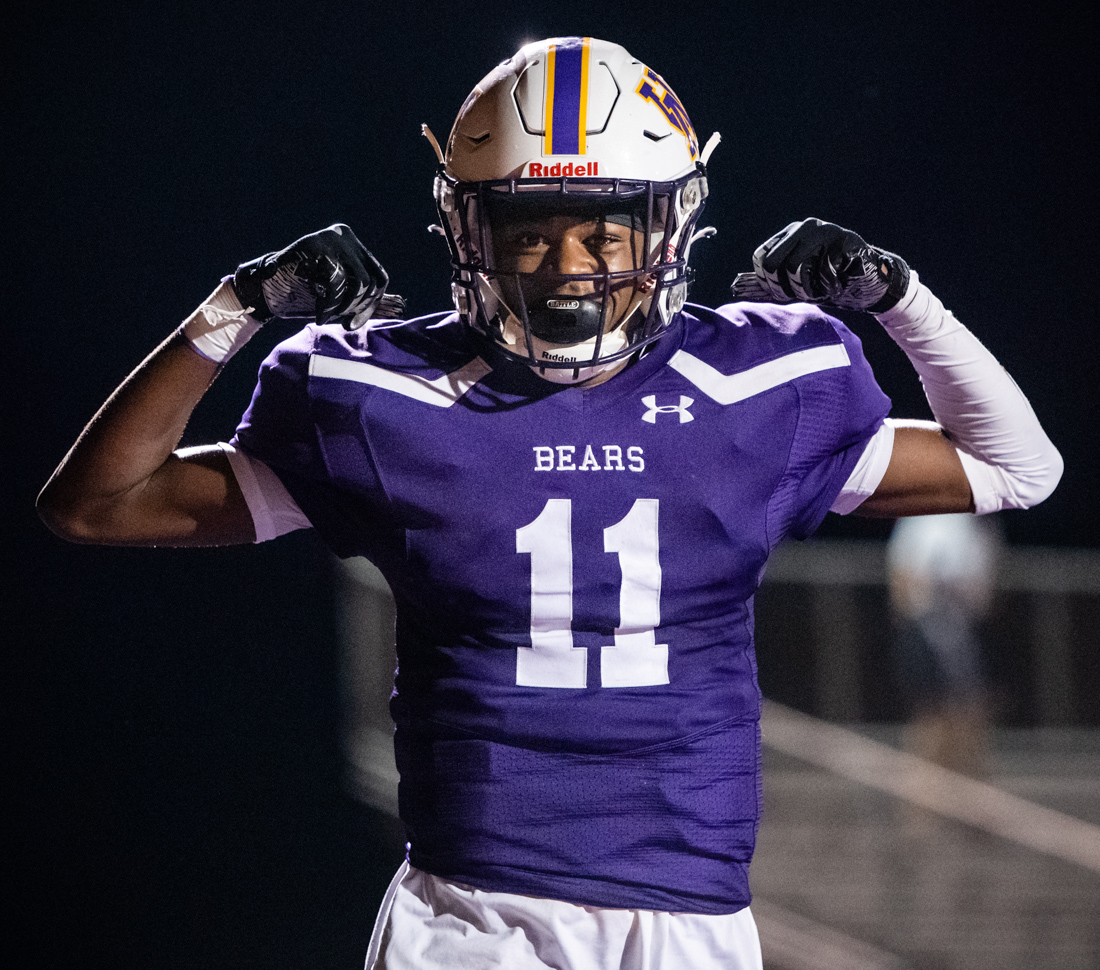 Upper Moreland's Jahaire Johnson (11) hams it up for the camera after scoring a touchdown against Archbishop Ryan in a game from November 6, 2020. (James Beaver/For MediaNews Group)

Upper Moreland improved in 2019, finishing just below .500 and reaching the District 1-4A championship game after going 3-7 in 2018. That momentum carried to 2020, when the Golden Bears won the Suburban One League American Conference and reached the PIAA-4A state quarterfinals.

Upper Moreland went 5-2 this fall with a perfect 4-0 record in the SOL American. They represented District 1 in the state playoffs and won a state game before coming up one point short of reaching the final four.

The Golden Bears landed a number of players on the Reporter/Times Herald/Montgomery Media 2020 All-Area teams. Running back Cameryn Jackson, wide receiver Jahaire Johnson and offensive lineman Ryan Schernecke were second team selections. As a defensive back, Johnson was an honorable mention, along with quarterback Byron Hopkins and defensive lineman Ben Helsinger.

Upper Moreland started the season with a pair of SOL American wins – 21-7 over New Hope-Solebury in the opener and 14-9 over William Tennent in Week 2.

The offense hit its stride in Week 3, beating Springfield Montco, 47-28. Despite missing two starting offensive linemen, the offense totaled 400 rushing yards, including 223 and a touchdown from Jackson. The Golden Bears trailed, 28-27, before scoring 20 unanswered in the fourth quarter.

“We just keep playing hard,” Jackson said. “Tonight we played against adversity, we were down a couple players, but we played hard and played as a team. That’s how you come back after you go down.

“(The offensive line) played hard the whole time. When you slack off, even one time, that’s when the running game stops working but they kept pushing, getting to the second level and doing their job. They made me excel through the whole game.”

The points kept flowing the following week when Upper Moreland hammered Plymouth Whitemarsh, 63-35. The SOL American champs scored on every side of the ball – with two kickoff return touchdowns and a defensive score to go along with six offensive touchdowns. Hopkins threw for two touchdowns and ran two in while Jackson ran for 85 yards and two scores. Johnson and Anthony Broderick each caught touchdowns.

“We knew from the gate that this team wasn’t able to hang with us I feel like,” Hopkins said after the Upper Moreland offense punted just one time over 48 minutes. “At practice we had to make sure that we came every day because last year they beat us pretty bad. We had to make sure that we came to practice prepared every day and all the coaches built up a good gameplan for this week. It was a good job by the whole team.”

After a 37-6 non-league loss to Quakertown, Upper Moreland needed to regroup before their PIAA-4A state playoff opener and that’s exactly what they did – putting together their most complete performance of the season with a 35-0 win over Archbishop Ryan. Jackson rushed for 150 yards and two touchdowns while the defense got in on the scoring again – this time a Hassan Johnson 25-yard interception return.

“This is all we’ve been wishing for since freshman year.”

The season came to an end in heartbreaking fashion, losing, 28-27, against Oil City in the state quarterfinals. Jackson scored with less than 10 minutes remaining in the game to give the Golden Bears a 27-22 lead, but the two-point conversion attempt to make it a seven-point game came up empty. Oil City took a 28-27 lead with four minutes left and Upper Moreland’s ensuing drive ended in a turnover. Hopkins threw a pair of touchdowns to Jahaire Johnson and ran one in himself while Jackson rushed for over 100 yards.

Upper Moreland is poised for another big year in 2021. While they are losing some key players to graduation, they will be returning Hopkins, who transferred to Upper Moreland after playing his freshman season at La Salle College High School, and Jackson as seniors.