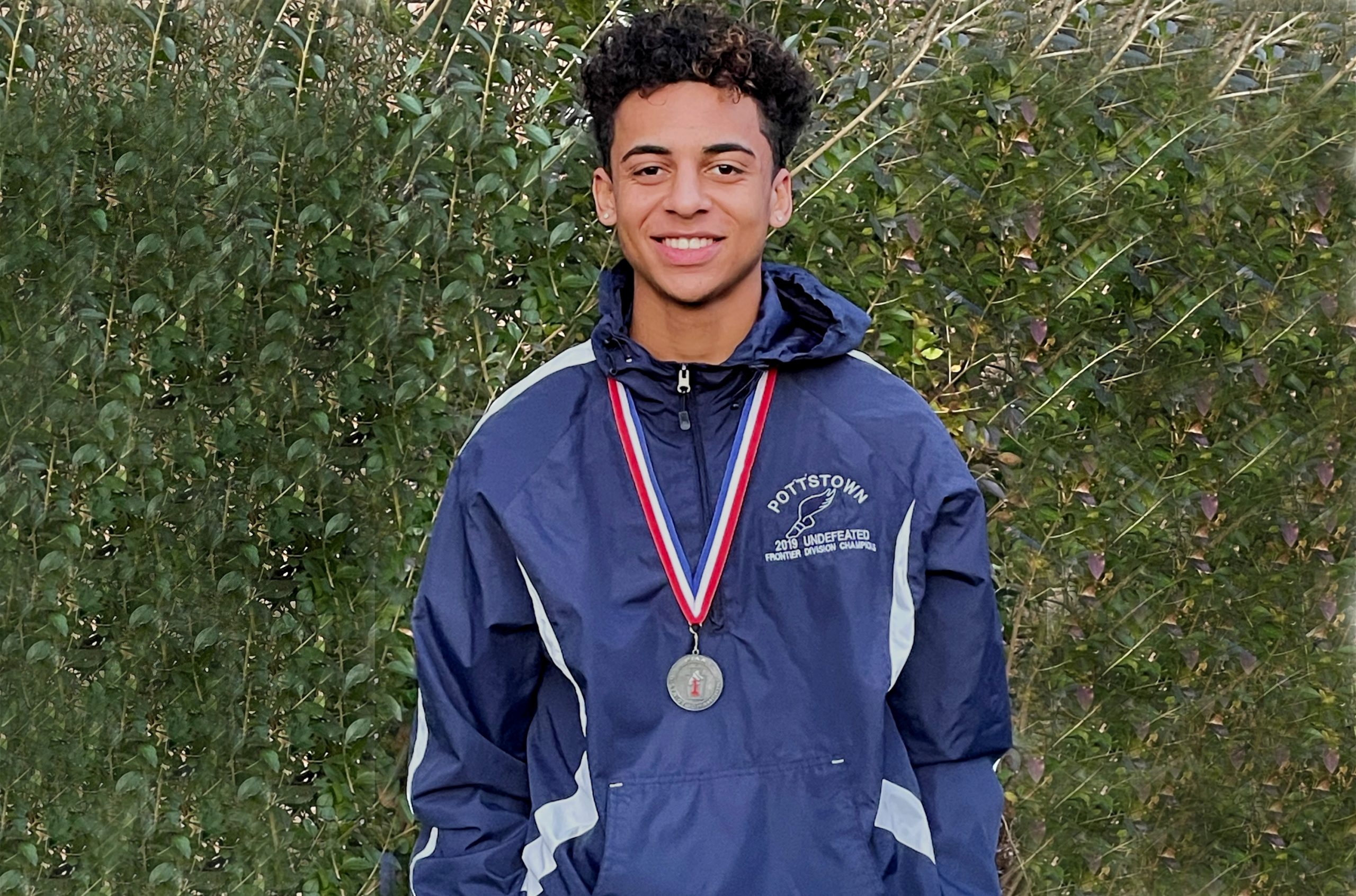 Imagine what he could have done with a full season of competition.

That’s the unanswered speculation surrounding Darius Smallwood’s showing for Pottstown boys cross country this fall. But there’s certainly no doubt Smallwood made the most of his limited 2020 fall high-school campaign … one that was capped by his selection as The Mercury Boys Cross Country Runner of the Year.

The Trojan senior, in his second year of cross country after making the switch from football, distinguished himself as a star in District 1’s Class AA field. He finished a close second to Holy Ghost Prep’s Elliott Puckett in their duel at Tyler State Park in Newtown, in the process qualifying for a second trip to Hershey for the PIAA’s Championship Meet.

“Darius exceeded expectations,” his head coach Stephanie Konnick, noted. “He performed on his own.”

While runners from other Pioneer Athletic Conference teams were working out as a unit in early September, Smallwood and his Pottstown teammates had to wait until their school district reversed an earlier decision to not have the high-school teams participate in contests this fall. The change came into effect in early October, leaving Pottstown sports programs a month behind those of other schools.

For Smallwood and teammates like Christian Albert, the regular season consisted of two meets — a tie-in with Pottsgrove and Upper Merion, a race with fellow late-starter Pope John Paul II — before the District 1 meet originally set for Thursday, Oct. 29. Other PAC schools, by comparison, had seven regular-season meets to work toward districts, which ultimately were staged Monday, Nov. 2, at Tyler State Park in Newtown.

But Smallwood dominated both events, scoring wins by margins of one and two minutes.

“I felt good enough to work out on my own,” he said. “With two races, I felt good for districts.”

Pottstown’s Darius Smallwood races to second place in boys’ 2A at the District 1 Cross Country Championships in 2019. (Bennett Booth-Genthe – For MNG)

The District 1-2A race evolved into a two-man contest between Smallwood and Puckett. Smallwood was content to let the Holy Ghost senior run in front on mmost of the unfamiliar Tyler course, moving in front as they entered the final straightaway to the finish-line chute.

“My plan was to stay behind him and let him block the wind,” he said.

Puckett pushed ahead at the line to finish in 17:28.1. Smallwood was one-tenth of a second in second, the 17:28.2 clocking his fastest of the season.

Smallwood had a bit of a down day at states, placing 41st in the overall field and fourth among contestants from District 1 teams. He clocked a 17:55 while finishing in the 7-8 place spot of his heat.

“I thought I’d be higher,” he said, adding there was about a half-hour wait — the time to run one final heat, then cross-list the results from the four heats — to get his final result. “I wasn’t sure.”

It was still a considerable improvement on his junior-season run at states, where he finished a distant 158th.

Smallwood got into cross country after five years of playing football in middle and high schools, with whom he saw action at running back, wide receiver, quarterback and cornerback. His involvement in distance running, meant to help him prepare for spring track, was encouraged by his mother — Stacy Steele, herself a state medalist in the sport during her scholastic years at Pottstown —  and Albert, who joined Darius at districts and was a frequent workout partner.

“Christian tried to get me into it,” he said. “He saw how I did in track.”

Stacy, who accompanied Darius on bike as he ran the bike trail through Pottstown for his workouts, was similarly encouraging.

“She wanted me to do it, to see how well she did in distance running,” he said. “She wanted to see what happened.”

Smallwood recalled a less-than-encouraging result in his inaugural competition.

“My first race didn’t go well. I wanted to quit,” he said. “But mom said I should stay with it, so I kept practicing.”

Smallwood’s workouts included runs along the Pottstown riverfront, and runs up the bleachers in the football stadium and hills near the high school — most notably the West Street hill. The Pottstown bike trail, though, was the one he favored most.

“He was dedicated in the off-season due to the coronavirus,” Konnick added. “Up until Oct. 4, he and Christian took it upon themselves training on the side.”

Smallwood is looking to run track in college. At present, he’s not sure either about which school he will attend, or if cross country competition will be part of that plan.

“I want to see how spring track goes,” he said, noting his desire to compete in middle-distance events this season.

While Smallwood’s participation in cross country stands to help him prepare for spring track, he sees it being also beneficial in preparation for the upcoming boys basketball season. He played forward his junior year for a Trojan unit that went 5-5 in the PAC (8-14 overall).

“It will help my stamina, that’s for sure,” he said.