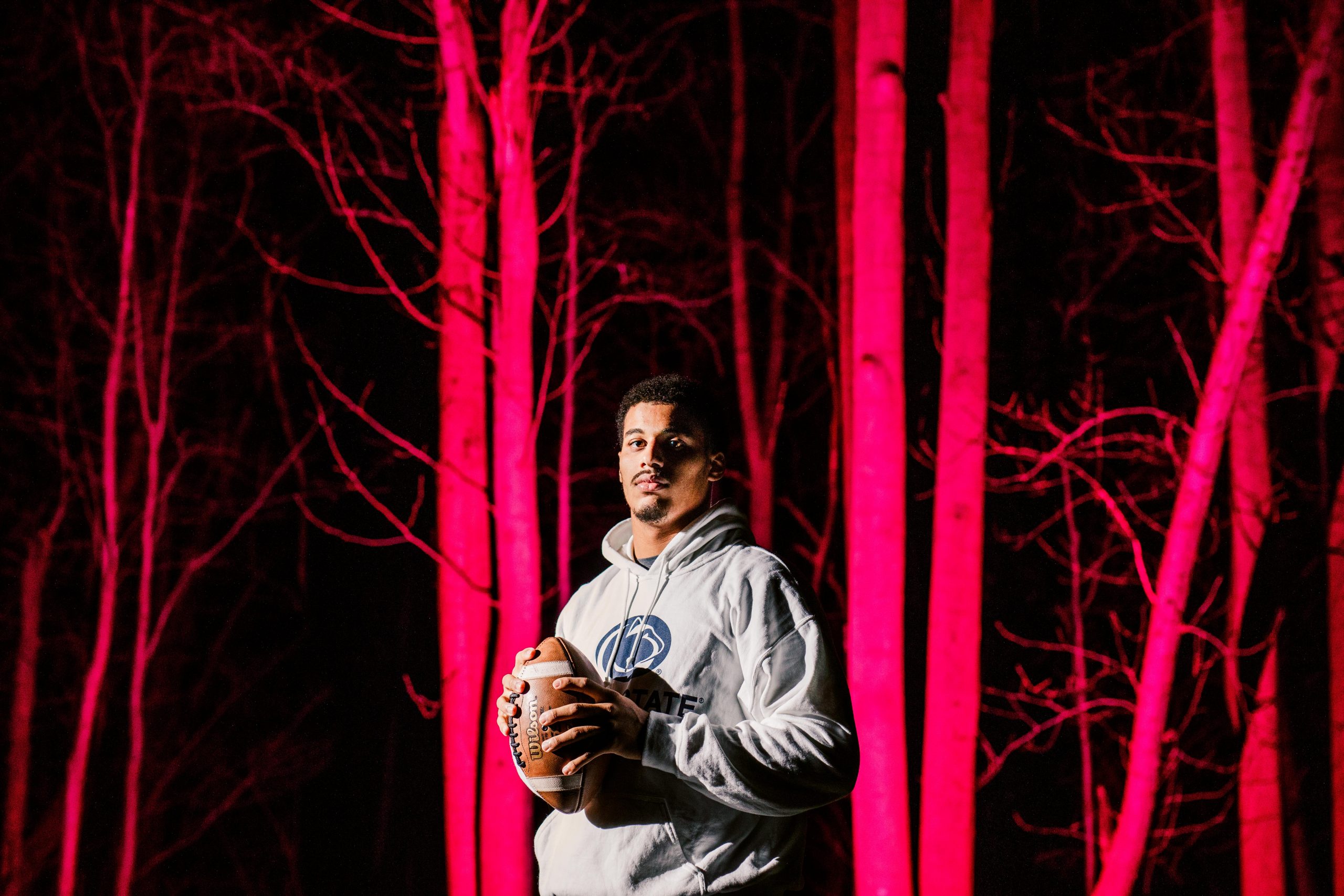 It was one of the first indicators that Reggie, and her husband Lonnie White Sr., might have something special on their hands.

Fast forward a decade and a half and Lonnie Jr. has, in fact, become spectacular. Reggie’s window was swapped out for the Malvern Prep stands, but the awe of watching her only son never waned. Lonnie Jr’s perspective, this year, has been a different one. Veiled by a mask, 2020 has brought on more trials than coronations.

The COVID-19 pandemic robbed him of a spring baseball season, and half of the football season, but a call Lonnie Jr. got from his mom on a club baseball trip in late July, shifted any sense of self-pity back to that laser focus he was born with.

Reggie’s breast cancer had returned, adding another dynamic to an already-weird year of balancing justified disappointment and tremendous success.

“It was kind of hard to just process all of it,” Lonnie Jr. said. “I remember sitting down here and her telling me all that and she started tearing up. My sister was down here and we all gave her a big hug.”

It was a fight or flight moment.

“I think we all cried it out for a few minutes and then were like, ‘we got this,’” Reggie said.

The White family is built on resilience and overcoming and excelling in the face of adversity.

Lonnie Jr. is a three-sport star with football, basketball and baseball, and while the good genes have played a major part, older sister Brianna says she deserves some of the credit, too. “Growing up I was real rough on him, but I think it helped him out a little bit,” said Brianna, who played basketball and softball at Coatesville and is continuing her softball career at Millersville University. “Now we get along great. I support him, he supports me, we push each other.”

“She was just rough on me,” Lonnie Jr. said of his sister. “I was really little. I would do something on purpose to mess with her and then she would take it seriously and just beat me up.”

As hard as Brianna was on her brother, early on, Lonnie Jr. was even more critical of himself.

“He’s playing defensive end, setting the edge, playing off blockers, basically doing it perfect, and he’s mad at himself,” Kiefel recalled of seven-year-old Lonnie Jr. “I said to (head coach Mike Woodward), he has no idea how great he’s going to be, does he?”

Now, there’s no denying it.

There are those who believe Lonnie Jr. could be a first round pick in next year’s MLB draft, but whether or not that is true, he has options.

Originally committed to play just baseball at Clemson University, Lonnie Jr. switched his course when Penn State offered him the opportunity to play both football and baseball.

“It was more because I just didn’t want to put the pads down after high school,” Lonnie Jr. said. “As I got older, I wanted to be closer to home and I always loved Penn State, growing up. I think Penn State was always my No. 1 school if they would offer me for football. When they did, I was just excited and wanted to go there right away.”

In regards to his potential MLB draft status next summer, Lonnie Jr. added: “I think it’s gonna take a lot to get me out of Penn State, but it’s still a possibility.”

Lonnie Jr. yo-yo’d from receiver as a sophomore to quarterback (and 1,000-yard rusher) as a junior and back to receiver this fall. Though he only got four games, his highlights popped off the screen, with his acceleration and long strides making speedy defenders look slow.

“He’s a once-in-a-generation kid,” Malvern Prep coach Dave Gueriera said. “We’re kidding ourselves if we think there’s another Lonnie White. Of course we hope we have another, but he’s just electric with the ball. He’s instant offense. … You wouldn’t know he’s the best athlete in the state. He’s a very endearing guy and the guys want to be around him.” In the abbreviated season, Lonnie Jr. caught 17 passes for 364 yards and four touchdowns, with 95 yards and another pair of scores on seven carries. For good measure, he picked off three passes on defense.

“It hasn’t surprised me,” Lonnie Sr. said. “This is pretty much the path we wanted him to go in. I like when he plays all three sports. Basketball is my sport. It’s just fun to watch.”

Lonnie Jr. carries the demeanor of his father; strong and on the quiet side. If he looked up to dad, athletically, growing up, Sr’s leadership in the most trying year of their collective lives is on full display.

“It’s really, really tough,” Lonnie Sr. said. “I try to look strong and look tough around here, but at the end of the day it’s really tough going through these steps with them. The overwhelming support from friends and family, helping us out… it’s just tough.”

In ways Lonnie Jr. likely doesn’t comprehend fully, yet, being able to go out, lace them up and electrify the football field, with everything going on, is a result of his maturity as a young man.

“He worries about me,” Reggie said of her son. “He won’t sit here and say it, but I see him. He doesn’t even want to go to school because he doesn’t want to pick up covid, because I can’t get it. For him to get out on the field just meant so much for us. … Seeing him out there and having fun and doing the things he likes to do, that means so much to me. I want to see him do well.”

On a sunny Saturday afternoon, Reggie stood on the Malvern sideline and watched Lonnie Jr. tear up Archbishop Wood for 144 total yards and two TDs as the Friars moved to 4-0.

Reggie wasn’t too sure she’d make it to that one, with a chemotherapy treatment the day before. She didn’t know it at the time, but with cancellations due to covid, the win over Wood was Lonnie Jr’s final game for Malvern.

In a year with so much loss and angst, appreciating the things that typically go unappreciated has made a comeback. But for Reggie, soaking up every moment of watching Lonnie Jr. play sports is met with the motherly pain of knowing 2020 has been hard on him too. “I just want everything to be normal for him,” Reggie said. “With me being sick and covid and his senior year. He’s waited four years to finally be a senior in high school and then all this stuff around him is crumbling. I just want the best for him.”

Four years ago, Reggie was diagnosed, for the first time, with breast cancer, but after a lumpectomy and check-ups every six months, things seemed back to normal.

COVID cancelled Reggie’s check-up in March, and it wasn’t until the imploring of her doctor that she finally got back in at the end of July. Stage three breast cancer was the result, and that, mixed with a global pandemic, made Lonnie Jr. consider not even playing this fall.

“It’s scary to think about, if someone would have COVID, you don’t know what could happen,” Lonnie Jr. said. “It was definitely a thought. I definitely wanted to play my senior season and she probably wouldn’t have let me not.”

As fast as this football season went by, Lonnie Jr’s biggest fan is already looking forward to trips out to Happy Valley.

“I can’t wait,” Reggie said. “I obviously think he can play at that level and probably do some work in there. I honestly see him playing. I don’t see him sitting. I don’t say that because I’m just his mom, but he’s so determined and he’s one of those kids who’s not gonna stop until he gets it right. I can’t wait to see what he can do at the next level, in both sports. It’s kind of scary. He’s gonna tear it up, I have a feeling.”

Dad, no doubt, anticipates those moments as well, but tempered his response, true to form.

“Just to see him in the blue and white uniform, that’d be enough for me,” Lonnie Sr. said. Malvern Prep’s Lonnie White Jr. moved back from quarterback to wide receiver for his senior year, and finished second in the county in receiving yards, despite only playing four games. (Nate Heckenberger – For MediaNews Group)

This Thanksgiving is unlike any we’ve ever encountered, with families being told to stay apart and many traditions being altered. When the White family sits down around their table, tales of football and softball and basketball and baseball will surely fly, evoking laughter and nostalgia and dreams of the future.

But there will be an underlying intensity that will be more present than ever before. Being together has never meant more, and the Whites can claim that, times two.

Of all the accolades awarded and future opportunities created, Lonnie Jr will sit there surrounded by the very thing he values most.

“My family,” he said. “They’ve always been there for me.”

Pottsgrove has 7 athletes make college commitments
Down 14 points and a quarterback, Busenkell and Garnet Valley rally for Central League title