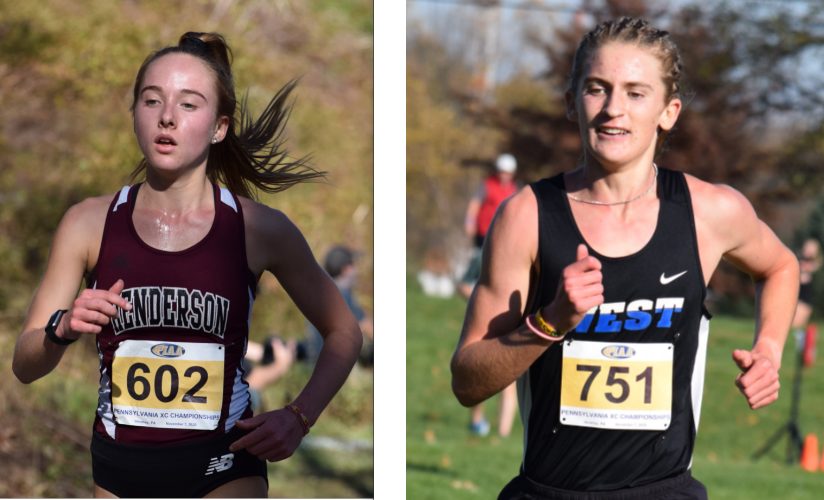 The Downingtown West boys and the West Chester Henderson girls each finished third in their respective team competitions at the PIAA Class AAA Cross Country Championships Saturday afternoon at Hershey.

The Whippets finished third in the Class AAA boys’ team competition with 76 points, behind champion North Allegheny (49 points) and LaSalle (76), who won the tiebreaker for second place. Leading the way for the Whippets individually was senior Aiden Barnhill, who finished in fourth place with a clocking of 16:19. Barnhill finished only 12 seconds behind the first-place finisher, State College senior Brady Bigger (16:07).

“We were really grateful for the opportunity these kids had today,” said Downingtown West cross country coach Scott Burns. “They’ve been working so hard and have persevered through so much it was a special day for everyone out there competing and spectating.

“Pennsylvania has a tremendous amount of talented runners which is part of what makes the state meet so special; we are really proud that we can be a part of that and have athletes that are able to compete at that level.”

Two other Whippet seniors finished in the top 30 in the boys’ race – Declan Rymer (18th, 16:48) and Holden Betz (27th, 17:02). Interestingly, earlier this fall, Rymer edged out Barnhill by the narrowest of margins for the Ches-Mont boys’ cross country championship individual title.

“Aiden, Declan and Holden continued what have been stellar careers at Downingtown West, with another impressive season of cross country, culminating in their hard-fought race today,” said Burns.

The West Chester Henderson girls had three of the top 20 runners at the girls Class AAA race, and finished third in the girls team competition, with 75 points, behind champion North Allegheny (59) and State College (73).

The top Warrior girl was junior Jenna Mulhern, who finished in sixth place, with a time of 19:20. The individual winner was Moon Area junior Mia Cochran (18:28), the defending champion. Earlier this fall, Mulhern won her third consecutive Ches-Mont cross country championship, and in the past three PIAA state cross country championships has finished first (as a freshman), third (last year) and sixth.

Mulhern said, “It was a tough day [for me] – it was definitely not the finish I was looking for. It was very different than usual, due to all the restrictions from the pandemic. The race was split up into four different heats so you really had no idea how fast you had to run to win. I felt good for the first two and a half miles and had a pretty good lead in my heat. Then with about 600 meters to go my legs started to give out. I made it a little farther but then I fell down. It took me a little bit to get back up and it was a struggle to get to the finish line. I’m not really sure what happened but I’m grateful I was able to finish the race for my team.

“The highlight of my day was definitely seeing two of my teammates medal for the first time and the team as a whole coming in third. Being third in the state as a team is a huge accomplishment and I’m so proud of how hard they have worked all season.”

“I thought the girls ran tough as a team in tough conditions,” said West Chester Henderson cross country head coach Kevin Kelly. “I’m proud of what they accomplished this year. They really worked hard and improved by 10 places from last year’s state meet.”

Other top Chester County finishers at the PIAA cross country state championships were as follows:

Unionville senior Ethan McIntyre finished 10th in the boys Class AAA race, with a clocking of 16:45.

Downingtown West sophomore Carolyn Tarpley was 49th in the girls Class AAA race, with a clocking of 21:09.

Devon Prep finished 11th in the Boys Class A race, led by junior Keaton Rush, who finished 65th overall with a clocking of 18:59.