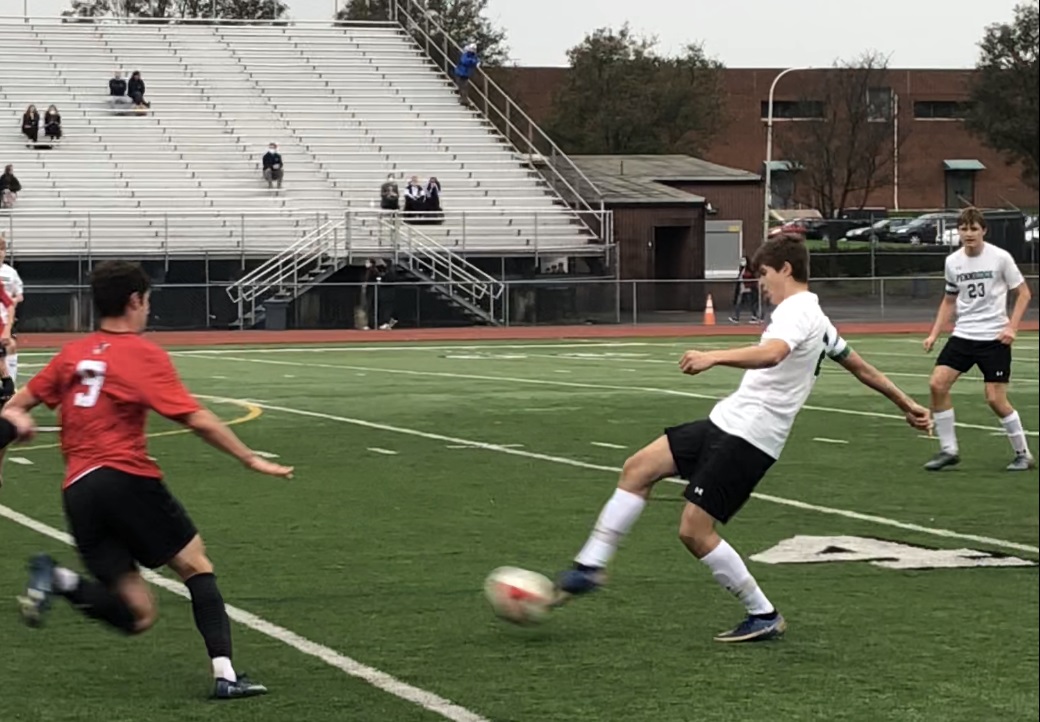 HORSHAM >> Someone was going to earn their playoff spot Wednesday afternoon.

With one of the 16 spots in the District 1-4A boys soccer bracket hanging in the balance, Pennridge traveled to Hatboro-Horsham for a winner-take-all match on the last day results would count toward the posteason. Unsurprisingly, both teams played like everything was at stake in a match that was high-intensity, highly physical and high energy.

Execution on a newer play on a late corner kick proved to be the difference as the Rams edged the host Hatters 1-0 to secure their ability to play next week.

“It was the second chance of a lifetime,” Pennridge sophomore defender Shane Velez, who scored the winning goal, said. “You think after losing your last game it’s the end of your season and your head’s down but this was a redemption chance and we took it. We played hard all 80 minutes and worked together.”

Tuesday night, the Hatters occupied the No. 16 spot in the standings while the Rams were outside looking in at No. 18. While Hatboro-Horsham had the final spot in the bracket, coach Kyle McGrath knew there were too many moving parts to just leave it up to the points system.

Pennridge wasn’t the only team out there looking for a game and McGrath knew if the Rams went elsewhere and won, they could have jumped the Hatters anyway. So, the teams worked it out and rolled the dice on being able to play their way in.

“When I talked to my AD on Monday it was either sit and wait or go play and I’d rather put the boys in a position to go play, win and be in over sit around refreshing the standings (Wednesday night),” McGrath said. “We found a game with Pennridge who was willing to play us, it was a good high school soccer game and they came out on the right end.”

From the opening tap, which the Rams used to try and sneak a goal in with a shot from midfield, the intensity level was through the roof. Very few balls were connected without a tough challenge or tackle and both sides were playing to assert themselves with an edge that was physical but not over the line.

Rams coach Pete Valimont wasn’t surprised the match played out as it did. He knew his guys would be amped up to try and seize a Monday date in the postseason while the Hatters would be desperate to do the same.

“Hatboro is a fantastic team, Kyle is a great coach, he has a great staff and they’re always competitive in their division and we are very, very fortunate we were able to find a game and find a game against good competition,” Valimont said. “This was a district playoff game, the loser goes home most likely and the winner gets a place in the first round. It was an even game in terms of possession and chances, a lot going both ways and we got lucky they didn’t finish theirs and we put one away.”

While the total chances ended up being about equal, the Hatters had the better of them early. If not for a couple brilliant saves from sophomore keeper CJ Dimmick, the momentum would have all been on Hatboro-Horsham’s side. Dimmick’s best save was a leaping parry of a strike from Lucas Howieson about 10 minutes in, pushing the take over the bar for a corner.

Hatters keeper Noah Schlosser was sharp as well, making a tough double-save on Aidan Castle and Connor Gabel on the doorstep late in the first half. Neither team was surprised to see a 0-0 score at the break.

“We knew going in that it was do-or-die and we had to bring the energy,” Pennridge senior defender Colin Monahan said. “It was on us to play as hard as we could start to finish.”

The second half played out much like the first with a bevy of determined challenges, spells of momentum and chances and a lot of energy being put into a winning effort. Grinding into the final few minutes, the Rams were able to give themselves a lifeline with a pair of set pieces.

A foul set up a free kick just outside the box, which the Hatters defended well but conceded a corner kick on with time edging toward the final two minutes. Jake Saville, who had been good at creating chances all afternoon, lined up the service as Pennridge set up.

“It took heart,” Saville said. “Our seniors played great and led us like it was their last high school game. That played a big role in our heart and determination and at the end of it, this is a great team and we deserved it. We took our second chance and we won.”

Monahan said the Rams have been working on some new looks on set plays in their last few practices and with the season on the line, it was time to put them to work.

“We saw North Penn do it with Josh Jones where they put the ball back across and we executed it this time,” Monahan, the Rams’ tallest field player, said. “It came at the perfect time.”

Saville’s service found Monahan at the far post, with the senior heading it toward goal. Right in front, Velez was able to flick the ball home, giving Schlosser no chance to save it.

“It’s all practice,” Velez said. “We’ve been practicing that play for two days and once you get the reps in, it’s just second nature putting that ball in.”

The goal, which came with 1:54 to go, was a far too familiar scenario for the Hatters, who had losses this season with 1.1 and 30 seconds left in double overtime. After the game, McGrath addressed his team and especially the senior class.

“We’ve had a lot of success the last four years and they’re a big part of it,” McGrath said. “We’d been in the playoffs every year leading up to this one, there are two league championships they’ve been a part of and they’re leaving the program in a better place than it was when they came in, which is what you want from a class.”

Pennridge knows it will again have to go on the road and win to continue its season Monday, but Velez said that’s a fee they’re willing to take for the opportunity to be in the playoffs.

“It’s been the situation we’ve been in all year with everybody else, waiting to see if we would even have a season, then doing everything we could to keep playing then we finished second in our division and we were most likely not going to qualify for districts, it’s absolutely unheard of,” Valimont said. “Our guys got a second chance, they knew they put themselves in a hole but they weren’t going to do that today. My hat’s off to them for taking advantage of the opportunity.”