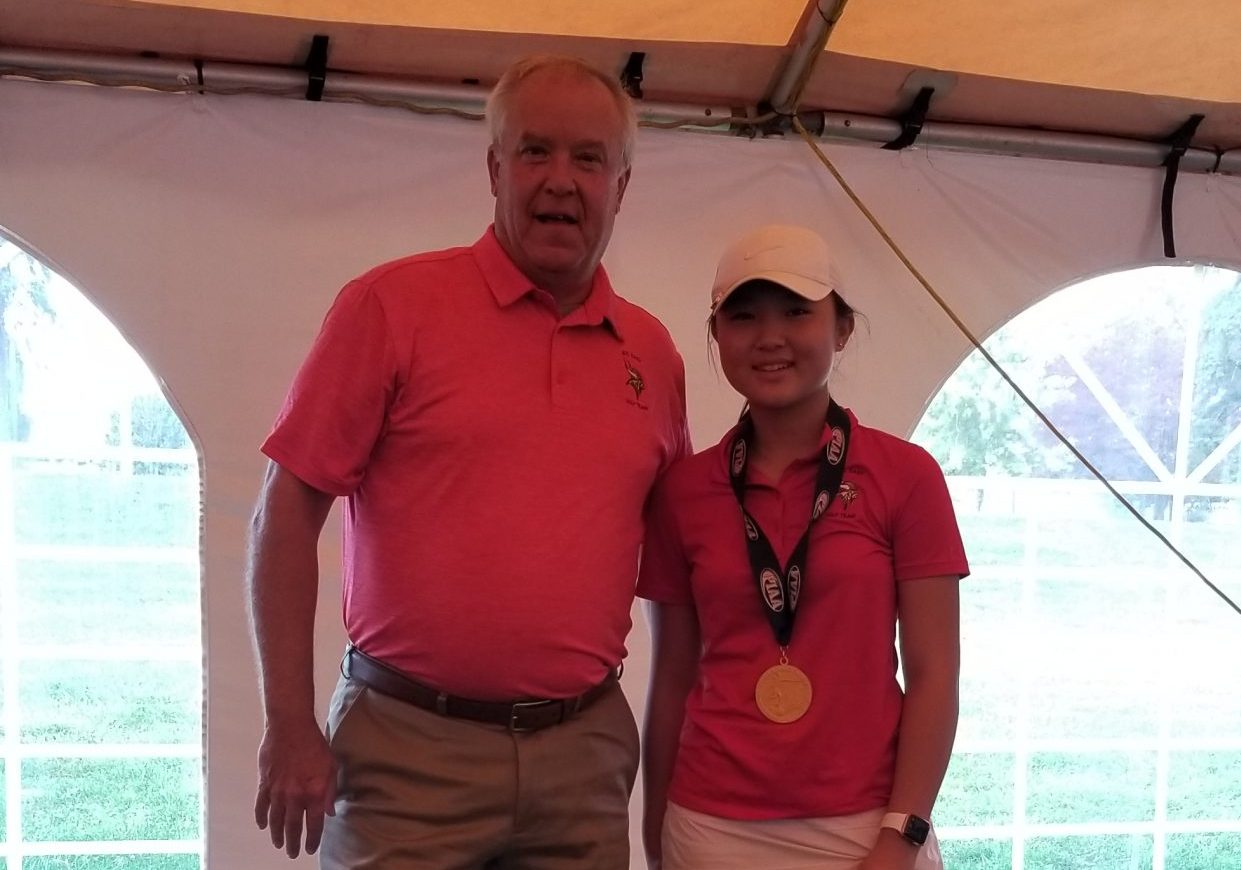 Needing a birdie on the final hole to get into a playoff for first place at the PIAA Class AAA girls’ state individual golf championship, Kim came through with a 3 on the par-4 9th hole (she had started her round at No. 10) at the Heritage Hills Golf Course at York with a drive, a wedge and a 5-foot putt.

Then, on the first hole of the playoff against Emmaus’ Michelle Cox, Kim nearly holed a chip shot for an eagle and holed a tricky 3-footer for the winning birdie.

“Victoria has ice water in her veins,” said West Chester East golf coach Todd Lorback. “She just never lets a round get away from her – she just grinds away and stays close to par. Her Dad and I were so thrilled that she came through with a birdie to draw even on the last [regulation] hole – we’re riding home [from York] on air. At West Chester East, we’re immensely proud of her.”

Coolness under pressure is nothing new to Kim, who last year finished first at the Ches-Mont Girls Golf Championships after getting into a car accident (as a passenger) earlier that day.

Following that Ches-Mont victory, Lorback noted, “Victoria is very composed for a 15-year-old – when she comes off of the course, you won’t know if she shot a two under par, or 10 over par. On top of her sheer talent, she has an ideal mental and emotional temperament for golf, which serves her well when she gets into these tougher competitive environments in the post-season.”

Kim, the 2019 Daily Local News Girls Golfer of the Year, tied for first place at the PIAA Class AAA state individual girls championships last fall, then finished second in the ensuing three-way playoff for the state title. In Tuesday’s sudden-death playoff, Kim turned the tables with a birdie 4 on the par 5 18th hole, the first playoff hole.

Kim started off her birdie at the 18th with a long drive, then hit a pitching wedge to the left fringe of the green. She chipped with a 56 degree wedge and nearly holed it, the ball hitting the edge of the cup before lipping out. The resulting three-foot putt was no gimme, as it broke to the left, but Kim read the break correctly, and the ball dropped into the cup.

“When I saw the [final] putt go in, my first feeling was one of relief,” said Kim. “The playoffs are a little stressful – I was in one last year too. On that last putt, I’d had some three-footers earlier that broke a little bit, just like this one.”

Kim had finished her regulation round with a par 72.

“It was a steady round,” said Kim. “My drives were really good today – I hit only one drive off-line. The course was a little shorter than normal – about 5,600 yards – so I was hitting a lot of wedges and I missed some birdie putts.”

For Kim, who made her two final birdie putts, the initial winning feeling was almost a little surreal.

“The feeling [that I’m state champ] hasn’t really sunk in yet,” Kim said laughingly a few hours after the round.

There were nine Ches-Mont golfers at the PIAA Class AAA individual state championships Tuesday, and several of them contended for the top spot at Heritage Hills.

Downingtown West freshman Nick Gross fired a 2-under-par 69 to finish in third place, two strokes behind champion Calen Sanderson of Holy Ghost Prep, in the PIAA Class AAA boys’ competition. It was the best performance by a freshman boy at the PIAA Class AAA individual state golf championships in 21 years.

Gross birdied the second hole, then took a double-bogey at No. 4, then birdied the next hole and followed up with back-to-back birdies on Nos. 12 and 13, each time with putts of about a dozen feet. He bogeyed No. 15 and followed it up with a birdie on No. 16.

Due to safety protocols related to the COVID-19 pandemic, the 2020 PIAA Class AAA individual golf championships had a one-round format, instead of the usual two-round, two-day format. While players and coaches understood the need for the new format this year, they lamented that it couldn’t be otherwise.

Coyne, who finished fourth at States in 2007 when playing for Downingtown West, said, “It’s a shame that this couldn’t have been a two-day, two-round event – a bigger sample size and a better test.”

O’Sullivan, who enjoyed a stellar fall season for the Cougars, finishing in first place at both the Ches-Mont Girls’ Championships and the District 1 AAA girls tourney, hit 15 greens Tuesday en route to her 2-over-par 74. She shot 38 on the front nine, and 36 on the back nine, finishing her round in style with a birdie on No. 18, where she hit a driver, 9-iron and two putts from 45 feet.

“I thought my round was pretty steady today,” said O’Sullivan, who finished in the top 15 at States as a sophomore.

“I really wanted to go for it,” said Scully. “I was hitting drivers off the tees on all the par 4s, no matter how short they were, I tried to hit my approach shots as close to the hole as possible, and I was putting aggressively, which left me some [relatively] long putts for par.”

Scully, starting her round on hole No. 10, birdied that hole, then earned back-to-back birdies later on the front nine.

“I was happy to shoot well at this difficult golf course,” said Scully, who closed out her high school golf career with a state medal.

West Chester Rustin juniors Eric Miller and Ryan D’Ariano each finished in the top 15 Tuesday, Miller with a 2-over-par 73 (tied for eighth place) and D’Ariano with a 3-over-par 74 (tied for 14th).

“I was really impressed with both of their performances,” said West Chester Rustin golf coach Joe Paris. “Sunday was the first time either of them had played the course, and it’s not an easy course – there are some blind shots. And then, it wasn’t a two-day setup this year, we had to drive up for one day of play, and that’s a two-hour drive.”

Miller, whose finish (tied for eighth) was the best boys’ performance at States in the Rustin golf program history, started his round with two birdies and a bogey on the first three holes. D’Ariano’s placing (tied for 14th) was the second-highest-ever finish at States by a Rustin boy.

Two Unionville boys finished in the top 30 at States. Roy Anderson shot a 3-over-par 74 to finish in a tie for 14th place; and Win Thomas shot a 7-over-par 78 to tie for 28th place.