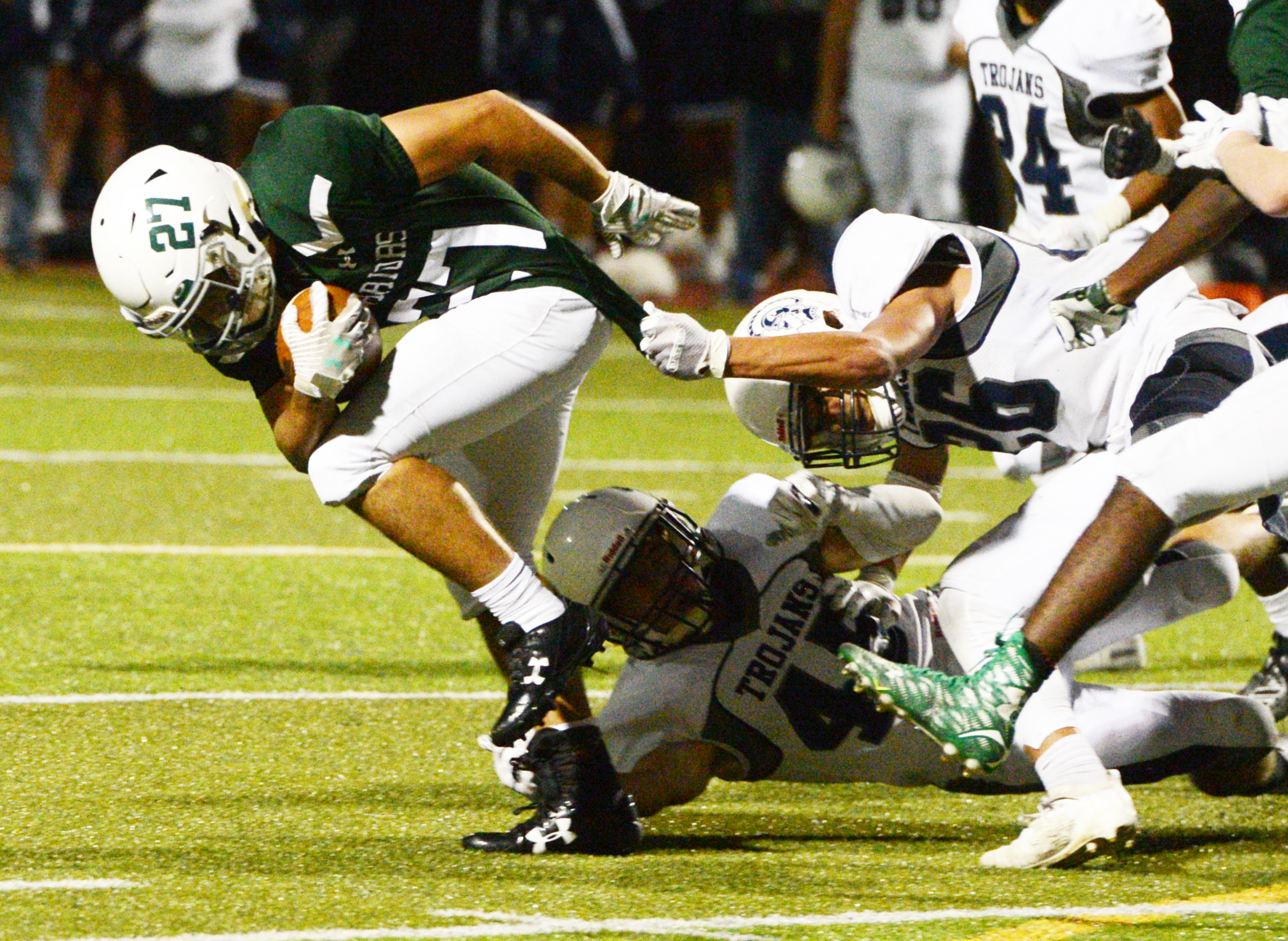 But that was about the only thing the Warrior senior didn’t have to his credit from his team’s game with Boyertown. Carfrey had enough achievements otherwise to establish himself as the monarch of Methacton’s offense as it handled the Bears, 16-6, in arguably the Pioneer Athletic Conference’s most competitive game on the third weekend of the 2020 season. In a trademark ground-and-pound duel between two teams known for favoring the run, Carfrey covered 133 yards while rushing for both Methacton’s touchdown on short-yardage pushes up the middle. He also collected another 36 yards on the receiving end of three of quarterback Mike Merola’s passes, the longest a 33-yarder that helped position the Warriors (2-1) for Tyler Ready’s 33-yard field goal at the start of the second quarter.

“The kid has worked behind other running backs the last couple years,” Methacton head coach Dave Lotier said of Carfrey. “He’s getting the opportunity to show how special he is.”

Averaging about six yards a carry, Carfrey’s bull rushes meshed with the ground performances of Merola (10 carries, 55 yards) and Tyler Weil-Kasper (37 yards on seven totes) in contrast to last week’s game with Owen J. Roberts, where Merola launched 38 passes but completed only 15.

“I want to make me shine, to do my own thing,” Carfrey said. “People talk about me running like other players, but I want to run like me.”

“Powerful, going at them, falling forward,” he said.

Boyertown (0-3) was no slouch on the ground, running for 192 of its 206 yards total offense. Roman Marinello had 78 on 14 carries, quarterback Noah Segal had another 54 and Leo Egbe covered 45 stripes on 10 tries.

“We knew they (Boyertown) would run the ball,” Lotier said. “We executed our game to a ‘T.’ The offensive line, with seniors Quinn Shields, Daniel Meier and Mario D’addesi leading the way, has really come along.”

“The offensive line did a great job,” Carfrey added.

After spotting the Warriors their nine-point lead into the opening minute of the second quarter, the Bears cut the deficit with a 10-play drive started by Egbe returning a kickoff 28 yards to the Methacton 38. Marinello capped the drive by bulling one yard up the middle with 6:18 left in the half, but the conversion kick went wide right of the uprights.

Four other times, Boyertown drove into Methacton territory. Three times, the drives were stalled out on downs; the fourth time, a fumble at the Warrior 22 was recovered by Weil-Kasper and ultimately led to their second TD four seconds into the fourth.

“We know where our deficiencies are,” Boyertown head coach T.J. Miller said. “Our running game is a strength. The offensive line is developing — they’re young guys who are doing great.”

The road will get decidedly tougher for the Warriors. Their next game is against Spring-Ford, sporting a 3-0 record and outscoring its first two opponents by a 3-to-1 average.

Still, they’re putting a game face on the prospect.

“We’re excited for the opportunity,” Carfrey said. “We’re looking at it as a game for first place. That’s how we’re treating it.”

NOTES >> Julia McCann was named Methacton’s 2020 Homecoming Queen, and Jordan Layos the King. The festivities, and a video feed of the game, were staged at the Regal Oaks cinema. … The opponents combined for only 13 pass attempts in the game. Segal had a 14-yard completion to Luke Ordway, and Merola’s second-longest completion was a 31-yarder to Justin Gumienny. … Shields and Josh Cancro distinguished on the defensive side by sacking Segal two plays apart at the end of the first half. Those drops were pivotal toward the Warriors stopping the Bears on downs at their 40.