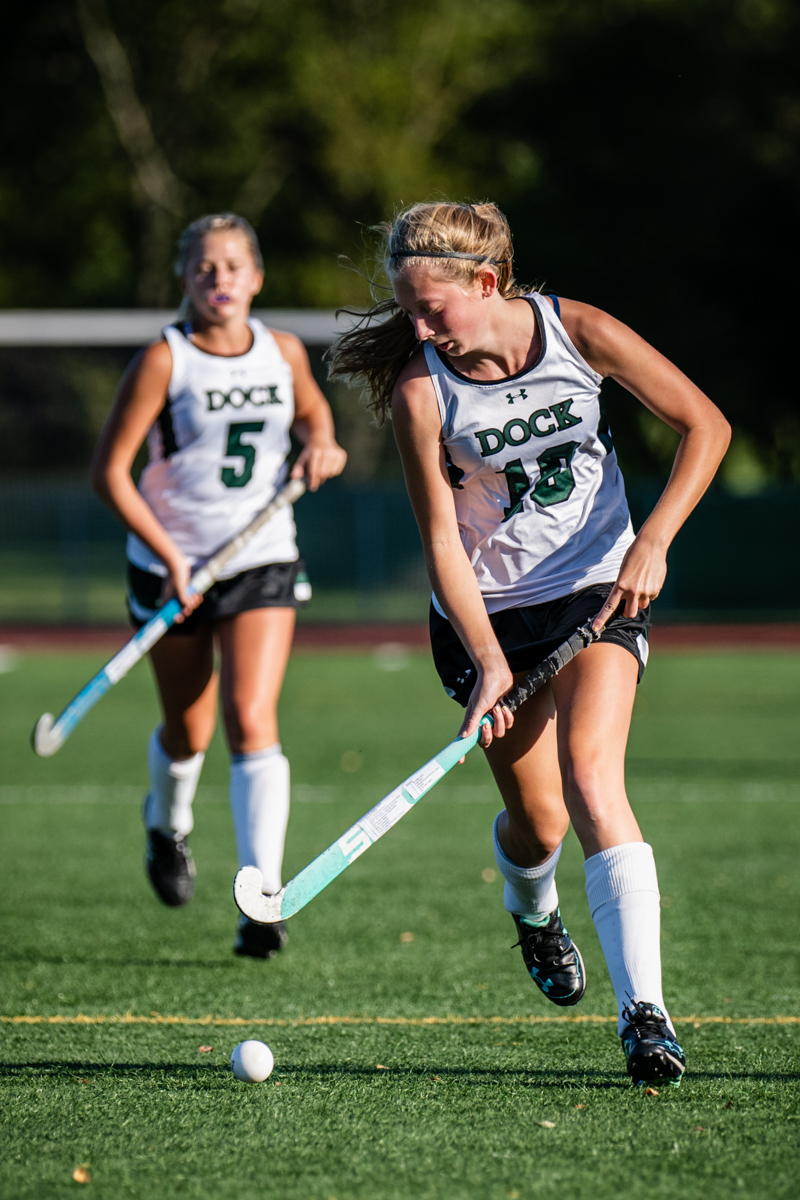 Dock Mennonite's Olivia Veltre (10) moves the ball upfield on her way to scoring one of her two goals against Jenkintown during their game on Wednesday, Sept. 30, 2020. (James Beaver/For MediaNews Group)

The Pioneers have plenty of talented and skilled players, but they’re at their best working together. Facing one of their toughest tests of the season in visiting Jenkintown on Wednesday, the Pioneers leaned on a group effort to sustain their undefeated start.

Substitute Olivia Veltra scored twice and Dock’s defense was sound as the Pioneers topped the Drakes 2-0.

“We play well as a team when we talk to each other,” Dock midfielder and co-captain Olivia Yetter said. “When we do that, we know where each other are and who’s open to pass and that’s what led us to get the goals that we did. When we’re talking, our sticks are down, we’re hearing each other and we’re playing as one.”

Dock controlled most of the four quarters on Wednesday although Jenkintown did start to piece together better offensive stretches in the second half. Drakes senior co-captain Carly Mulvaney noted the game was Jenkintown’s first time on turf this fall and it took them some time to adjust.

Dock Mennonite’s Erin Miles (11) cuts through Jenkintown defenders on her way to a loose ball during their game on Wednesday, Sept. 30, 2020 .(James Beaver/For MediaNews Group)

That adjustment was only made more difficult by the Pioneers’ tenacious midfield, which helped keep the Drakes pinned in their defensive end for most of the first half. Jenkintown didn’t have a shot on goal or a penalty corner in the first half of play, but the visiting defense was also pretty stout against sustained pressure from Dock.

“We’re used to our bumpy and sometimes harsh field but I think we had great intensity on defense and just needed to work more on getting the ball up the field,” Mulvaney said. “I think we’ll learn from this game and we’re ready for the next time we play them.”

Veltre didn’t start, but the freshman had one of the largest impacts on the game with her two finishes in front of goal. Listed as a defender on the Dock roster, Veltre subbed in at outside forward for fellow freshman Eden Schrag, who had picked up a knock early in the game.

With the Pioneers putting pressure on in the second quarter, Olivia Zaskoda was able to push the ball through a couple defenders where Veltre touched it over the line for the lead.

“We did a good job of spreading out and talking a lot, I think that’s something we’ve really gotten better at,” Veltre said. “It’s great that work together and have that sort of bond. We kept talking and telling each other not to get frustrated.”

Jenkintown goalie Jess Spindler (00) is unable to get in front of Olivia Ventre’s shot for the second goal of the game on Wednesday, Sept. 30, 2020. (James Beaver/For MediaNews Group)

Dock has a relatively youthful roster, with five of the seven starting midfielders and forwards on Wednesday either sophomores or freshmen, but also seniors in the right spots to help them. Yetter is a senior anchor at defensive mid, Kylie Godshall is the senior center forward, senior Casey Harper posted a shutout in goal and senior Libby Derstine had some key stops at center back.

Yetter said the captains made sure to express the game with Jenkintown would require the entire team’s best effort across the board.

“Knowing this was going to be a harder game, we had to prepare for it even before the game,” Yetter said. “It started with having that right mindset, taking a deep breath and playing as a team instead of getting all worked up with each other. When we do that as team, we work together and play better.”

Dock started the third quarter how it had left off the second with most of the possession and nearly had a second goal when a shot from Veltre hit off the post. Jenkintown was able recover, again thanks to some tough defending, and began to find its footing offensively.

With the center midfield duo of co-captains Mulvaney and Tanner Lafferty leading the charge, the Drakes broke off a few good runs up the field. Forwards Kaelin DiMaria and Rose McCafferty fed off passes from the middle while midfielder Cady Westkaemper and back Sarah Cummings helped keep Dock from putting the pressure back on the Drakes defense.

“We focused on being first to the ball and that helped us carry the ball up the field,” Mulvaney said. “We have a strong defense, we get low, pressure and talk a lot. This will be a learning experience for us, we only lost two seniors last year so coming back with a lot of varsity players will help us throughout the season.”

Dock Mennonite’s Sarah Curry (5) gets to a loose ball just in front of Jenkintown’s Kaelin DiMaria (4) during their game on Wednesday, Sept. 30, 2020 at Dock Mennonite Academy. (James Beaver/For MediaNews Group)

With time starting to run low but Jenkintown not folding, the Pioneers got a game-sealing goal with a bit less than three minutes to play. Freshman Erin Miles fired the ball from the edge of the circle, where outside forward Celeste Derstine was able to slip a pass across the front of goal to Veltre, who tapped in the near-post finish.

“I just tried to stay on the posts and be ready to put the ball in the goal,” Veltre said. “I didn’t expect it, but it’s all good. We’re doing really well together, I think we have a really good team and while I’m just getting to know a lot of the girls, they’re all super-nice and we seem to work really well together.”

Dock’s sum of its parts approach has led to a 3-0 start and it’s something the team’s seniors want to continue fostering through the remainder of the season.

“We have a good group of girls, which is super-important because everyone is so nice and so loving toward each other, it lets us play well as a team,” Yetter said. “We win as a team, lose as a team and score as a team. Everything we do is really team-oriented and that means we have a team on and off the field.”